A science team measured methane concentrations up to 50,000 times standard levels inside the crater. 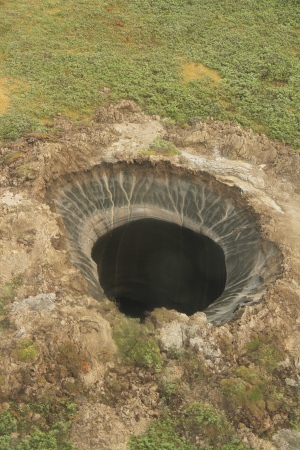 The first mysterious crater spotted by helicopter in the Yamal region of northern Russia. Image via Nature.

UPDATE July 31, 2014. Stories are popping up fast in various media this afternoon about a likely source of a reported, mysterious hole in permafrost in the Yamal region of northern Russia. This hole was spotted by a helicopter pilot in mid-July; reindeer herders reported a second hole some days later. Eric Holthaus of Slate said that there is now:

… new (and definitive) evidence … that the Siberian holes were created via methane released from warming permafrost.

The evidence has come via the journal Nature, which published a story on its website today (July 31) featuring the findings of Andrei Plekhanov, a senior researcher at the Scientific Centre of Arctic Studies in Salekhard, Russia, and his team. This is the team that was sent in to investigate the first hole shortly after it was found. Holthaus said:

That team measured methane concentrations up to 50,000 times standard levels inside the crater.

The story in Nature said:

Air near the bottom of the crater contained unusually high concentrations of methane — up to 9.6% — in tests conducted at the site on 16 July … Plekhanov, who led an expedition to the crater, says that air normally contains just 0.000179% methane …

Plekhanov and his team believe that it is linked to the abnormally hot Yamal summers of 2012 and 2013, which were warmer than usual by an average of about 5°C. As temperatures rose, the researchers suggest, permafrost thawed and collapsed, releasing methane that had been trapped in the icy ground.

Last week, the New York Times’ Andrew Revkin interviewed a Russian scientist who had also visited the hole and came to similar conclusions.

This newly reported evidence, just coming to light today, seems particularly scary given the story earlier this week about what the University of Stockholm called “vast methane plumes” found by scientists aboard the icebreaker Oden, which is now exploring and measuring methane release from the floor of the Arctic Ocean. 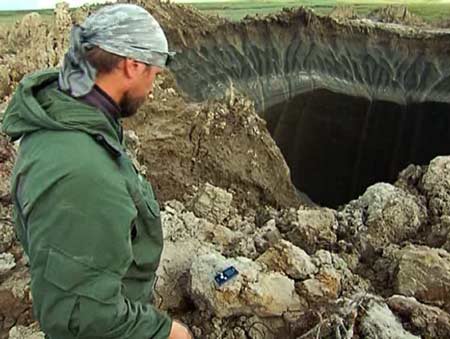 Andrei Plekhanov, senior researcher at the Scientific Research Centre of the Arctic, stands at the first large crater, discovered recently in the Yamalo-Nenets Autonomous Okrug region of northern Russia. Image via China Post. 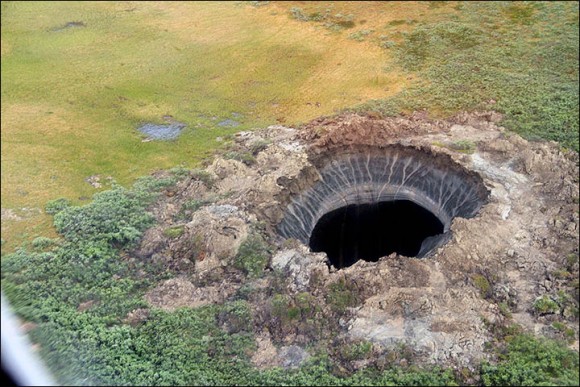 The Moscow Times reported this week that reindeer herders in far northern Russia have found a second mysterious giant hole. According to these unconfirmed reports, the second hole is about 30 kilometers (20 miles) away from a first large and mysterious hole in the Russian permafrost, which made a big splash in social media after the Siberian Times reported it in mid-July 2014.

Last week, Russian scientists estimated the first hole, which has smooth sides and a lake at its bottom, to be around 30-60 meters wide (100-200 feet) wide. The second crater is said to be smaller than the first, only about 15 meters (50 feet) wide, and it’s reported to be filled with snow.

Both craters (assuming two exist) are located within the permafrost of the Yamalo-Nenets Autonomous Area (YNAO) of the Russian Arctic. Moscow Times said that both craters appear to have formed relatively recently.

News of the crater was first spread by local reindeer herders, who said a celestial body had fallen and then a flash had occurred on 27 September 2013 in this region (56 miles from the village of Antipayut).

A different reindeer herder only said that he saw smoke, haze, and then a flash. 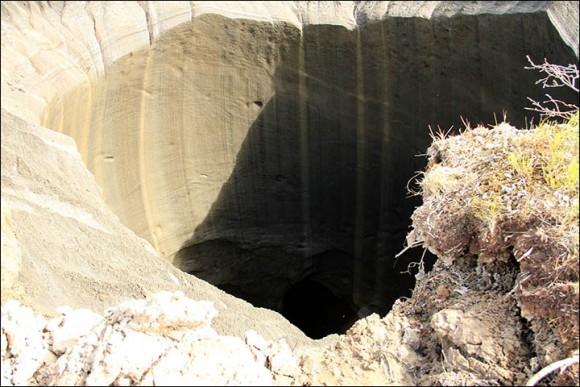 Here is the first crater again. Its walls appear evenly cut, and there is water, from melting permafrost, cascading down their sides. Photo by Andrey-Naumenko via Siberian Times. 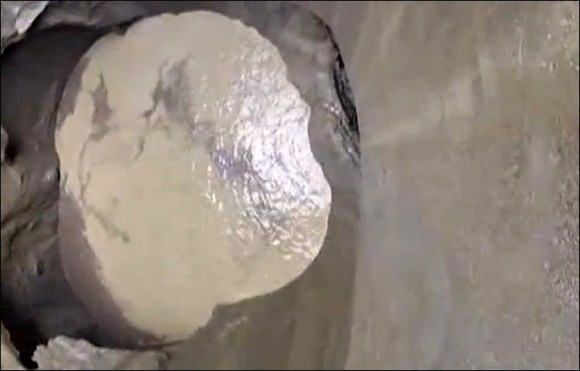 The first crater appears to be about 70 meters deep. It has an icy lake at its bottom. Photo by Andrey-Naumenko via Siberian Times.

The strange holes in the Earth found in the northern tundra on Russian territory in July could mean the beginning of irreversible changes in the climate of our planet. According to Russian scientists, the most likely reason for the formation of such holes is the emission of natural gas, which may be caused by global warming …

Glaciologists from the sub-Arctic research and study unit in Tyumen say that permafrost temperatures are rising steadily in the region of the Bovanenkovskoye gas field on the Yamal Peninsula in the Russian Arctic, near where the first hole was discovered. Forty years ago it was on average about eight degrees below zero, but now in certain areas it is only minus three.

Scientists who examined the first hole theorized that it could have been created when a mixture of water, salt and gas exploded underground …

The area, which has one of Russia’s richest deposits of natural gas, was covered by sea about 10,000 years ago, and vast salt deposits were left behind.

Global warming, causing an alarming melt in the ice under the soil, released gas causing an effect like the popping of a champagne cork. 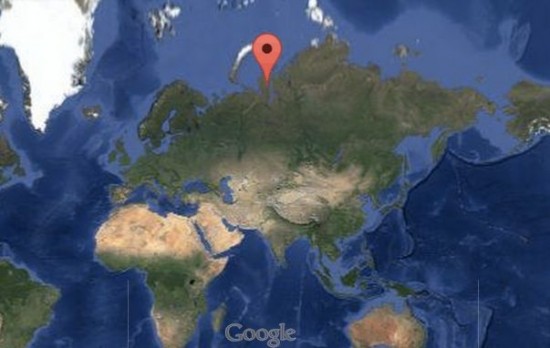 Approximate location of two reported large holes in the permafrost in the Yamalo-Nenets Autonomous Area (YNAO) in the Russian Arctic.

Bottom line: A second mysterious crater has been found on the Yamal region of northern Russia, according to media reports.