Sand dunes can ‘communicate’ with each other

For the first time, a new experiment from the University of Cambridge has shown how sand dunes “communicate” and interact with each other as they move.

Sand dunes aren’t alive, of course, but they do share a characteristic of living creatures. They move, migrating across the ground due to blowing wind or flowing water. Now – using an experimental dune racetrack – scientists say they’ve taken a giant step forward in explaining how sand dunes also interact and “communicate” with each other. They’ve learned that, as sand dunes move, they repel their downstream neighbors.

The researchers, from the University of Cambridge, announced their findings on February 4, 2020, and the peer-reviewed research paper was published the same day in Physical Review Letters.

It’s well-known that active dunes migrate. The speed of their movement is related to their size: smaller dunes move faster and larger dunes move more slowly. But just how dunes interact with each other is something that hadn’t been well documented, until now. As Karol Bacik, the paper’s first author, explained in a statement:

There are different theories on dune interaction: one is that dunes of different sizes will collide, and keep colliding, until they form one giant dune, although this phenomenon has not yet been observed in nature. Another theory is that dunes might collide and exchange mass – sort of like billiard balls bouncing off one another – until they are the same size and move at the same speed, but we need to validate these theories experimentally.

Now both of those possible explanations are considered unlikely, at least according to these researchers. According to Nathalie Vriend, who oversaw the new lab study:

We’ve discovered physics that hasn’t been part of the model before. 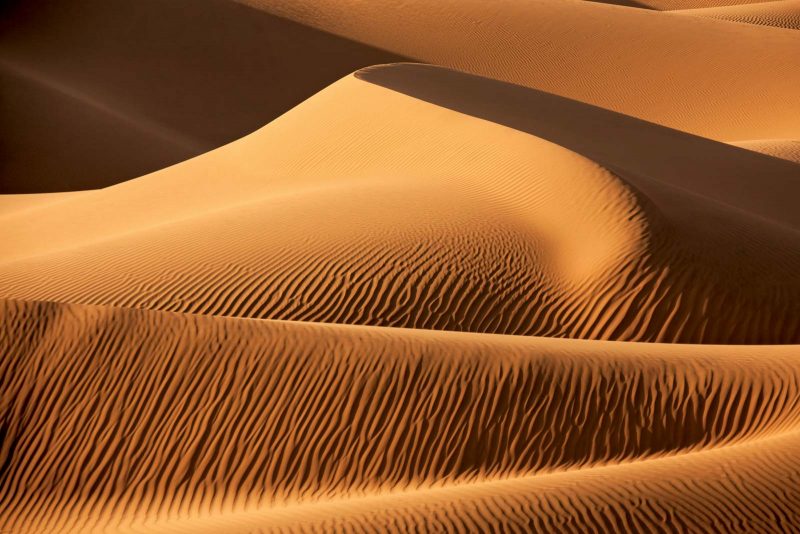 Most of the work in modeling the behavior of sand dunes is done numerically, but these researchers constructed a special facility – the dune racetrack mentioned above – just for these experiments. It let them study the long-term behavior of the dunes. They used a circular water-filled flume – a human-made channel for water – watching the movement of the dunes in it for hours as the flume rotated. The circular tank was better than using ordinary straight flumes, they said, since in a straight flume the dunes could only be watched until they reach the end of the tank.

The researchers also used high-speed cameras, with which they could track the movements of the sand down to the scale of a single grain.

Bacik said he hadn’t originally meant to study the interaction between two dunes:

Originally, I put multiple dunes in the tank just to speed up data collection, but we didn’t expect to see how they started to interact with each other.

… the researchers observed that two identical dunes start out close together, but over time they get further and further apart. This interaction is controlled by turbulent swirls from the upstream dune, which push the downstream dune away. 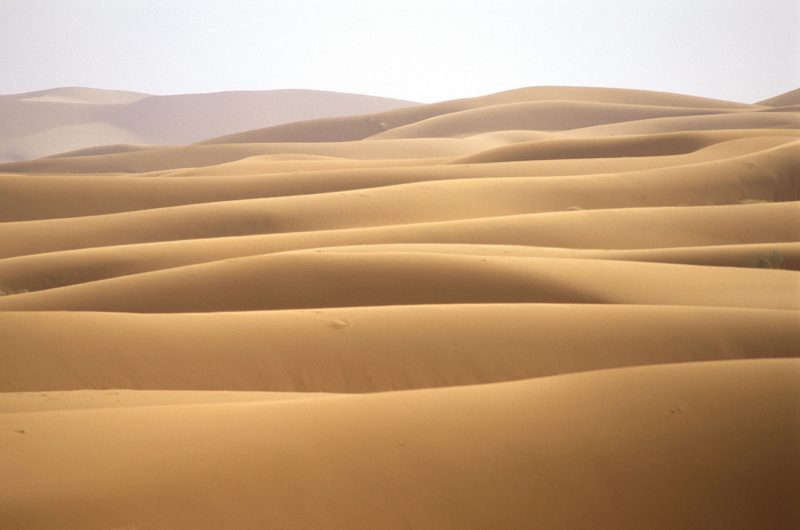 A dune field – a region with many sand dunes close together – in the Sahara desert. Image via Goodshoot/ Jupiterimages/ Encyclopaedia Britannica.

This downstream movement is normal, the researchers explained, since – when sand is exposed to wind or flowing water – it tends to form a dune shape and gradually move downstream, as in a river. This can happen in deserts, on river bottoms and even sea beds. Typically, many dunes form in a region, creating a dune field.

At the beginning of this experiment, the researchers observed finer detail than has ever been seen before. They observed that two dunes within the flume might have the same shape and volume. As water began flowing over the dunes, they began to move, as expected.

But then something unexpected happened. The researchers thought they’d see dunes moving at the same speed. Instead, the two dunes started moving at different speeds. The dune in front initially moved faster than the dune behind it, but then it gradually slowed down, until both dunes ended up moving at about the same speed.

It’s this variable speed of movement with respect to each other that these researchers are calling “communication.” A key observation in explaining it was the pattern of flow across the dunes. The front dune deflects the flow, creating swirls on the dune behind it. This deflection pushes the back dune farther away from the front dune, effectively slowing down the back dune’s movement relative to the front dune. As Vriend explained:

The front dune generates the turbulence pattern which we see on the back dune. The flow structure behind the front dune is like a wake behind a boat, and affects the properties of the next dune.

The longer the experiment ran, the further apart the two dunes became. Eventually, they formed an equilibrium – a state of being balanced – on opposite sides of the flume, where they then remained at 180 degrees apart.

The edge of Namib dune, part of the Bagnold dune field in Gale crater on Mars, as seen by the Curiosity rover in 2015. Image via NASA/ JPL-Caltech/ MSSS/ Thomas Appéré.

Although the experiment used water to move the sand grains, the researchers say that the results can probably be applied to wind-driven dunes as well. From the paper:

We conjecture that a similar mechanism may be present in wind-driven dunes, potentially explaining the observed robust stability of dune fields in different environments.

The findings could be useful in trying to divert the migration of large dunes when needed, such as when they encroach on populated areas. This can be done by tracking the movements of clusters of dunes over long periods, using both ground observations and satellite imaging. In this way, the future movements of the dunes could be better anticipated beforehand.

It would also be interesting to see if these observations could apply to sand dunes on other planets or moons, such as Mars and Titan. Both worlds have large expanses of dunes, which in some ways are quite similar to dunes on Earth. Titan’s have only been seen from above the atmosphere, by the Cassini and Huygens probes, but on Mars, rovers and landers have been able to see them up close and even dig into them and sample the sand for analysis. Venus and even Pluto are also now known to have their own dunes. On Pluto, the “sand” is composed of methane ice particles. How cool is that? It will be interesting to see if these otherworldly dunes communicate in a similar manner to their earthly counterparts. 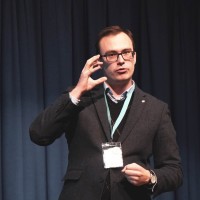 Bottom line: Sand dunes can “communicate” with each other as they move, a new study finds.