Which cities are most at risk for a natural disaster?

Tokyo-Yokohama, the Pearl River Delta and Osaka-Kobe are the riskiest metropolitan areas in the world. Otherwise … does your city make the list?

Swiss Re – the world’s second-largest reinsurance company, with headquarters in Zurich – has released results of a new study that looks at the human and economic risks from natural disasters faced by over 600 cities around the globe. The report is called Mind the risk: A global ranking of cities under threat from natural disasters, and it’s based on Swiss Re’s risk models and detailed available hazard data. Los Angeles is the only city in the U.S. that makes the top 10 list for “most people potentially affected” (aggregate risk of five perils including earthquakes, tsunamis, storms, storm surge and river flooding). After all, it has a large and densely packed population, located along the earthquake-prone Ring of Fire, on a coast. When you look at “working days lost,” however, San Francisco, New York, Paris and Amsterdam-Rotterdam also make the top 10 list. 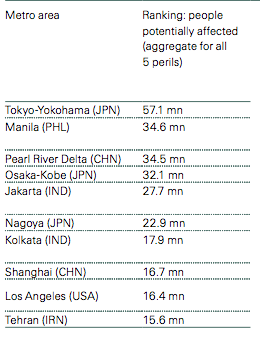 Screen captured from Swiss Re, via Treehugger. 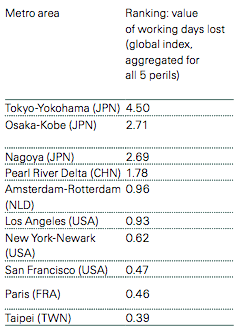 Screen captured from Swiss Re, via Treehugger.

Swiss Re said its report provides:

… a global risk index comparing the human and economic exposure of 616 cities around the world. Together, these are home to 1.7 billion people and produce a combined GDP of USD 35 trillion, half of the world’s total economic output.

The report points out some of the world’s fastest-growing metropolitan areas are situated along China’s coastlines. For example, the Pearl River Delta – where the Pearl River flows into the South China Sea, one of the most densely urban areas in the world and a primary hub to China’s economic growth – shows up as being at risk in several categories. Easy to understand why: more people, more risk. Besides being exposed to frequent tropical cyclones and storm surges, many cities along China’s coast are also located in zones of high seismic activity (the Ring of Fire again, as in L.A.) including Tokyo, Taipei and Manila. According to the report:

When looking at their exposure to natural disasters, most of the world’s riskiest cities are therefore situated in East Asia, notably China, Taiwan, the Philippines and Japan. But there are different ways of looking at risk exposure. No doubt,
human life comes first. In that respect, Tokyo-Yokohama,the Pearl River Delta and Osaka-Kobe are the riskiest metropolitan areas in the world. 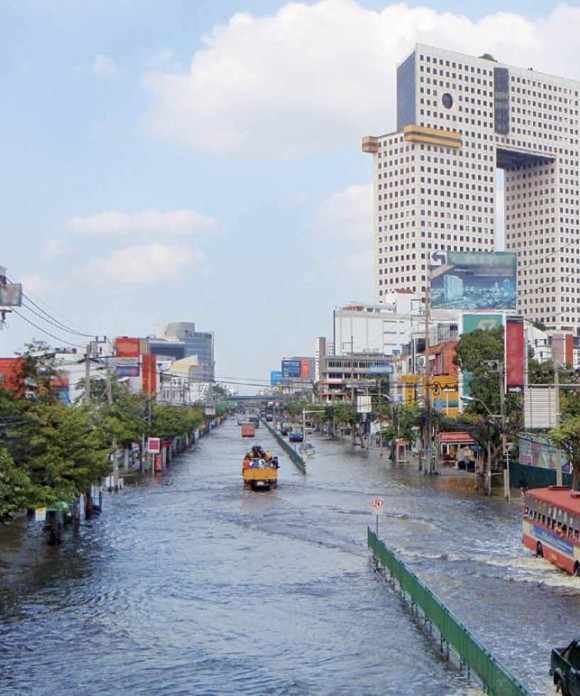 Roads in the North Bangkok Business District are submerged in floodwaters in November 2011 after heavy rains during the annual monsoon season. The Thailand flood of 2011 cost the insurance industry USD 15 billion, the largest insured fresh water flood loss ever. Image and caption via Swiss Re.

What else does the report say? If you’re really interested, it’s well worth reading. It has many graphs and charts and is very interesting. What follows are some highlights:

The vast majority of cities are prone to river flooding. That’s because, when cities were founded, they tended to be founded near rivers. According to Swiss Re, nearly all large metropolitan areas are in danger of flooding to some degrees, because they are situated on river flood plains or along river deltas. India and China, apparently, face the world’s biggest threat in this regard.

Earthquakes are prevalent in many locations. I’ve mentioned the Ring of Fire a couple of times already in this post, and indeed many cities are located along this area of high seismic and volcanic activity around the Pacific Ocean. Swiss Re says in its report:

Besides their proximity to the sea, many of these settlements sit in flat basins often characterized by soft soil conditions, which make shaking intensities even stronger. Earthquakes in these areas can also result in soil liquefaction, a phenomenon whereby the saturated soil substantially loses its strength and reacts like a liquid.

Storms endanger mostly urban areas on the coast. Once again, according to Swiss Re, the cities of eastern Asia are most at risk here. We’re talking here about the danger of wind storms. Storm surge is something different (see next paragraph). Tropical cyclones, which we call hurricanes in the west, are known as typhoons in Asia. According to the report, eight out of the 10 cites most heavily exposed to wind danger are exposed East Asian typhoons.

Tsunami risk dominates in the Pacific. The cities most exposed to tsunami risk are in Japan, and the March 11, 2011 earthquake and tsunami there illustrated so tragically. Japan’s location along the active faults of the western Pacific are what make it vulnerable. Tokyo-Yokohama and Nagoya, each with around 2.4 million people who are potentially affected, top Swiss Re’s tsunami rankings. Osaka-Kobe (1.8 million), Shantou (0.7 million) and Kolkata (0.6 million) complete the list of the five most tsunami-exposed metropolitan areas.

Click map to view larger. | Relative risks for earthquakes (red) and tsunamis (orange), for cities around the world. While many cities are at risk for earthquakes, Japan has the highest risk for tsunamis. For details on this map, see Mind the risk: A global ranking of cities under threat from natural disasters

Click map to view larger. | Relative risks from river flooding, for cities around the world. Many cities are vulnerable to river flooding because cities tended to be built near rivers. For details on this map, see Mind the risk: A global ranking of cities under threat from natural disasters

Click map to view larger. | Relative risks from storms (green) and storm surges (blue), for cities around the world. As for many other perils, East Asia is most at risk. For details on this map, see Mind the risk: A global ranking of cities under threat from natural disasters

Bottom line: A study by Swiss Re – released September 18, 2013 – outlines the risk from natural disasters for 616 cities around the world, and identifies the top 10 cities most at risk in various categories.