Yes, this winter was cooler than last winter. But it still ranked as the 20th warmest winter recorded since record-keeping began.

To meteorologists, spring begins March 1. Looking back over the past three months, the 2012-2013 winter (December, January, February) was significantly cooler than the winter of 2011-2012. But don’t be misled. This past winter was still well above average in contrast to longterm records. It ranked as the 20th warmest winter recorded since record-keeping began. In late 2012-early 2013, the majority of the contiguous United States was relatively warmer and wetter than average. The U.S. Southeast and Midwest saw improved drought conditions by January and February of this year. However, the Central Plains and Mountain West remained relatively dry and saw very little drought relief. In this post, we will look at the weather trends that occurred in December, January, and February for the winter of 2012-2013 in the United States. Can you guess which month was the warmest/coolest of the three?

Sources for this post include Climate.gov and the National Climatic Data Center, among others. 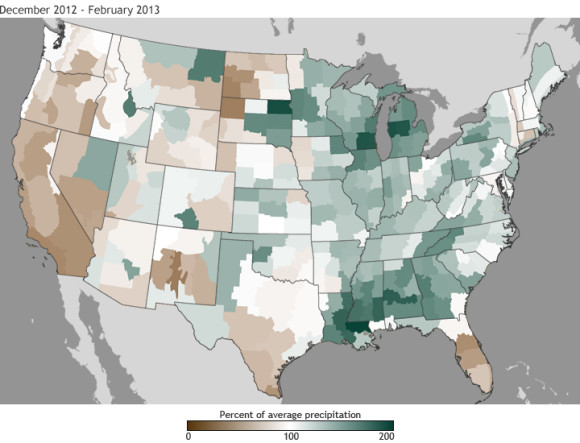 The weather pattern was quite active across the eastern United States towards the end of January and into February 2013. As a ridge built across the western U.S., troughs or areas of low pressures pushed into the eastern United States. Generally, precipitation amounts were higher east of the Mississippi River and rainfall totals were well below normal west of the river. Also, the areas that received more rainfall than others also experienced warmer temperatures than average. Typically, you associate warmer temperatures with dryer conditions. However, that was not the case for the eastern U.S. over the past two months. Many states in the Great Lakes region and across the U.S. Southeast, including Michigan, Wisconsin, Illinois, Louisiana, Mississippi, Alabama, and Georgia had winter precipitation totals ranking among their ten wettest, as the green areas of the precipitation map indicates from the above image. The drought continues across the western U.S. where fears of another intense wildfire season could develop in the spring and summer. Last year, we saw hundreds of thousands acres that were burned due to a very active wildfire season. 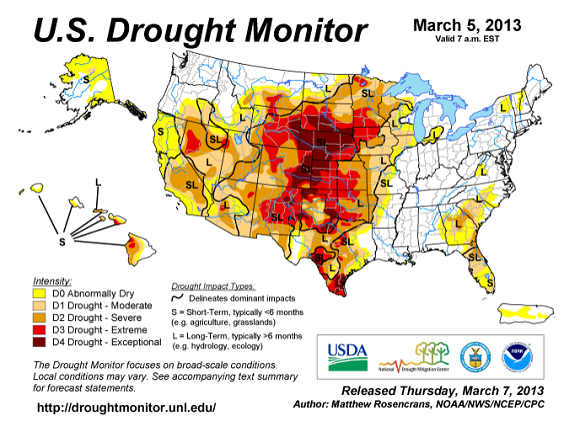 Drought monitor as of March 5, 2013. Dry conditions continue west of the Mississippi River. Image via NOAA

Temperature rankings across the contiguous United States for December 2012. Image via NOAA

For the contiguous United States in December 2012, temperatures were 3.4°F above the 20th century long term average. December 2012 was ranked as the 10th warmest December on record. Temperatures remained above average east of the Rockies, and the U.S. Northeast experienced the 7th warmest winter on record. Meanwhile, rainfall totals were 0.51 inches above average making December 2012 the 20th wettest December on record. Parts of the Northeast and Ohio River Valley experienced wetter than normal conditions during the month of December. Nevada, Maine, New York, Ohio, Pennsylvania, and Utah all had a top-10 wettest month.

Temperatures remained above average across the eastern U.S. while the west coast saw cooler than average temperatures. Image via NCDC/NOAA

The average temperature for the contiguous United States in January 2013 was 32.0°F, which was 1.6°F above the 20th century average. January 2013 was ranked as the 39th warmest January on record. Although we saw more Arctic outbreaks occur across the eastern United States, these outbreaks of colder temperatures did not affect the monthly average temperatures from dropping below average. The warmest parts of the United States in January 2013 occurred in the Southeast, where Georgia and Florida had their 11th warmest January on record. January saw relatively average precipitation conditions across the U.S. The Southern Plains and Mid-Atlantic had wetter than average conditions with Louisiana, Mississippi, Tennessee, Michigan, and Virginia each had January precipitation totals ranking among their 10 wettest. Meanwhile,the drought areas across the central and southeastern U.S. continued to see below average precipitation. California, Connecticut, and Florida all experienced one of their 10 driest Januarys. Snowfall across the region was slightly above average with a 1.4 million square miles of snow cover extent. 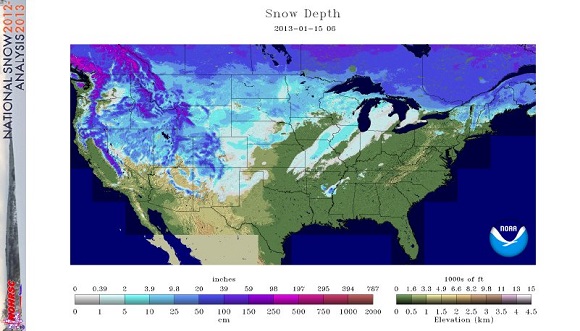 Temperatures were only 0.8°F above the 20th century average for the contiguous U.S. in February 2013. Generally, February 2013 was the “coldest” month of the 2012-2013 season across the contiguous United States. Average temperatures occurred throughout the majority of the U.S., but the U.S. Southwest experienced below-average temperatures during the month. The only areas that saw slightly above average temperatures were across the Gulf coast and the states that border Canada. The west coast and the Rockies continued to be below average in rainfall. California experienced its fifth driest February ever recorded a precipitation total of 0.57 inch which was 3.05 inches below average. Meanwhile, Oregon was the seventh driest February on record with a precipitation total of 1.20 inches which was 2.00 inches below average. The U.S. Midwest, Central Plains and Southeast saw above average rainfall, which was good news for those in the drought areas. The most rain that fell during this month was in Georgia where they had its wettest February on record with 9.92 inches of precipitation which was 5.42 inches above average.

Bottom line: Winter 2012-2013 was warmer than last year, but still well above average in contrast to longterm records. It ranked as the 20th warmest winter recorded since record keeping began. Granted, it was more “winter-like” this year than a year ago, when we experienced the fourth-warmest winter ever recorded. Precipitation was above average across the eastern United States this year, while dry conditions continue across the western and central United States. The overall setup of our weather this winter could easily influence our weather for the spring season. For example, drought conditions in the Plains could influence a less active severe weather season in the spring thanks to the lack of moisture in the region.