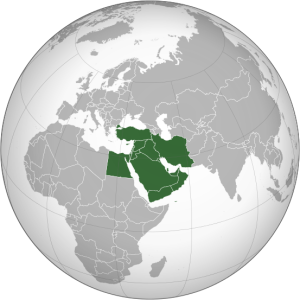 Cold and snow in the Middle East, beginning around December 10 and lasting into the weekend. Map via Wikimedia Commons.

A rare winter storm struck the Middle East beginning around Tuesday, December 10 and lasting into that weekend – producing heavy snow in areas that typically never see the white stuff. Jerusalem recorded an impressive 15-20 inches of snow, according to The Telegraph, with roads still blocked on Saturday, December 14. It was the most snow ever recorded in that region in the month of December for at least 60 years. Behind the surge of wintry precipitation, cold temperatures were widespread across the Middle East during the week of December 9-15, 2013. Snow and cold temperatures created difficult conditions particularly across Syria, where refugees had to embrace the extreme conditions outside.

The storm affected parts of Israel, Jordan, Lebanon, Northern Syria, Iran, Turkey, Egypt and the Palestinian territories, while bringing torrential rains and serious flooding to low-lying areas. Where cold air wasn’t present, heavy rains resulted in flooding across the dry river beds around the Dead Sea. Meanwhile, Cairo had a once-in-a-lifetime snowfall, the first recorded snow to fall in that city in over 100 years.

Snow in Jerusalem on December 13, 2013 by Miriam Mezzera on Flickr. Click here for more details on this photo. 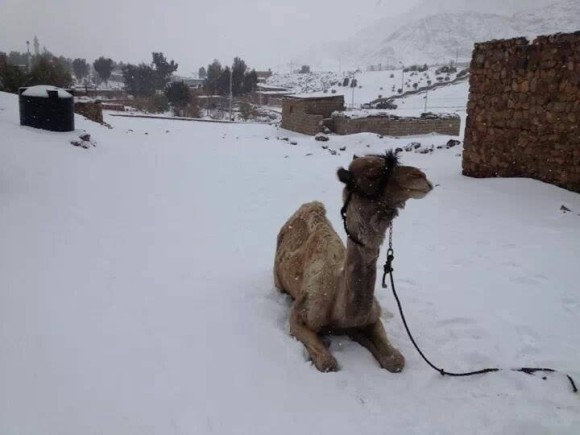 Camel in the snow in Sinai, Egypt on December 13, 2013. Image via Saleh Mousa

In Gaza City, officials declared a state of emergency due to flooding and power outages. According to USA Today, nearly 2,000 people evacuated and 100 people were injured in Gaza. With thousands of refugees in and around Lebanon, the winter conditions created major problems as they had to endure more hardships with the addition of cold temperatures and snow. Areas such as the Baka neighborhood of Jerusalem received heavy snow and experienced downed trees and power lines.

Bottom line: A strong weather system pushed into the Middle East beginning around December 10, producing snow and sending temperatures plunging downward. By the end of the week (around December 13), Jerusalem was at a standstill as heavy snow blasted the city. Cairo, Egypt recorded measurable snow for the first time in over 100 years. 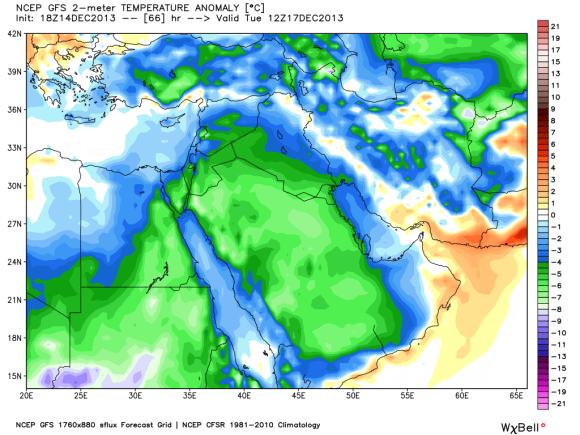 Temperature anomalies for Monday across the Middle East. It simply shows the temperature departures from normal. The green colors represent temperatures 5-10 degrees below average. Image via Weatherbell

Snow on Jaffa Road on December 13, 2013, one of the longest and oldest major streets in Jerusalem. Photo via Flickr user Miriam Mezzera. Click here for more details on this photo.

Snow in Jerusalem. Flickr user Miriam Mezzera took this photo on December 12, 2013. Click here for more details on this photo.