Widespread winter storm conditions in northeastern U.S. New York not affected as strongly as expected, but strong effects farther north in Boston. Both cities come to a standstill. 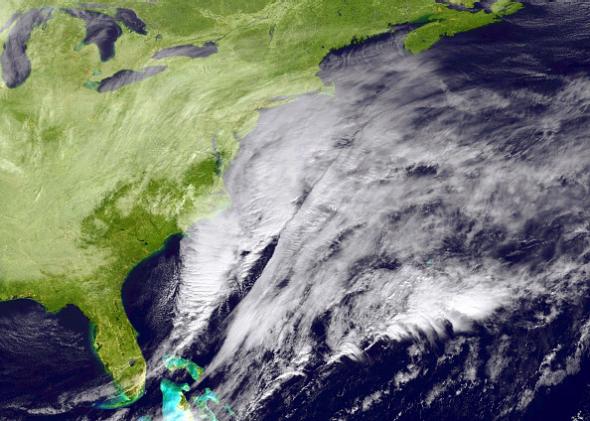 UPDATE JANUARY 27, 2015, 6 A.M. EST (1100 UTC): The storm expected to pound the U.S. Northeast has not affected New York City as much as expected, although NYC streets were virtually deserted as dawn broke on Tuesday, with drivers ordered to stay off the roads, subways shut down and bridges and tunnels closed. Meanwhile, farther north, Massachusetts was hit particularly hard by the storm, which left more than a foot of snow on parts of the state and is expected to leave one to two feet more before the storm is through. A hurricane-force wind warning continues near Boston, and, according to Eric Holthaus at Slate, the National Weather Service in Boston says this storm may be strong enough to alter the Massachusetts coastline permanently, with “one or more new inlets” possibly forming on barrier beaches, boosted by about three feet of storm surge and 20-foot waves. The storm seemed to gather in intensity last night as it struck the U.S. East Coast. Thousands of flights were grounded and travel bans were put in place. States of emergency were declared in New York, New Jersey, Connecticut, and Massachusetts. At this writing, driving bans are still in effect across New York City, New Jersey and Connecticut. Subway and bus service is still suspended in many places.

Follow the New York Times’ coverage of the storm

Track the storm’s progress on radar via Accuweather

THE NATIONAL WEATHER SERVICE IN NEW YORK HAS ISSUED A WINTER
STORM WARNING…WHICH IS IN EFFECT UNTIL MIDNIGHT EST TONIGHT.
THE BLIZZARD WARNING HAS BEEN CANCELLED.

* VISIBILITIES…ONE QUARTER TO ONE HALF MILE AT TIMES.

* IMPACTS…DANGEROUS TRAVEL CONDITIONS CONTINUE DUE TO
SNOW…BLOWING SNOW AND GUSTY WINDS. SOME ROADS MAY BE
IMPASSABLE. STRONG WINDS MAY DOWN POWER LINES AND TREE LIMBS. 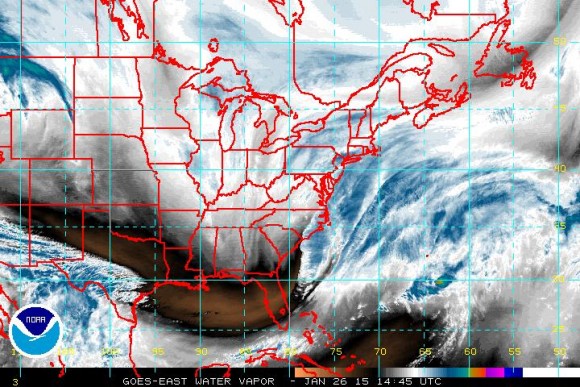 A big Nor’easter is poised to form and produce widespread blizzard conditions across the northeastern U.S. including the cities of New York City and Boston. An area of low pressure will emerge over the Western Atlantic and rapidly intensify as it pushes off to the northeast. One to two feet of snow is possible with some spots possibly picking up to nearly three feet by the time the storms pushes out of the area on Wednesday morning, January 28, 2015. Traveling conditions will be near to zero by Tuesday, January 27, as conditions deteriorate. The combination of sustained winds of 30 to 50 miles per hour (mph) and gusts near hurricane strength (74 mph) will be possible creating near zero visibility. According to some local National Weather Service offices, this storm could “cripple” several spots and could become “historic.”

This storm is a long-duration event and will pick up Monday evening. Snowfall totals could add up to two to four inches per hour Monday night. The storm will then continue throughout the day on Tuesday. The storm should taper off Wednesday morning.

Nearly 20 million people along the U.S. Northeast coast are in blizzard Warnings. A blizzard warning means severe winter weather conditions are expected or occurring. Falling and blowing snow with strong winds will create poor visibilities that will eventually lead to whiteout conditions. New York City, Boston, and up to Portland, Maine are all included in the blizzard warning that goes into effect on the afternoon of Monday, January 26 and will continue through Tuesday.

Meanwhile, over 10 million people are under winter storm warnings.

Local National Weather Service offices are warning the public that this is a high impact event that could break records in big cities like New York City and Boston. 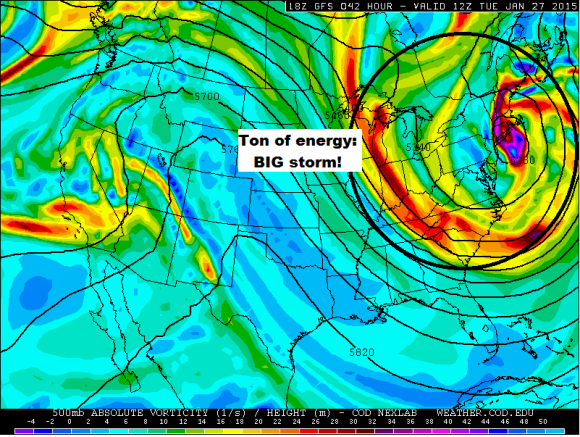 Huge energy associated with this storm. Severe weather all along the northeastern U.S. on Tuesday. Image via COD Weather 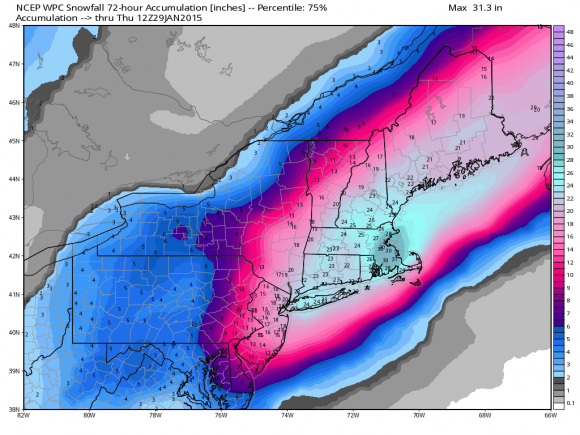 A HISTORIC WINTER STORM WILL AFFECT THE REGION TONIGHT INTO TUESDAY NIGHT…TRAVEL MAY BECOME IMPOSSIBLE AND LIFE THREATENING. SEVERE BEACH EROSION IS LIKELY IN A FEW SPOTS GIVEN THE ELEVATED WATER LEVELS…WAVE RUNUP AND STRONG WAVE ACTION. THIS IS A STORM THAT COULD PRODUCE ONE OR MORE NEW INLETS ALONG EXPOSED EAST AND NORTHEAST FACING BARRIER BEACHES.

Impacts. Many are focusing on how much snow will fall and ignoring the other actual potential impacts which include:

Road travel. The combination of sustained winds of 30 to 50 mph and gusts near 70 mph plus heavy snow will create visibilities near zero. Traveling will not be advised. Those who ignore the warming and do go out on the roads face a strong possibility of being trapped.

Air travel. Over 4,000 flights have already been canceled ahead of this storm, and this storm will create major travel problems for people around the globe as major airports like LaGaurdia or JFK will be significantly impacted.

Possible coastal flooding. Flooding may even be likely as heavy surf crashes against the shore with the development of 40 to 60 mph winds.

Power outages. These are very likely. New York City could see up to one to two feet of snow through Wednesday morning. However, higher totals are more likely as you head north and east of the city. A few spots in the Northeast could pick up to three feet of snow. Areas along the coast will likely get a bigger hit with snowfall totals and wind gusts. Trees could fall down from the gusty winds inland, and power outages will be widespread. For many spots, it could take days before power is restored. 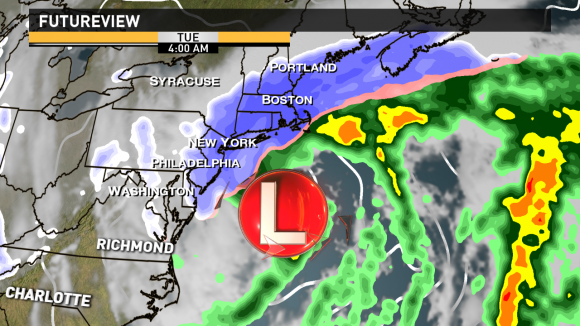 What needs to happen. At this point, you should be finalizing your preparations for this storm:

Access to information. Make sure all of your electronics are fully charged. A NOAA weather radio is always helpful.

First aid, warmth, food. Make sure you have a first aid kit and ways to keep warm as power could easily go out. You will need to make sure you have enough food for your family and your pets for the next several days.

Trees. If you live in an area with several trees nearby, it might be best to move to the opposite end of your house away from where the trees could fall.

If you do go out, and we don’t advise that you do. But if you must be out on the roads, be sure you bring blankets, food, and a first aid kit. 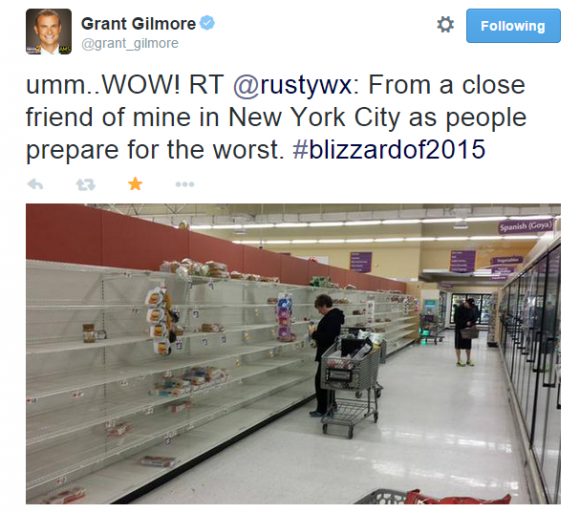 People are taking this storm seriously in the Northeast.

Bottom line: The Nor’Easter will bring blizzard conditions across a good bit of the U.S. Northeast starting tonight (January 26, 2015) and continuing through early Wednesday morning (January 28, 2015). One to two feet of snow is possible with sustained winds of 30 to 50 mph with gusts near 70 mph. Some isolated spots could see up to three feet of snow by the time the storm ends. Coastal flooding will likely occur, and power outages are expected.