At least five people killed and 1 million evacuated, after a powerful 8.3-magnitude earthquake off the coast of Chile last night. Tsunami waves and many strong aftershocks followed. Tsunami advisory for California and Hawaii. 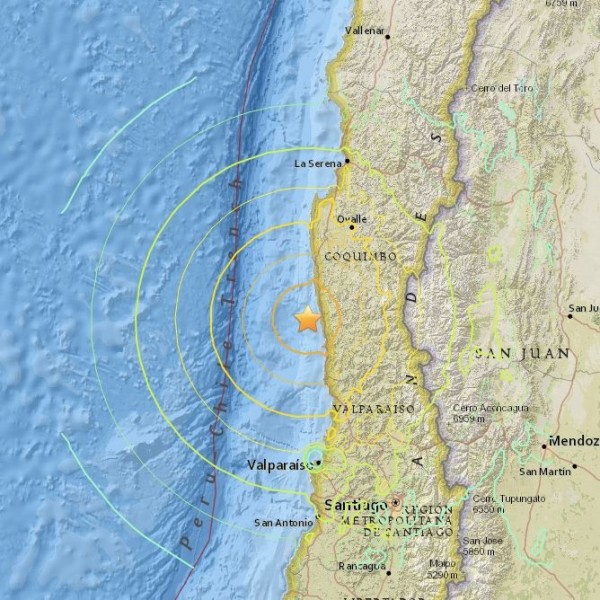 The U.S. Geological Survey (USGS) has reported a series of earthquakes and aftershocks along the coast of Chile, beginning last night (September 16, 2015) with an 8.3-magnitude earthquake, an extremely powerful earthquake. The first quake occurred at 22:54 UTC (7:54 p.m. local time in Chile, or 5:45 p.m. Central Daylight Time). Moderate tsunami waves – the highest measuring 15 feet in height (about 4.5 meters) at Coquimbo, Chile – subsequently struck Chile’s coast, and the National Tsunami Warning Center has tsunami advisories now in effect for Hawaii and the coast of California. The Associated Press reported the following:

… the effects from the tsunami would arrive in Hawaii about 6 a.m. (PDT) Thursday.

A similar advisory was issued for southern and central California. That advisory affects about 300 miles [500 km] of coastline stretching from the southern end of Orange County to most of San Luis Obispo County on the central coast. The possible changes associated with the advisory are expected to hit first in the south at about 4:45 a.m. (PDT) Thursday and move north in the minutes that follow. 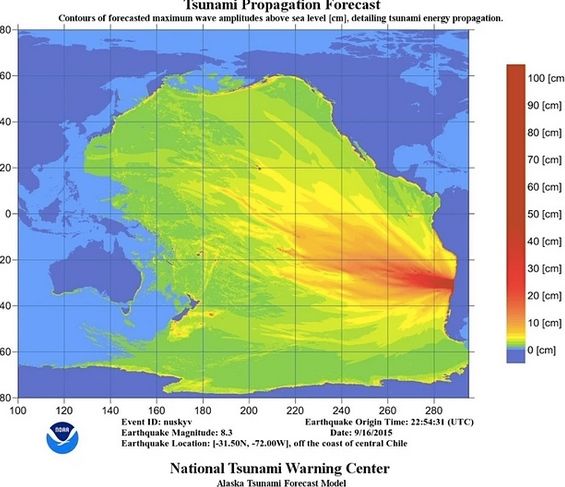 The National Tsunami Warning Center produced this graphic showing how earthquake energy might spread across the Pacific, with predicted tsumani waves heights above sea level.

It’s an advisory, not a warning for California and Hawaii, and “widespread inundation of land is not expected” for these advisory areas, according to the National Tsunami Warning Center. Forecasters do, however, expect possibly dangerous ocean currents and waves for several hours.

According to CNN, at least five people were killed and 1 million evacuated from affected areas, after the powerful 8.3-magnitude earthquake. Following the earthquake, the tsunami waves struck, causing flooding.

The 8.3-magnitude quake was followed by many strong aftershocks along Chile’s coast (see chart below). Although the September 16 quake, was particularly strong, earthquakes are common and expected along the coast of Chile. USGS explained:

The September 16, 2015 M 8.3 earthquake west of Illapel, Chile, occurred as the result of thrust faulting on the interface between the Nazca and South America plates in central Chile. At the latitude of this event, the Nazca plate is moving towards the east-northeast at a velocity of 74 mm/yr with respect to South America, and begins its subduction beneath the continent at the Peru-Chile Trench, 85 km to the west of the September 16 earthquake. The size, location, depth and mechanism of this event are all consistent with its occurrence on the megathrust interface in this region. 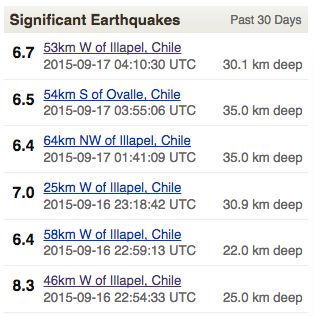 Bottom line: On September 16, 2015, an 8.3-magnitude earthquake struck off the coast of Chile. Small-scale tsunami waves (one up to 10 feet, or about 3 meters in height), and a tsunami warning was still in effect for Hawaii Wednesday evening.