Potential for a dangerous tornado outbreak in US Central Plains

Long-track, violent tornadoes appear likely in the U.S. Central Plains on Saturday, April 14, 2012. If you live there, be prepared for today’s potential outbreak.

UPDATE APRIL 14, 2012 14:22 UTC (09:22 CDT) Three possible tornados were reported in central Oklahoma in the past 24 hours. In Norman, homeowners are cleaning up debris after a possible twister touched down Friday, April 13. Yesterday, for only the second time in U.S. history, the Storm Prediction Center (SPC) issued a very rare, high risk warning more than 24-hours in advance yesterday of possible storms across the U.S. Great Plains, particularly the areas of Oklahoma, Kansas and Nebraska. The highest risk is for today – Saturday, April 14, 2012. The Storm Prediction Center did this only one other time, in April 2006. After that 2006 warning, more than 100 tornados touched down across the southeastern U.S.

This possible tornado activity stems from a very robust and strong storm system in the western United States that has been pushing eastward yesterday and today to produce a possible tornado outbreak across the Great Plains. Long-track, violent tornadoes appear likely in this region and everyone in these areas should be preparing today for today’s potential outbreak.

APRIL 13, 2012 Take a look at the Saturday, April 14 outlook released by the Storm Prediction Center:

In the outlook, SPC issued a high risk to see severe thunderstorms for the cities of Oklahoma State and Wichita, Kansas. The moderate risk extends into the cities as far south to Wichita Falls, Texas to points northward across Omaha and Lincoln, Nebraska. The standard slight risk area includes the cities of Des Moines, Kansas City, Tulsa, and Abilene. The probabilities outlook is extremely high: a 60% hatched in the high risk areas. What does this mean? It means there is a 60% probability of severe weather within 25 miles of a point. A hatched area indicates a 10% or greater probability of significant severe weather within 25 miles of a point. 60% probability is the highest percentage that can be given on a Day 2 Outlook from the SPC. To give you perspective, a high risk was never issued on April 26, 2011, the day before the devastating tornado outbreak that occurred across the southeast. 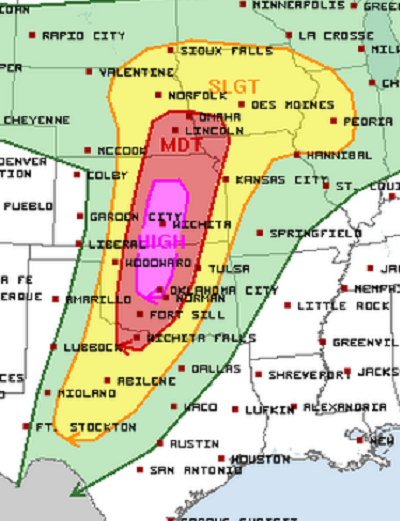 A closer look at the cities in the risk areas for Saturday, April 14, 2012. Image Credit: SPC

The wording from the Storm Prediction Center is very strong, and all residents that live in this area should be prepared for this possible event:

AFTER COLLABORATION WITH WFOS WICHITA…NORMAN…TOPEKA…TULSA AND DODGE CITY…A HIGH RISK WILL BE ISSUED DUE TO THE POTENTIAL FOR A HIGH-END LIFE THREATENING EVENT ACROSS THE SRN AND CNTRL PLAINS.

With this event, all modes of severe weather is possible including damaging winds over 60 miles per hour, large hail around two inches, and large, violent, long-tracked tornadoes. The best times for this event to occur will be Saturday evening into Sunday morning. What makes this event really dangerous is that a majority of the outbreak could occur during the overnight hours. Statistically, casualties increase during overnight severe weather outbreaks. Because of the nature of this system, the Storm Prediction Center and the local offices at the National Weather Services thought it would be best to make Saturday a high risk day so the general public can be ready and prepared for significant severe weather.

There are many events that are occurring during the day on Saturday, including spring football scrimmages at various colleges in these areas. I strongly urge all residents to monitor the weather. To give you a perspective of the storm that will affect these areas, we have to look at parts of California this morning. The same storm system is affecting the coast of California and producing relatively strong storms for this area. Frequent lightning has occurred off the central coast of California and even a severe thunderstorm warning was issued. Whenever systems this strong affects the west coast, it can sometimes hint at what is to come for the Central Plains.

The same storm system that is affecting parts of California will be responsible for the potential severe weather outbreak on April 14, 2012 across the Central Plains. Image Credit: NWS

Here are the players on the field:

A strong area of low pressure is expected to develop and push to the northeast. It will increase the shear in the atmosphere and overall environment and will enhance the tornado threat. Secondly, a dry line is expected to form. A dry line, which is typically seen in the Central Plains, separates very dry air from the west and moist, humid air to the east. A dry line can act as a lifting mechanism that can fire up thunderstorms along the boundary. Thirdly, temperatures and humidity will be high, which means instability will be high too. CAPE, or convective available potential energy, measures the instability in the atmosphere. When you reach CAPE levels over 2,000 Joules per kilogram, instability is high. The higher the instability, the more fuel thunderstorms can receive. With these three main players on the board, severe weather does appear likely. Also, helicity levels are extremely high in this high risk area, with possible forecast values exceeding over 400 m2/s2. When helicity levels are this high, strong tornadoes are possible. The significant tornado parameter, or STP, is an index that combines instability, wind shear, and other key ingredients that shows us the places most likely to see tornadoes. Values (range from 0-10) over one are considered to be significant. Looking over the 0z NAM model STP values, I am seeing maxed out values of ten across OKlahoma, Kansas, and Nebraska.

Will this forecast verify?

It is possible that this event could become weaker and could become a bust. If a capping inversion takes places, it could completely prevent storms from developing in some areas. There have been many times in the past where dynamics were practically perfect for severe thunderstorm development, but the capping inversion, or when warm air is above a region of cold air which in turn, stabilizes the atmosphere. I was actually surprised to see a high risk posted today. Typically, the SPC looks at the current weather conditions the morning of the event to access whether or not they need to upgrade a risk area. Storms the day before could change the environment and create a stable atmosphere. It is these small parameters on the smaller scale, or mesoscale, that meteorologists will definitely have to pay close attention to come Saturday morning. I refuse to compare tornado outbreaks with other outbreaks because every storm system is different. However, it is very important for everyone to be prepared and ready for a significant severe weather outbreak Saturday and even on Sunday for points east.

If you live in any of these areas, please have a plan ready. If you live in a mobile home or in a house that does not have a basement, you might want to reconsider going somewhere else Saturday evening that has a better shelter. If you do not own a NOAA Weather Radio, I strongly urge you to purchase one today. For more information regarding tornado safety and preparedness, please check out our post below.

Bottom line: The Storm Prediction Center has issued an extremely rare high risk for severe weather across Oklahoma and Kansas for Saturday, April 14, 2012. Large, violent, and long-tracked tornadoes are possible as the atmosphere will be primed and conducive for severe weather. This high risk was issued so people in these regions can understand the seriousness of this threat and be able to prepare now instead of later. The event will likely occur during the nighttime hours, which makes this threat even more dangerous. I am hoping this event is not as major as the models and SPC are indicating. There are still many variables on the table that are not answered, so the forecast could change tomorrow. The overall idea is to be ready!