Photos and videos from the devastating storms killed at least a dozen people, and possibly many times that number, in the U.S. Central Plains and Southeast in recent days.

A multi-day severe weather event in the U.S. Central Plains and Southeast has brought high winds, hail, flooding and tornadoes to a large portion of the U.S. over the past several days. There are conflicting reports on the number of deaths from this system so far. Some media sources are reporting “over a dozen” killed, while others report the number of deaths to be up to 35. Flash flooding warnings and tornado forecasts are continuing into Wednesday, April 30. Below is a collection of videos and photos from the recent severe weather.

This is Scott Peake’s close-up intercept of the strong-violent Louisville, Mississippi tornado on April 28, 2014.

The video above shows intercepted dual wedge tornadoes southwest of Columbus, Mississippi on April 28, 2014. Posted to YouTube by David Drummond. 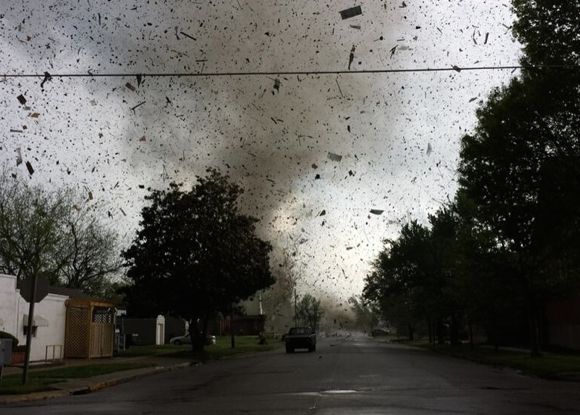 April 27, 2014 tornado in Baxter Springs, Kansas, where at least 25 people were injured. Photo via @41ActionNews. 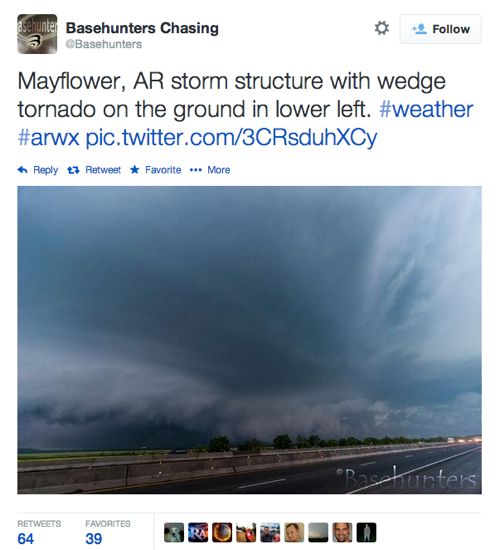 The video above shows aerial footage of Tornado damage that took place on April 28, 2014 in Bessemer, Alabama just west of Birmingham, AL. The tornado hit a golf course and an apartment complex, with a near miss of the Hospital located in Bessemer.

In the video above, a television meteorologist at WTVA TV in Tupelo, Mississippi evacuates due to approaching tornado on April 28, 2014. 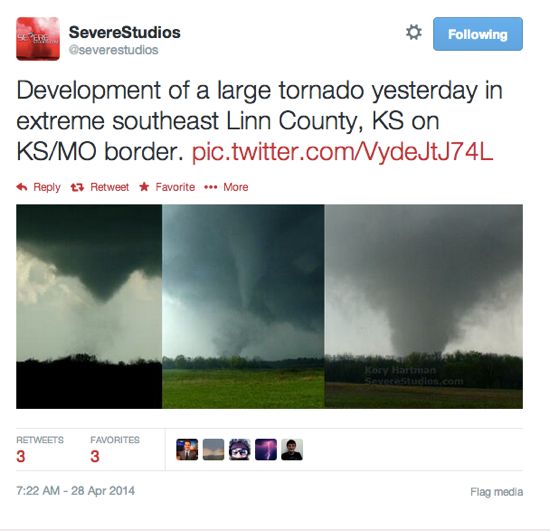 The animation above is from NOAA’s GOES-East satellite data. It shows the development and movement of the weather system that spawned tornadoes affecting seven central and southern U.S. states on April 27-28, 2014. Credit: NASA/NOAA GOES Project.

The video above is from Mayflower, Arkansas. Jordan Hamilton and Tyler Costantini captured the devastation in Mayflower on video, right after a tornado struck.

Bottom line: A collection of videos and photos from the recent severe weather in the U.S. Central Plains and Southeast, April 27-29, 2014.