What does this year’s odd U.S. weather have in common with a huge spike in hungry, stranded sea lion pups on California shores? Both are linked to a giant patch of warm ocean water. 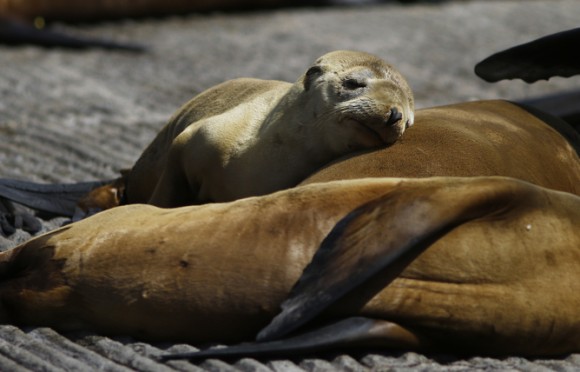 A pup lies with older sea lions at the Coast Guard Pier in Monterey, California March 17, 2015. Animal rescue centers in California are being inundated with stranded, starving sea lion pups, raising the possibility that the facilities could soon be overwhelmed, the federal agency coordinating the rescue said. Photo credit: Reuters/Michael Fiala

By Nicholas A Bond, University of Washington

People living across the US have lived through some odd weather in the past year. It’s been unusually warm and dry in the western US, while the East had a very cold and snowy winter. Meanwhile, scientists have been seeing Pacific marine species in places they’re not normally found and a huge spike in hungry, stranded sea lion pups on California shores.

All these phenomena are linked to a giant patch of remarkably warm water off the West Coast in the northeast Pacific Ocean called “the blob,” a term I coined when we first started to notice it during the fall of 2013 and winter of 2014.

This piece summarizes the mechanisms responsible for the blob, enumerates some of its direct and indirect impacts, and discusses the opportunity provided by this climate event.

Better understanding the blob is important not only to predicting weather and its impact on ecosystems but also because it can provide insight into the effects we could see from warmer ocean waters in the future.

The development of the blob of unusually warm water can be attributed largely to an unusual weather pattern that set up shop over a large region extending from the North Pacific Ocean across North America from October 2013 into February 2014.

This pattern featured a strong and long-lasting weather pattern with higher-than-normal pressure – called a ridge – over the ocean centered offshore of the Pacific Northwest. This ridge of high pressure reduced the number and intensity of storms making landfall, leading to reduced precipitation west of the Continental Divide compared to seasonal norms.

The ridge also had profound effects on the weather farther east. Specifically, it often acted to divert cold, Canadian air into the middle and eastern sections of the US, with the Great Lakes region being hit especially hard. 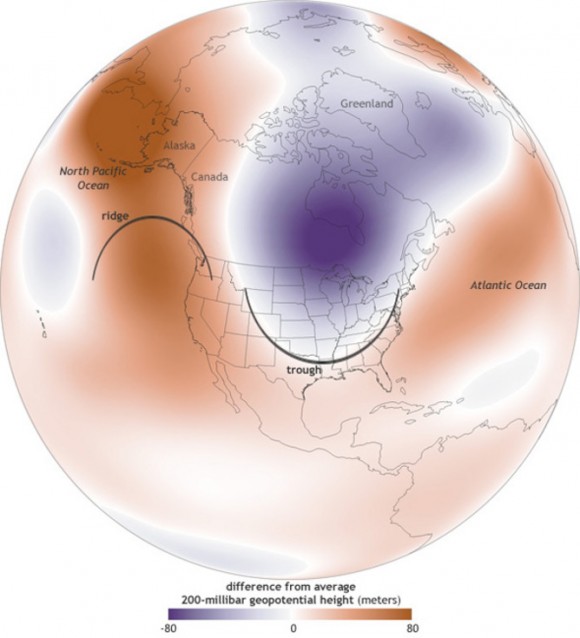 The unusually dry conditions in the western US and the frigid weather farther east definitely got the attention of the climate community. But what happened in the ocean off the Pacific Northwest was extreme in its own right.

The sea surface temperature anomalies – or differences from average temperatures – became greater than 2 Celsius (3.6 Fahrenheit) by late winter. That may not seem very impressive, but for the region it’s actually without precedent in the historical record.

Moreover, the quasi-circular nature of the patch of warm water anomalies (and the reason for its name) had also not been seen before. This motivated investigation of the source(s) of all the extra heat.

In a study published earlier this month, my colleagues and I fingered the stubborn high-pressure ridge mentioned above, and in particular the weak winds associated with it. The result was a lower-than-normal rate in how quickly heat is transferred from the ocean to the atmosphere, and slower movement of cooler water into the formation region of the blob.

In other words, the unusual atmospheric conditions produced less cooling than typical for the season from fall 2013 through much of the following winter, yielding the sea surface temperature anomaly pattern. So we can essentially blame the ridge for the blob, but what caused the ridge in the first place?

Two independent lines of inquiry, including a study last year led by Richard Seager and one from March led by Dennis Hartmann, indicate that the unusual atmospheric circulation over the North Pacific and North America could be attributed at least in part to happenings in the far western tropical Pacific.

A large expanse of ocean here has been warmer than normal for a few years and has been accompanied by vigorous clusters of thunderstorms. This activity appears to have systematic effects on the large-scale atmospheric circulation, in a manner similar to that associated with the El Niño-Southern Oscillation (ENSO) phenomenon, a pattern of naturally occurring fluctuations in Pacific Ocean temperatures. But in this case, the roots are farther west, in the vicinity of New Guinea. 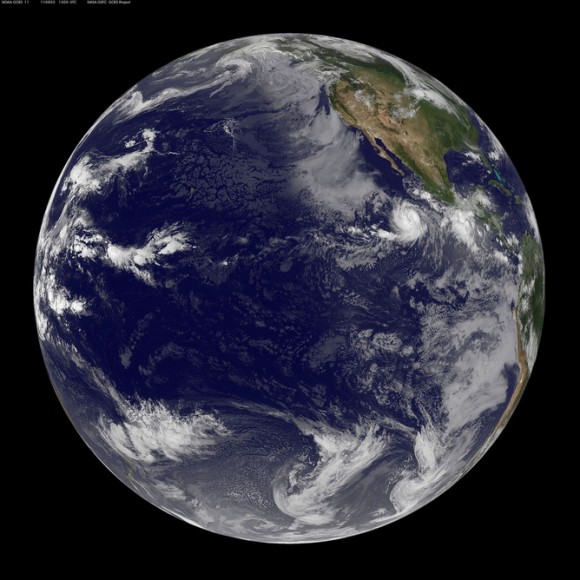 Previous work had suggested that this portion of the tropical Pacific could have systematic effects on higher latitudes, including the ridge of high pressure producing the blob. But the work by Seager et al and Hartmann represents an important advance in our understanding of this linkage.

A vast amount of extra heat is associated with ocean temperature anomalies of the sort shown in the image below. But while these anomalies tend to be persistent, they are not static. 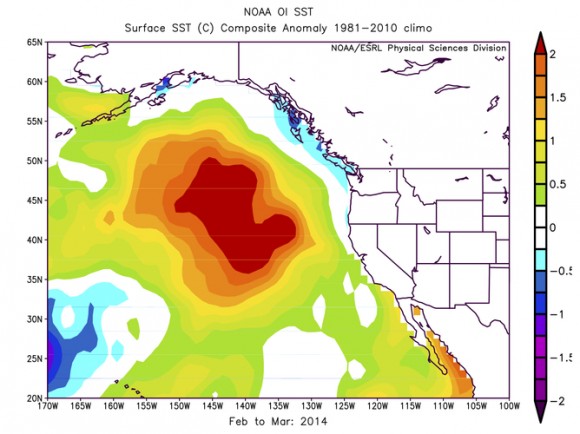 The ocean circulation – that is, the currents – and the weather during the past year, which was unusual in its own right, combined to cause the blob to evolve into a wide strip of relatively warm water along the entire West Coast of North America (see image, below). 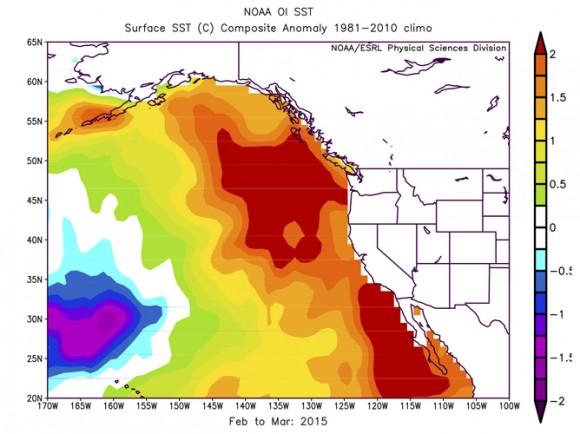 This happens to be a pattern that has occurred before in association with decades-long shifts in ocean temperature known as the Pacific Decadal Oscillation (PDO). Previous expressions of the PDO have had major and wide-ranging impacts on the marine ecosystem including salmon and other species of fish; recent developments are receiving a great deal of attention from fishery-oceanographers along the West Coast.

An extreme event such as the blob represents a special opportunity to determine how the ocean’s biochemical properties respond to changes in the physical environment.

Following up on that idea, the lessons learned from the present case have implications from a climate change perspective.

It bears emphasizing that the development and evolution of the blob is an example of a naturally occurring, short-term perturbation in the atmosphere and ocean climate of the North Pacific.

Nevertheless, the oceans are warming, and conditions akin to those of the last couple of years are liable to become more common in future decades, albeit for different reasons.

We hope to use what nature has provided us recently with the blob. By studying its effects, such as changes to marine ecosystems or coastal forests, we can learn how sensitive, or resilient, these natural systems are to a warming world.

Nicholas A Bond is Research Meteorologist at University of Washington.