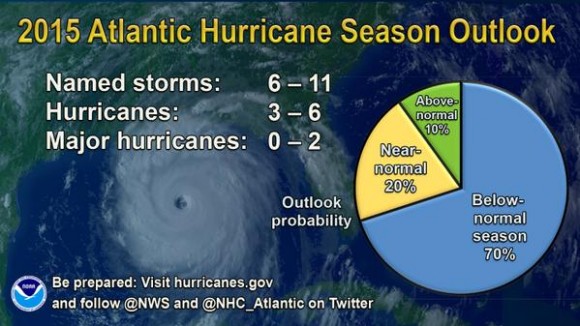 With the developing El Niño in the Pacific Ocean, NOAA announced on May 27, 2015 that it is forecasting a below-average 2015 Atlantic hurricane season. That season runs each year from June 1 to November 30. While NOAA scientists are forecasting fewer named storms this year than in some previous years, it is important to note that it only takes one storm to make it a bad season for any given location.

The developing El Niño in the equatorial Pacific Ocean is primarily driving this forecast. The Climatic Prediction Center is forecasting a 90% chance of El Niño continuing through the Northern Hemisphere summer of 2015. In addition, these scientists are forecasting an 80% chance El Niño will continue for the rest of 2015. While El Niño can influence rainy and dry seasons across the globe, it can also have a positive effect in some regions. One of those positive effects can typically be seen in the Atlantic Ocean during the hurricane season.

An El Nino is developing across the Pacific. Image via CPC/NOAA

Typically, in El Niño seasons, wind shear increases in the Atlantic. For tropical systems to develop, they need light wind shear and warm sea surface temperatures. Think of a lighted candle; if there’s too much wind blowing around, the flame on the candle will go out.

Likewise, tropical weather systems are vulnerable to a change in the wind. If there’s too much wind knocking the system around, it can’t organize and develop into a full-blown hurricane.

Also, as I mentioned above, hurricanes need warm ocean temperatures, and sea surface temps have been slightly below average across the Atlantic this year.

Back in April, 2015, Colorado State’s tropical weather experts Dr. Philip Klotzbach and Dr. William Gray forecast 7 named storms, 3 hurricanes, and 1 major hurricane during 2015’s Atlantic hurricane season. They will likely issue a new outlook in the next couple of days, but it will likely stay similar to their forecast back in April. 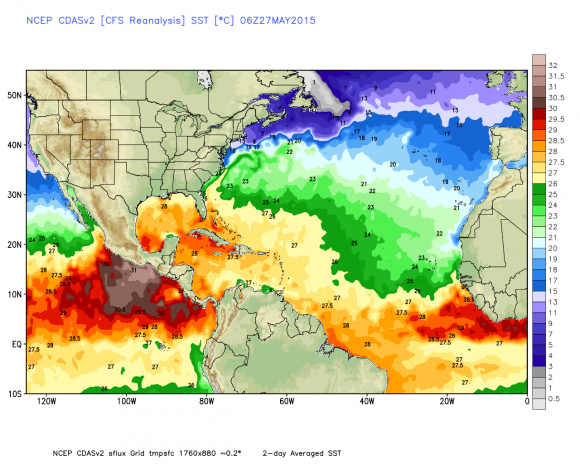 Current sea surface temperatures in the Atlantic on May 27, 2015. Image via Weatherbell

NOAA mentioned in today’s announcement that the science is getting better with forecasting tropical cyclone tracks over the past decade. Its forecast last year was for 8-13 named storms, 3-6 hurricanes, and 1-2 major hurricanes. How strong was that 2014 forecast? Pretty strong. The 2014 season was fairly slow with only eight named storms, six hurricanes, and two major hurricanes. Three storms had an impact on land in the 2014 season: Arthur (North Carolina), Fay (Bermuda), and Gonzalo (Bermuda). The slow season occurred thanks to a combination of high winds shear and sinking motion in the lower latitudes of the Atlantic Ocean where storms typically form.

That said, it isn’t the best idea to have high hopes for outlooks that forecast weather events over several months. Winter weather outlooks are usually more complicated than tropical forecasts, but both have several factors that go into the forecast including ocean temperatures, jet stream patterns, and a look at various climate indices such as ENSO, MJO, and PDO.

No matter the outcome, it is always important to be prepared. It has been nearly a decade since a major hurricane made landfall on the U.S. coast. The last storm to hit as a major hurricane was Wilma in 2005 as it hit southwest Florida as a Category 3 storm with sustained winds of 120 mph. Within ten years, populations have increased and so has the complacency. Will people take a threat seriously if a major hurricane does form and make landfall in the United States? It is always important to be prepared and have evacuation plans if you live along or near the coast. It could be a slow season, but it doesn’t mean it can’t be a memorable one. The best example typically used is the 1992 season. While the season itself had below average activity in the Atlantic, it will always be memorable as it was the year Hurricane Andrew struck southeast Florida as a Category 5 storm. 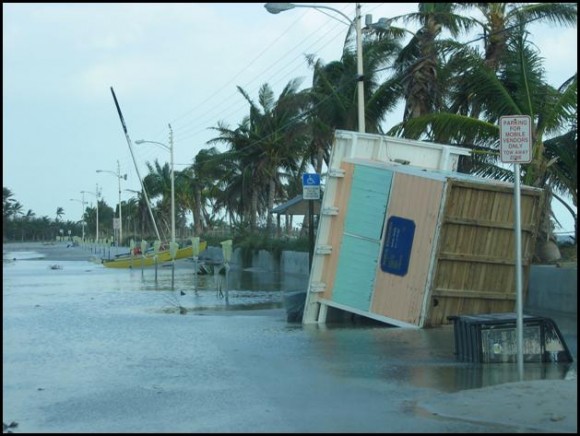 Photograph of South Roosevelt Boulevard near Smathers Beach in Key West, Florida during the late afternoon of 24 October 2005, looking toward the east from Hurricane Wilma. Image via Jim Lee

Don’t let your guard down. Even weak tropical storms can produce catastrophic damage if they sit over the same spots for several days. While people focus on the winds of a hurricane, it is usually the rain and flooding that can cause devastation and casualties. Tropical Storm Allison in 2001 killed 23 people in southeast Texas as heavy rain produced widespread flooding in parts of the Houston metro area where 35 inches fell in a five day period. In 1994, Tropical Storm Alberto produced widespread flooding in the Southeast. Nearly 10 to 20 inches fell in several spots as the storm remained stationary. The storm killed nearly 30 people and resulted in nearly a billion dollars worth of damage. 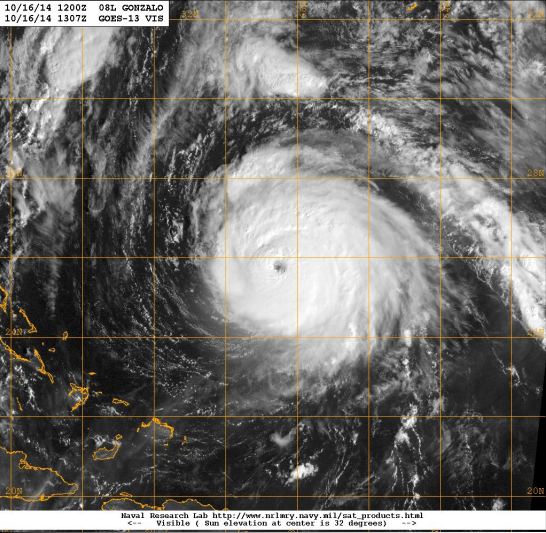 Bottom line: NOAA is forecasting a slow 2015 Atlantic hurricane season with 6-11 named storms, 3-6 hurricanes, and 0-2 major hurricanes. Just remember, it only takes one storm to make it a memorable season. It is better to be prepared than surprised.