Cinematographer Harun Mehmedinovic describes the new Skyglow Project video as an ode to the indigenous stargazers of North America.

It’s an awesome montage of skies over ancient astronomy petroglyphs – rock carvings – and archaeoastronomy structures – sites that people in the past have used to understood the phenomena in the sky – taken in U.S. National Parks in California, Arizona, Colorado, and New Mexico. It’s a glimpse, Harun said, of how the night sky might have appeared to the ancient inhabitants of those lands.

The rock carvings and structures featured in the video were created by a diverse group of tribes, from Native Hawaiians, to the Paiute people of Bishop, California, and the Ancestral Puebloans of the Southwest. Harun said:

These petroglyphs and structures reflect the long standing interest in ancient astronomy which grew stronger as many of the tribes went from the hunter-gatherer to the agrarian societal orders. From references to the sun carved in the rock, and interest in using the sun to predict seasons (entire buildings built to serve as sundials and calendars, a critical element in the farming communities) to those of 13 moons (lunar annual calendar), to carvings of stars and constellations, interest in celestial bodies is ever present across the indigenous communities of the United States.

This video, by Harun Mehmedinovic and Gavin Heffernan, was filmed as part of Skyglow Project, an ongoing crowdfunded quest to explore the effects and dangers of urban light pollution in contrast with some of the most incredible dark sky areas in North America. You can find out more about this video here. 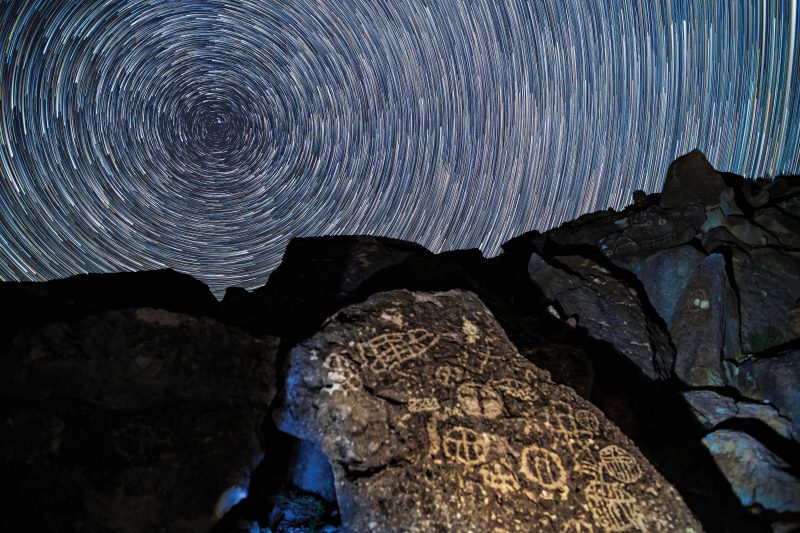 Bottom line: Video montage of skies over petroglyphs in national parks in the western United States.