The newly-discovered anthrax-devouring Tsamsa virus, found in a zebra carcass in Namibia, could lead to new ways to combat deadly anthrax bacteria.

An uncommonly large new virus that attacks the anthrax bacterium has been discovered in a zebra carcass on the plains of Namibia in southern Africa. This new virus, also know as a bacteriophage, could open new strategies towards combating anthrax, as well as related bacteria that cause food poisoning. Scientists reported their findings in the January 27, 2014 issue of the journal PLOS One.

Anthrax is best known as a bioweapon. It became a household name during the 2001 anthrax attacks in the U.S. when spores sent by mail killed five people and infected 17 others. Before the 20th century, however, anthrax (Bacillus anthracis), a naturally-occurring bacteria species, caused thousands of livestock and human deaths. Since the late 1880s, following the invention of an effective vaccine, a century of aggressive livestock vaccinations and improved sanitation has almost eradicated anthrax occurrence in livestock.

But anthrax outbreaks continue to occur occasionally in the wild. That’s because anthrax spores can survive for very long periods in soil. When a herbivore, like a zebra, ingests long-dormant anthrax spores while grazing, the bacteria reactivates and multiplies inside its host’s body, causing severe illness that usually leads to death. As the animal’s body decomposes, newly-created anthrax spores return to the soil, staying dormant until the next host animal comes along. Anthrax can also infect carnivores that feed on infected herbivores. 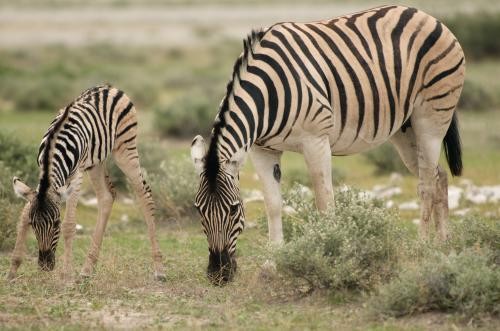 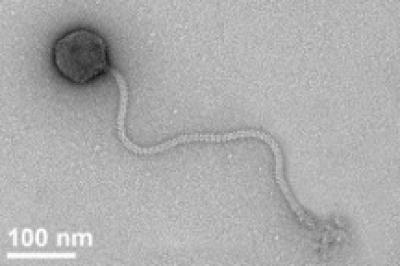 The unusually large virus, named Tsamsa, was found in the carcass of a zebra in Namibia, southern Africa. Image via Jochen Klumpp, ETH Zurich, Switzerland.

The anthrax bacteriophage, a term that means bacteria eaters, was found in samples obtained from a zebra carcass in Namibia’s Etosha National Park. Holly Ganz, lead author of the PLOS One paper, commented in a press release that the bacteriophage’s voracious appetite for anthrax was the first thing noticed by the research team studying the samples.

Named Tsamsa, this new bacteriophage has a very large head and a long tail. It also has a large genome, molecules of DNA and RNA that describe an organism’s traits. When the scientists sequenced Tsamsa’s genome, they found the gene for lysin, an enzyme that kills bacteria cells

Further research showed that Tsamsa also has an appetite for bacteria closely related to anthrax, like Bacillus cereus that’s been implicated in cases of food poisoning.

When bacterophages were first discovered in the early 1900s, there was interest in using them as antimicrobials. However, penicillin and other types of antibiotics gained favor instead. One advantage held by bacteriophages over antibiotics is that each type of bacteriophage has a preference for specific types of bacteria. Therefore, they could be used to target specific bacteria pathogens while leaving beneficial bacteria unharmed.

With growing concerns about antibiotic resistance and superbugs, people are coming back to look at phages.

You might use it to detect the anthrax Bacillus or B. cereus; use it as an alternative to antibiotics or as part of a decontaminant. 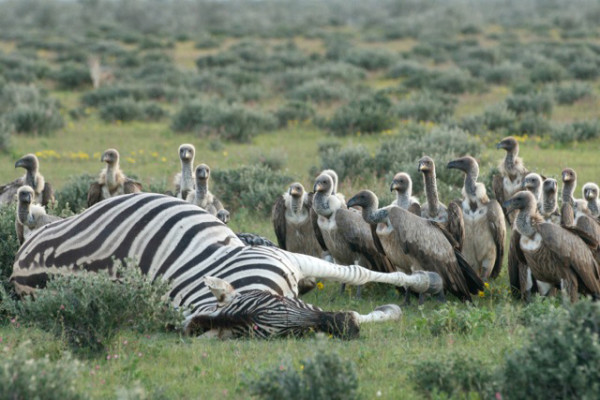 Bottom line: A large new virus that attacks anthrax bacteria has been discovered in the carcass of a zebra on the plains of Namibia in southern Africa. Named Tsamsa, this anthrax-devouring virus could open up new strategies to detect anthrax bacteria and others closely related to it, as well as treat illnesses caused by these bacteria and clean up areas contaminated by it. Scientists reported their findings in the January 27, 2014 issue of the journal PLOS One.