STEVE is a majestic sky phenomenon, similar to well-known auroras, but not as well understood. Now, a new study provides an explanation. 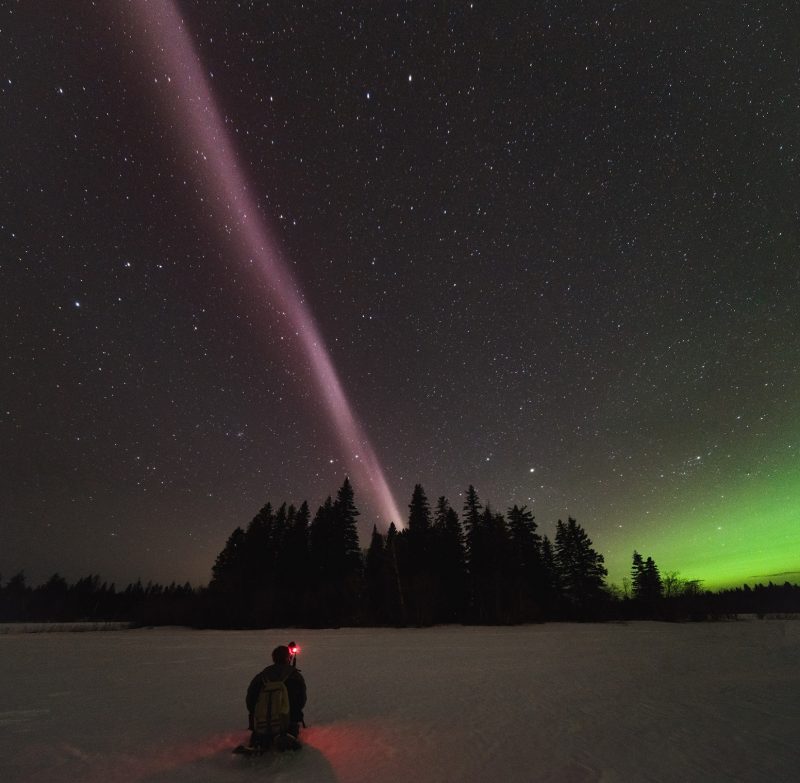 A great example of a STEVE display, taken by Ryan Sault of Alberta Aurora Chasers on the evening of April 10, 2018, in Prince George, British Columbia, Canada.

We’re all aware of, or even familiar with, the aurora borealis – also known as northern lights – those beautiful, shimmering ribbons of light that sometimes dance across the night sky. But there’s another, somewhat lesser-known phenomenon called STEVE (strong thermal emission velocity enhancement) that also puts on fantastic displays, yet isn’t as well understood. Now scientists think they have finally figured out what causes it. They found that STEVE has characteristics similar to those of typical auroras, yet is also uniquely different in how it forms.

In 2018, a previous study had found that STEVE was a kind of sky glow that was distinct from other auroras, but the researchers didn’t know what was causing it. Whatever the source was, it was seemingly not charged particles hitting Earth’s atmosphere the same way as in typical auroras. But, STEVE could also appear during strong magnetic storms, the kind that produce the brightest displays of auroras: hence, a bit of a puzzle. There were some fantastic displays of STEVE in 2018, which garnered much attention on social media, and caught the attention of researchers.

Unlike other auroras, which are seen as large, brilliant green ribbons, STEVE is a thinner ribbon of pinkish-red or mauve-colored light stretching from east to west, and extending farther south in latitude than other auroras. STEVE displays occur very high up in the atmosphere, at about 15,000 miles (25,000 km) altitude. But, those STEVE displays are also often accompanied by other vertical columns of green light called Picket Fence Auroras that also had not been well understood until now. 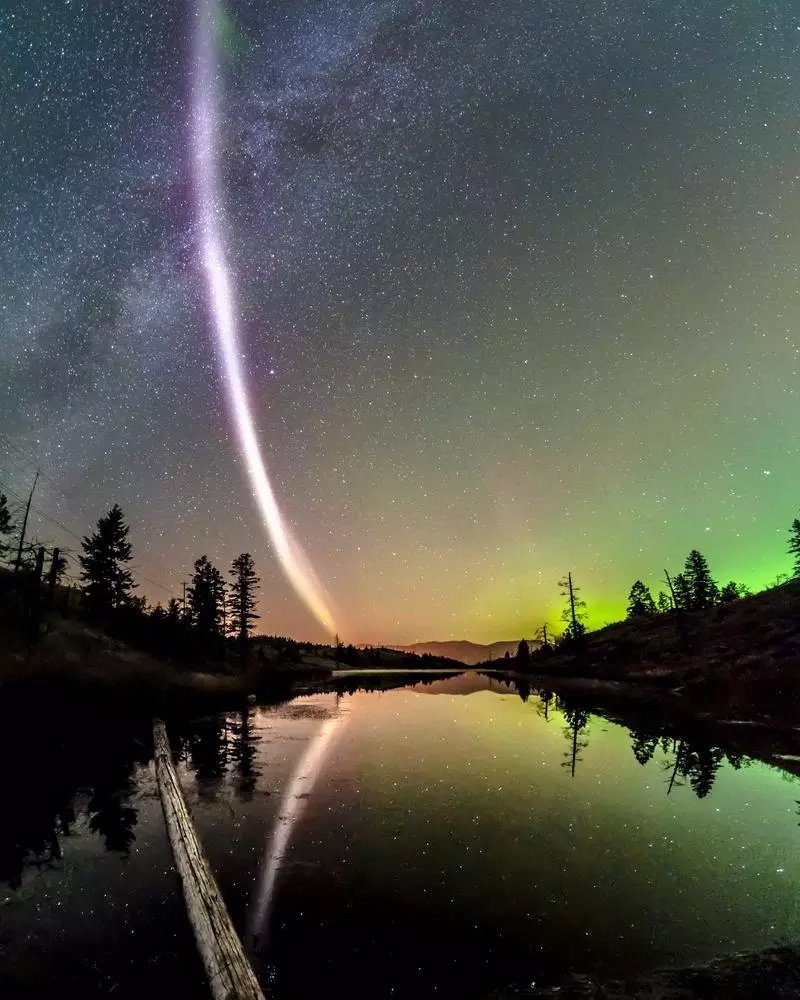 Another beautiful photo of a STEVE display, near Kamloops, BC, Canada, on September 26, 2016. Image via Dave Markel. 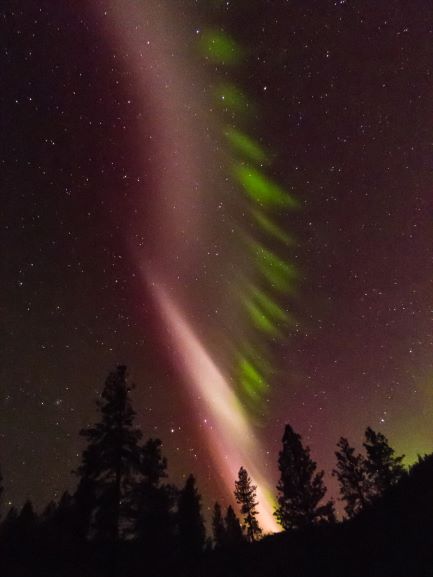 In this great photo, both a mauve STEVE and a green Picket Fence Aurora display can be seen. Photo taken on May 8, 2016 near Keller, Washington. Image via Rocky Raybell. 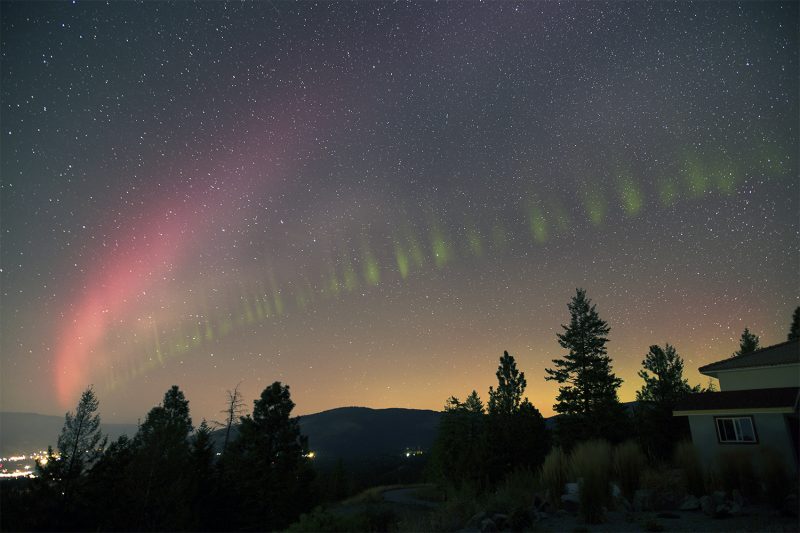 Now, the new study has pinpointed two causes of the two phenomena – energetic electrons like those in other auroras, as well as heating of other charged particles in the atmosphere – that create both STEVE and Picket Fence Auroras. STEVE is caused by the heating of charged particles – plasma heating – in the upper atmosphere, but Picket Fence Auroras result from mechanisms more similar to typical auroras. As Bea Gallardo-Lacourt, a space physicist at the University of Calgary and co-author of the new study, explained:

The researchers were able to come to these conclusions by studying both satellite data and ground images of STEVE events. Data from several satellites were analyzed as the satellites passed above STEVE events in April 2008 and May 2016. That data was then compared to photographs taken by amateur auroral photographers. In the case of the STEVE displays, it was found that charged particles in the ionosphere – in a “flowing river” – collide with each other. The friction produces heat, and the particles emit mauve-colored light as a result. This is similar to how electricity in an incandescent light bulb heats the filament until it glows. 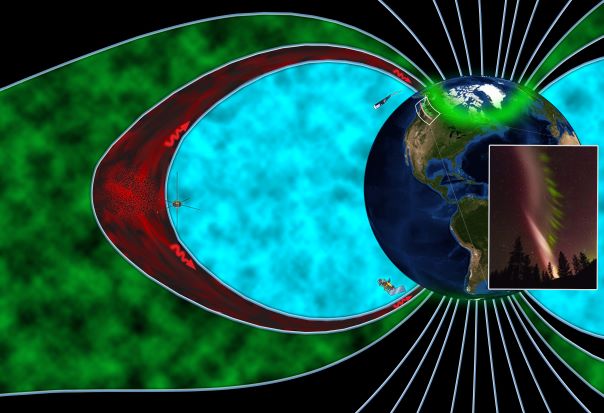 Artist’s concept of the magnetosphere during a STEVE event, depicting the plasma region which falls into the auroral zone (green), the plasmasphere (blue) and the boundary between them called the plasmapause (red). Image via Emmanuel Masongsong, UCLA/Yukitoshi Nishimura, BU and UCLA.

Picket Fence Auroras, on the other hand, are created by energetic electrons hitting the Earth’s atmosphere from space. This is similar to regular auroras at northern latitudes, except that these particles tend to strike the atmosphere farther south in latitude. The electrons are energized by high-frequency waves moving from Earth’s magnetosphere to the ionosphere; when the electrons are knocked out of the magnetosphere, they create the stripe patterns reminiscent of a picket fence. This process occurs in both hemispheres simultaneously, indicating that the source of the particles is high enough above Earth that the particles can affect both hemispheres at the same time.

STEVE events are also a great way for the public to become involved in auroral research. Photos taken from the ground can provide specific time and location data, which is valuable to scientists. As Toshi Nishimura, a space physicist at Boston University and lead author of the new study, said:

As commercial cameras become more sensitive and increased excitement about the aurora spreads via social media, citizen scientists can act as a ‘mobile sensor network,’ and we are grateful to them for giving us data to analyze. 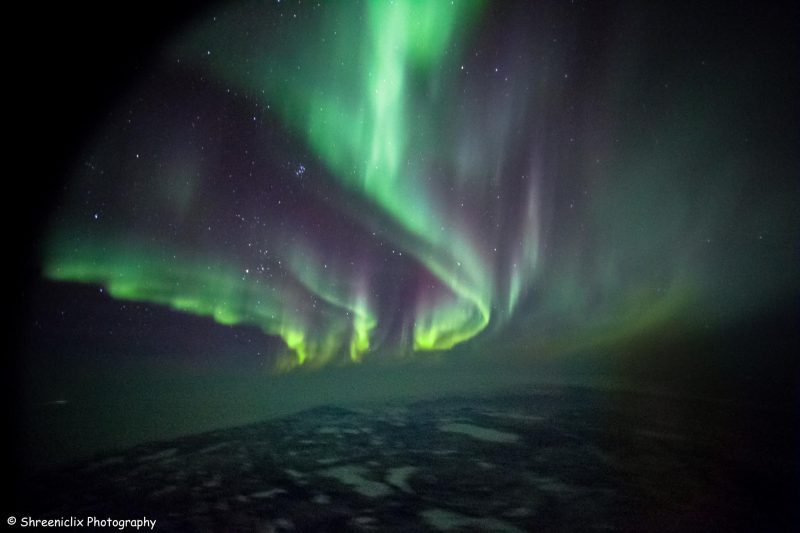 A beautiful example of a “regular” aurora, seen on November 2, 2016, from an airplane flying over northern Canada near the Arctic Circle. Image via Shreenivasan Manievannan.

Learning about exotic phenomena like STEVE and Picket Fence Auroras not only helps scientists understand what causes them, but also how they relate to other auroral phenomena, and what drives such complex processes in Earth’s atmosphere as it interacts with charged particles coming in from space. This is useful not only for understanding the phenomena themselves, but also how to safeguard against possible detrimental effects on radio and GPS signals, which are crucial services in today’s technological world.

Bottom line: Thanks to data from both the public and satellites, scientists have now figured out what causes both STEVE and Picket Fence Aurora phenomena, which are lesser-known but just as beautiful aurora-like sky displays.