A newly discovered bird-like dinosaur resembles an ostrich, with claws, a tail and crested head. It’s a feather in the cap of American paleontologists.

Paleontologists announced a new feathered dinosaur species resembling an ostrich but with a tail, sharp claws at the end of its forearms, and a crested skull in a paper published on March 19, 2014 in the journal PLOS ONE. They made he identification of this approximately 68 million year old creature from three partially complete skeletons uncovered in the U.S. Dakotas, in an area of exposed rock dating to the late Cretaceous period called the Hell Creek formation. This bird-like dinosaur, given the taxonomic name Anzu wyliei, is also nicknamed Chicken from Hell for its discovery site.

The Hell Creek formation is also notable for other North America upper Cretaceous fossils such as Tyrannosaurus rex and Triceratops. 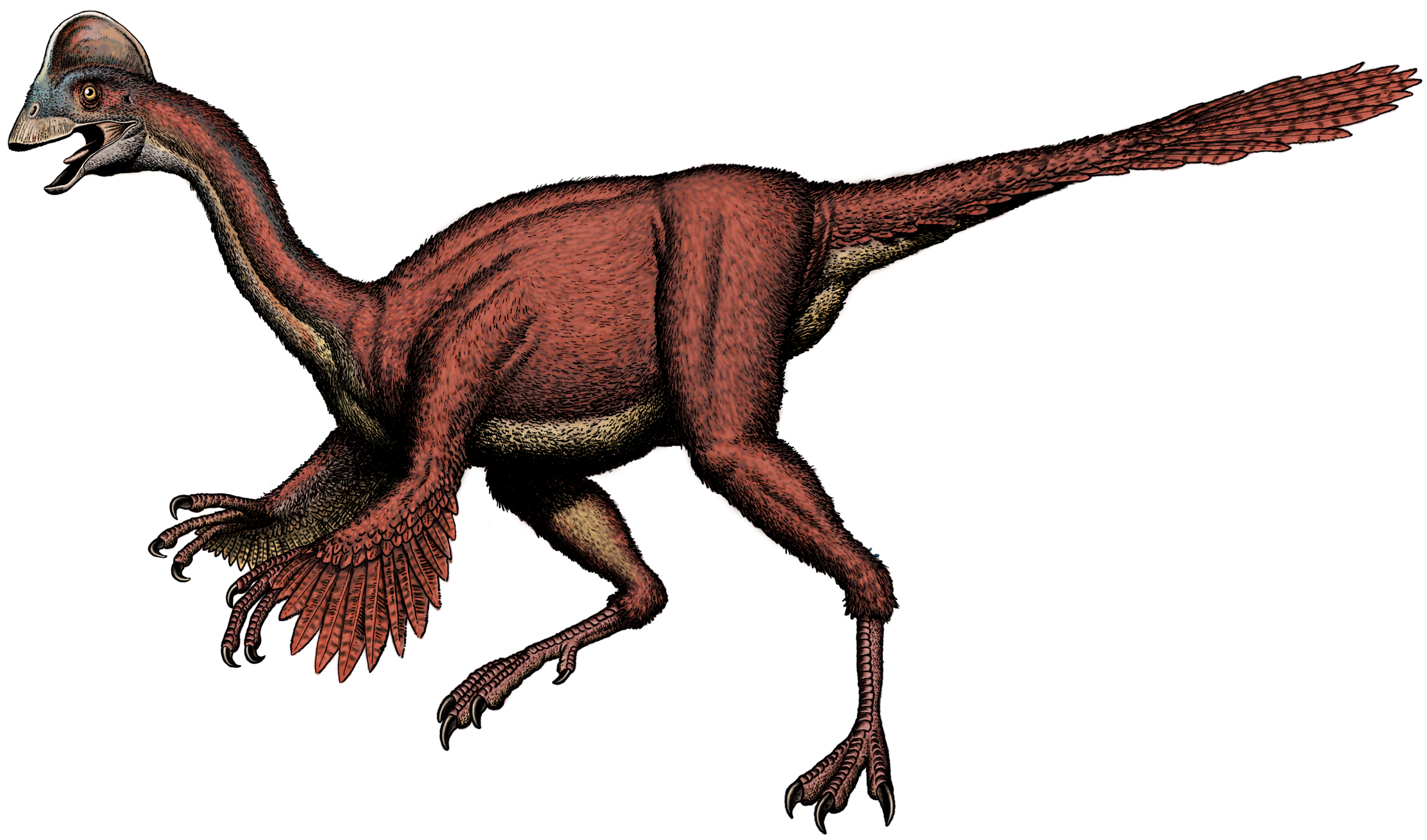 It’s easy to see why Anzu wyliei was described as a bird-like dinosaur in this artist’s depiction based on a scientific study of the three partially complete fossil skeletons: it resembled an ostrich with its feathered body, toothless bill, long slender neck and powerful hind legs. But it also had a crested skull, a tail, and claws at the ends of its forearms. Image courtesy of Robert Walters, Smithsonian Institution.

Anzu wyliei lived 68 to 66 million years ago. It belonged to a group of bird-like dinosaurs known as Oviraptorosaurs, a diverse group of species ranging from the size of a turkey to the 26-foot Gigantoraptor from Inner Mongolia.

Hans-Dieter Sues, a paleontologist at the National Museum of Natural History, an author of the paper, said in a press release:

For almost a hundred years, the presence of oviraptosaurs in North America was only known from a few bits of skeleton, and the details of their appearance and biology remained a mystery. With the discovery of A. wyliei, we finally have the fossil evidence to show what this species looked like and how it is related to other dinosaurs. 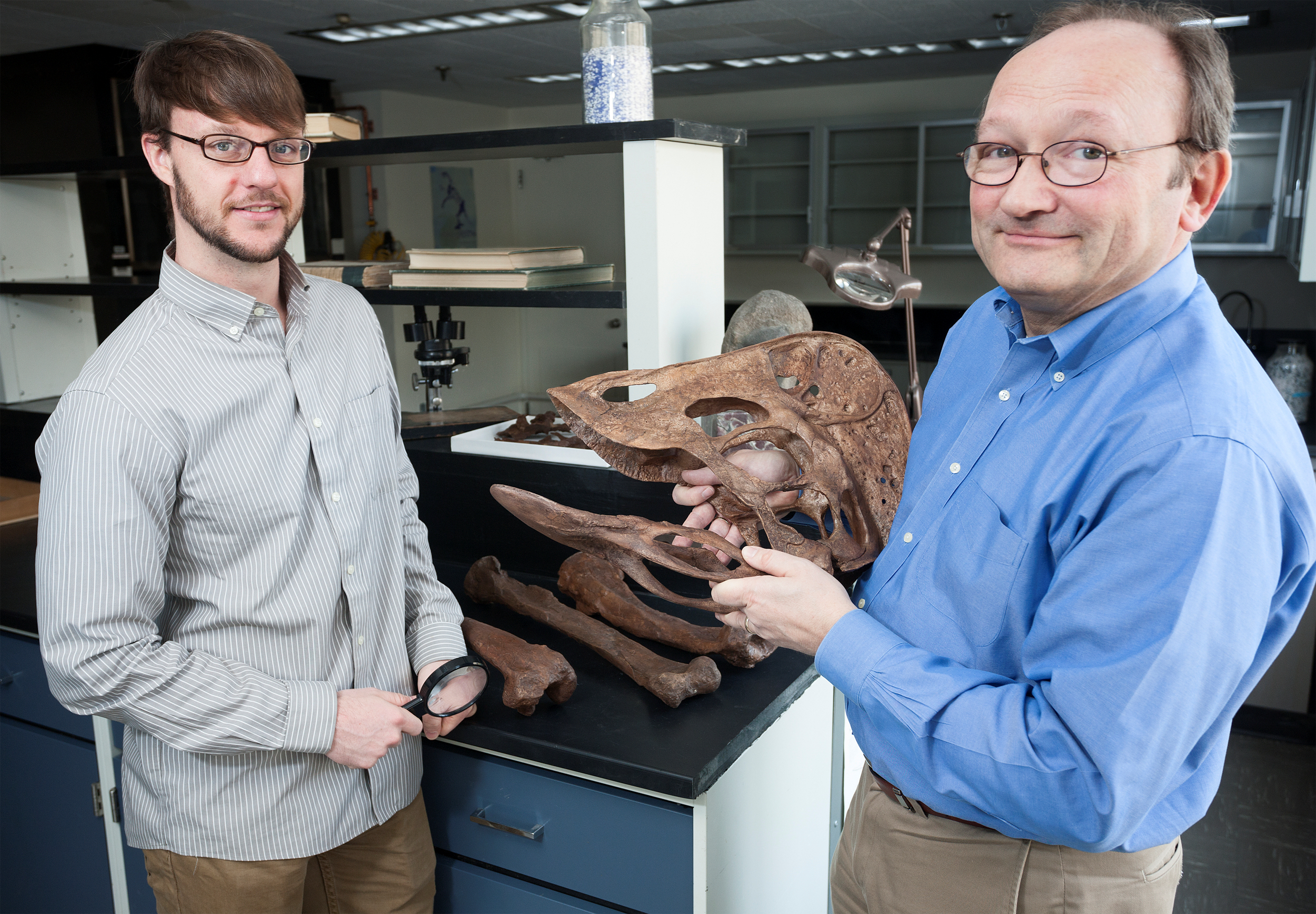 Two of the paper co-authors, Smithsonian scientists Tyler Lyson (left) and Hans-Dieter Sues with an Anzu wyliei skull. Lyson led the team that excavated of one of the specimens uncovered at the Hell Creek formation. Image courtesy of Brittany Hance, Smithsonian Institution.

The fossils revealed interesting details of the individual animals. Two showed signs of injury, one with a broken rib that had healed before death, and the other had an arthritic toe bone.

Together, the three partially complete skeletons revealed an intriguing glimpse of what Anzu wyliei may have looked like in life. The so-called Chicken from hell was about 11 feet in length, measuring 5 feet high at its hip. It had a long neck and hind legs like an ostrich, feathered arms and tail, large sharp claws at the end of its forelimbs, a skull crowned by a tall crest, and like today’s birds, a beak with no teeth. Its skull structure, paleontologists think, indicates that it was a omnivore. 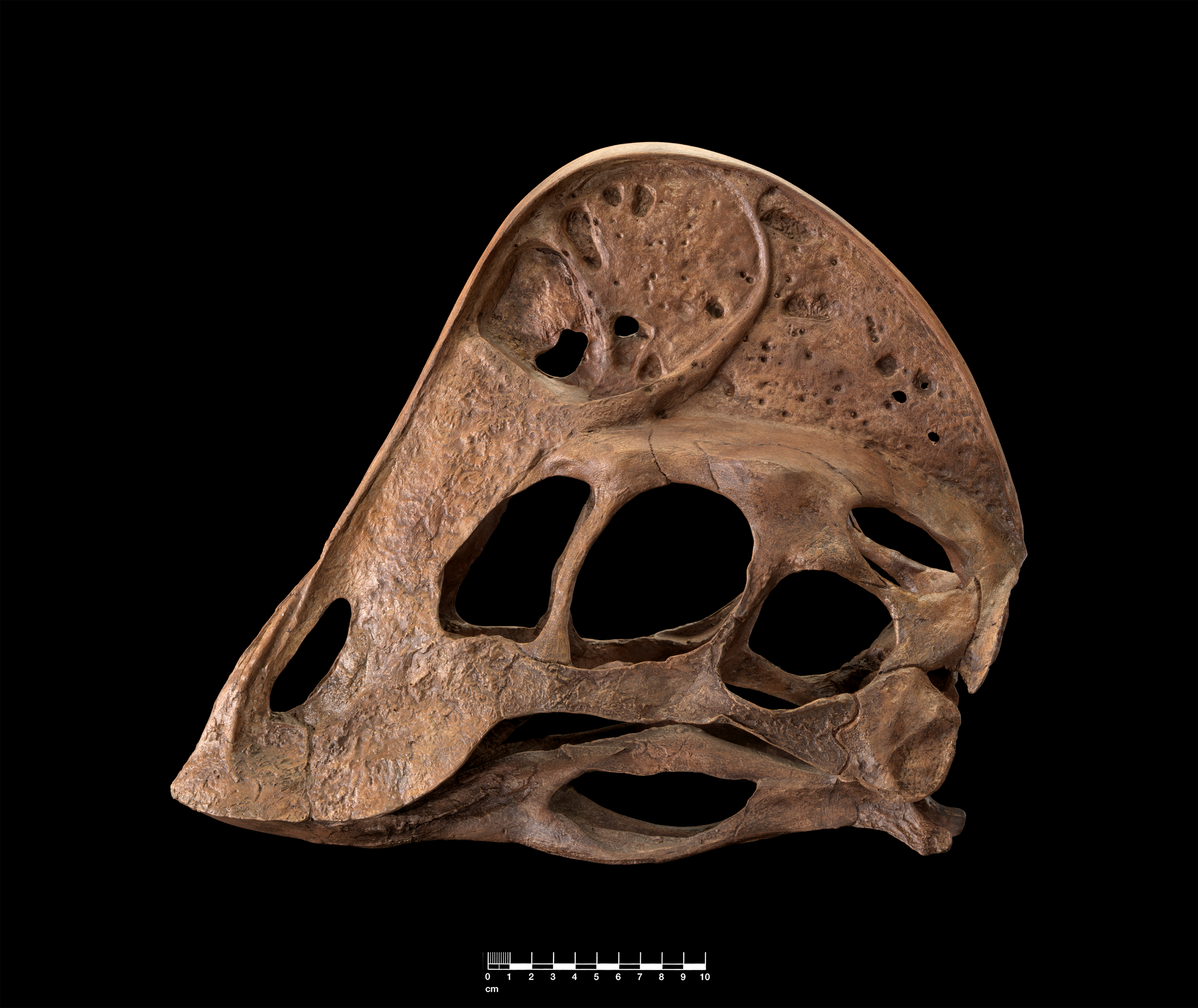 The reconstructed skull of Anzu wyliei shows its large toothless beak that suggests it may have been an omnivore. Image courtesy of James Di Loreto, Smithsonian Institution.

Oviraptorosaurs once lived in a Cretaceous period land mass that has since split to become the modern-day continents of Asia and North America. They’re mostly known from the fossil record in Asia. But until now, only a few incomplete specimens had been found in North America. Anzu wyliei, therefore, is a significant find in that it gives paleontologists a better understanding of North American Oviraptorosaurs, and their evolutionary relationship to Asian Oviraptorosaurs.

Based on the geology of the Hell Creek formation, a late Cretaceous outcropping, Anzu wyliei lived in a humid floodplain, unlike some of their counterparts in Asia that lived in semi-arid environments. This may provide a clue to a finding by the paper’s authors as to why North American oviraptorosaurs were more closely related to each other than they were to most of their Asian cousins, despite the ancient connection between the two current-day landmasses. 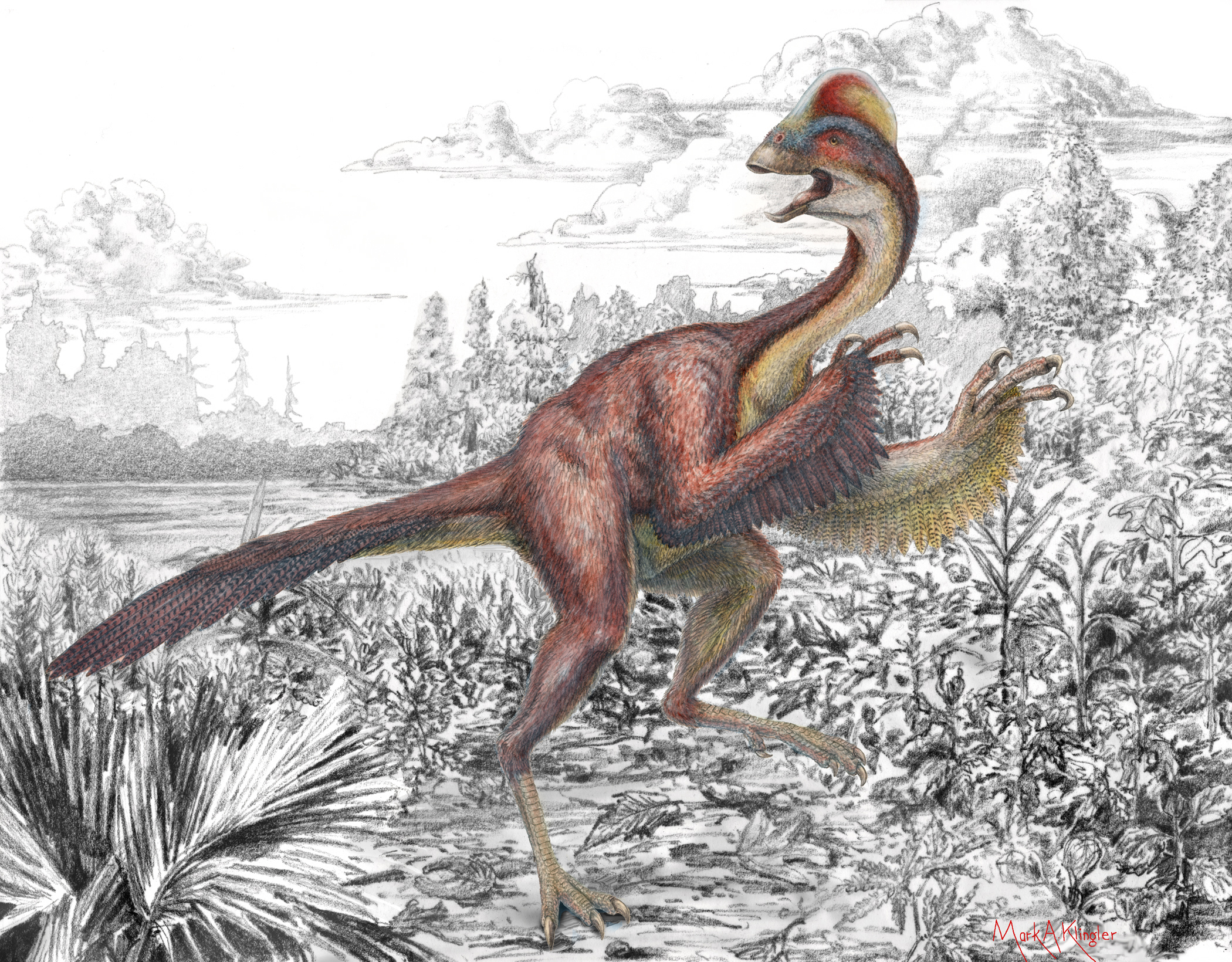 Anzu wyliei, shown here in an artist’s illustration, was a feathered dinosaur about 11 feet in length and 5 feet high at its hip. It lived in a humid floodplain environment. Image by Mark Klingler, Carnegie Museum of Natural History. 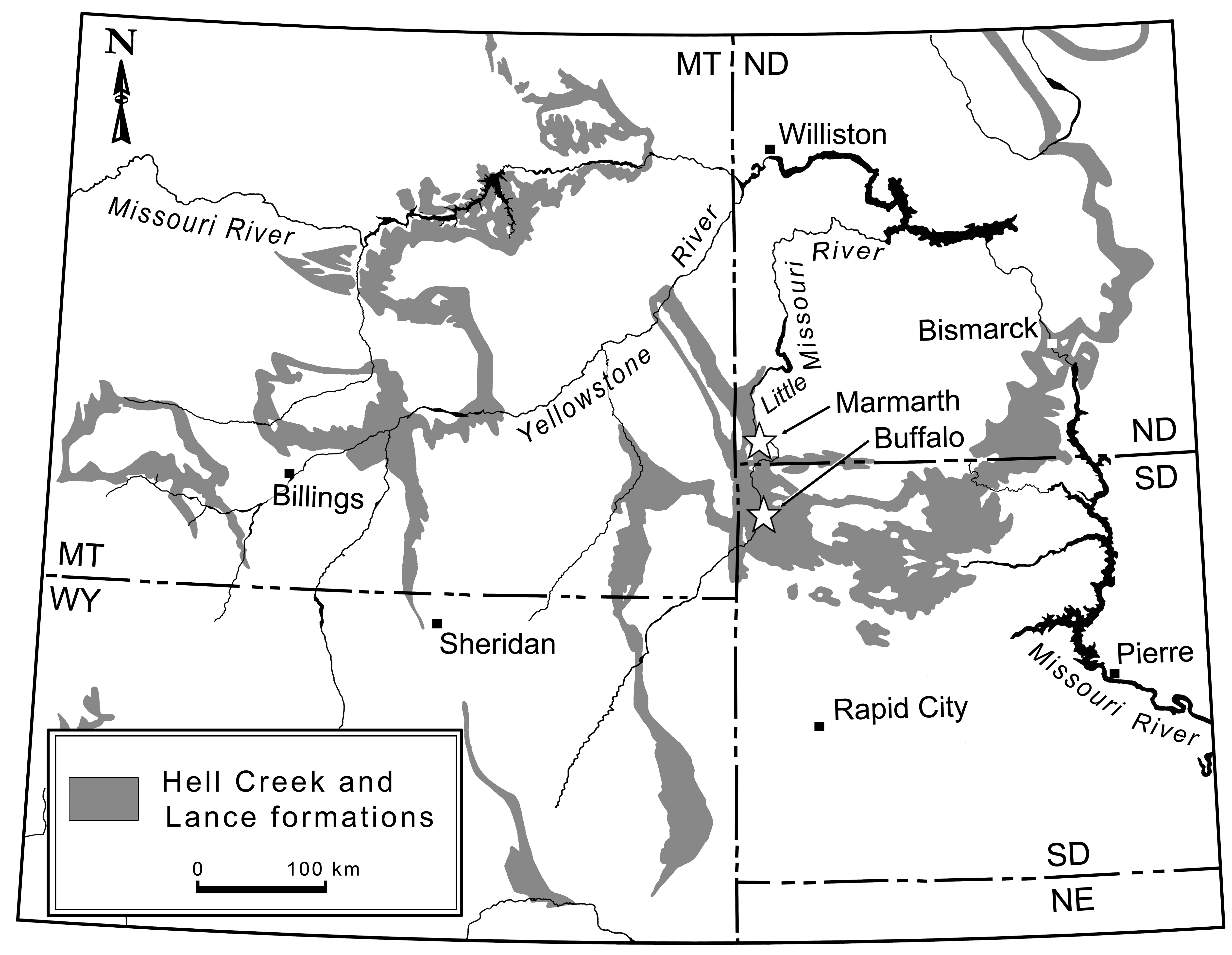 Bottom line: Paleontologists announced the discovery of a new feathered dinosaur species from the Hell Creek formation of North and South Dakota. It looked like an ostrich, except for its tail, forearms ending in sharp claws, and a crested skull. Their findings were reported in a paper published on March 19, 2014 in PLOS ONE. The 68 million year old creature, identified from three partially complete skeletons, was given the taxonomic name Anzu wyliei. Scientists also nicknamed it Chicken from Hell after its discovery site, the Hell Creek formation.