In separate events, mysterious booms shook residents of Alabama, Georgia, and Wisconsin. So far, government activities, earthquakes, and sonic booms are ruled out.

It is a warm, breezy afternoon with plenty of sunshine. Outside, you can smell the flowers blooming. In the horizon, the sky appears slightly tinted with a green haze as the pollen swarms the air. Birds are chirping, and the bees are flying from flower to flower. Spring has finally arrived. Everything is perfect, and care free. All of a sudden, the serene and peaceful landscape screams….

The ground slightly shakes, and it feels like a large tremor is occurring.

Immediately, you tune into your television, open up your facebook and twitter feeds to find out exactly what is going on. You realize you were not the only one who felt the Earth shake from under you. Others, just like yourself, heard a loud explosion, but had no idea where it came from. Was it an earthquake? No, there was no seismic activity in your area that would register high enough to feel the Earth shake from under you. Did a meteor hit the Earth? Did a house explode? Did a plane crash nearby? No signs of a fire or smoke outside your house.

For residents in Alabama, Georgia, and now Wisconsin, this event seems too similar. In parts of these states, residents reported a large “boom” sound, but had no idea what caused it and where it came from. On March 6, 2012 at around 4:30 pm CST, James Spann, chief meteorologist of ABC 33/40 in Birmingham, Alabama began to receive numerous complaints via twitter and facebook from people south of the Birmingham area about a loud noise that shook their houses.

I had reports of the ground shaking, very loud, explosive type booms, rattling dishes, and shaking windows from about 10 counties across Central Alabama, with the most intense reports from parts of Chilton, Bibb, southern Shelby, and Coosa counties.

Image showing some seismic activity during the booms heard/felt in Alabama on March 6, 2012. Image Credit: Steve Jones of alabamaquake.com

“Actually, I see two *sets* of impulses in the filtered / magnified seismogram…there looks to be 7 or 8 discrete pulses in each group, starting at approximately 4:29:35 pm CST and then again at about 4:29:55 pm CST, with each group lasting several seconds. Does this fit with the “ground truth” reports of repeated rumblings that you have been getting from this afternoon? (Yes, it does) The impulses look “non-seismic” and have the appearance of some sort of man-made explosions. Beyond that, I just don’t know…”

In southeast Georgia on the morning of March 15, 2012, residents around Brantley, Camden, Charlton, Glynn and McIntosh counties felt buildings shake and people heard loud noises between the times of 8:15 a.m. and 8:30 a.m. The U.S. Geological Survey released information that there were no earthquakes or seismic activity reported in the area. Naval Submarine Base Kings Bay, the Navy, and Army reported that there were no tests or planes that could have created a sonic boom. The Federal Aviation Administration did not have any reports or signs to show aircraft going supersonic.

Earlier this week, more booms were heard and felt in and around the city of Clintonville, Wisconsin. Small seismic activity was reported, and is now the “official” reason people felt and heard the booms. However, I do not buy this theory. Small seismic activity such as this would not create a loud noise and cause that much shaking, especially if it is small seismic activity less than a 2.0 quake. Many residents felt rounds of booms, and some were so scared, that they were evacuating their homes.

According to ABC News,

“The city has so far managed to rule out problems with the water and sewer system, elevated gas levels, area blasting or mining, industrial businesses, and even military operations, WBAY reported.”

Once again, the mystery continues. No one was hurt, but a lot of people felt nervous and scared as the strange occurrence has no explanation. 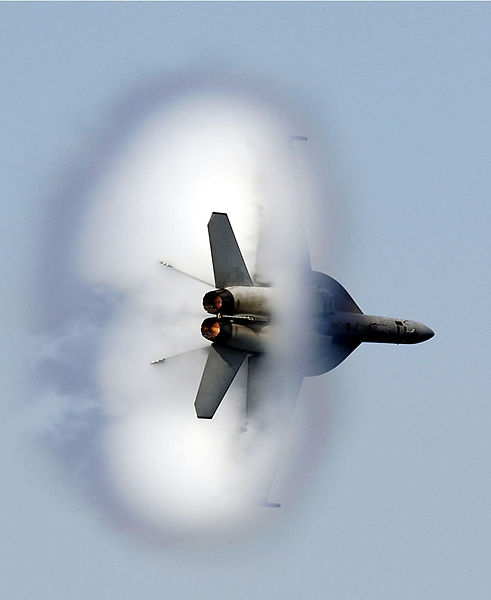 When a jet or plane reaches supersonic speeds, or the rate of travel that exceeds the speed of sound, it can create a sonic boom. A sonic boom is a loud sound associated with shock waves that occurs when a jet/plane travels faster than the speed of sound. These sonic booms can cause a deep, thunder-like sound and can possibly shake buildings. The lower altitude of the aircraft, the louder the boom. Greater altitude also increases the boom’s lateral spread, exposing a wider area to the boom. With this in mind, there is not any proof that a sonic boom from aircraft created these booms, especially since it targeted a large area.

If an earthquake was the reason of the boom in Wisconsin, then why was it ruled out in Alabama and Georgia? What do you think created this loud boom and shaking? It is odd that this is occurring within the same month, and effecting a large area.

Bottom line: A mysterious boom shook buildings and created a loud sound in various cities in Alabama, Georgia, and Wisconsin. Earthquakes were ruled out for Alabama and Georgia, but for parts of Wisconsin, the booms were linked and associated with a minor quake. Government agencies ruled out aircraft or possible sonic booms, and there were no reports of gas explosions, possible meteors, or even a bomb explosion. For residents in these areas, the mystery remains.