Groundbreaking video footage could change the way we look at our closest relatives. 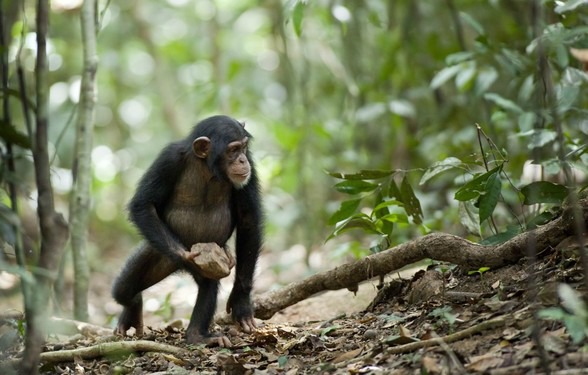 I trampled clumsily through the dense undergrowth, attempting in vain to go a full five minutes without getting snarled in the thorns that threatened my every move. It was my first field mission in the savannas of the Republic of Guinea. The aim was to record and understand a group of wild chimpanzees who had never been studied before. These chimps are not lucky enough to enjoy the comforts of a protected area, but instead carve out their existence in the patches of forests between farms and villages.

We paused at a clearing in the bush. I let out a sigh of relief that no thorns appeared to be within reach, but why had we stopped? I made my way to the front of the group to ask the chief of the village and our legendary guide, Mamadou Alioh Bah. He told me he had found something interesting – some innocuous markings on a tree trunk. Something that most of us wouldn’t have even noticed in the complex and messy environment of a savannah had stopped him in his tracks. Some in our group of six suggested that wild pigs had made these marks, while scratching up against the tree trunk, others suggested it was teenagers messing around.

But Alioh had a hunch – and when a man that can find a single fallen chimp hair on the forest floor and can spot chimps kilometers away with his naked eye better than you can (with expensive binoculars) as a hunch, you listen to that hunch. We set up a camera trap in the hope that whatever made these marks would come back and do it again, but this time we would catch it all on film.

Camera traps automatically start recording when any movement occurs in front of them. For this reason they are an ideal tool for recording wildlife doing its own thing without any disturbance. I made notes to return to the same spot in two weeks (as that’s roughly how long the batteries last) and we moved on, back into the wilderness.

Whenever you return to a camera trap there is always a sense of excitement in the air of the mysteries that it could hold – despite the fact that most of our videos consisted of branches swaying in strong winds or wandering farmers’ cows enthusiastically licking the camera lens, there is an uncontrollable anticipation that maybe something amazing has been captured.

Selection of stone throwing behavior from wild chimpanzees in Western Africa: the behavior ranges from carefully placing stones inside hollow trunks to full-on hurling. For more on how we discovered and recorded this behavior visit: https://www.nature.com/articles/srep22219

What we saw on this camera was exhilarating – a large male chimp approaches our mystery tree and pauses for a second. He then quickly glances around, grabs a huge rock and flings it full force at the tree trunk.

Nothing like this had been seen before and it gave me goose bumps. Jane Goodall first discovered wild chimps using tools in the 1960s. Chimps use twigs, leaves, sticks and some groups even use spears in order to get food. Stones have also been used by chimps to crack open nuts and cut open large fruit. Occasionally, chimps throw rocks in displays of strength to establish their position in a community.

But what we discovered during our now-published study wasn’t a random, one-off event, it was a repeated activity with no clear link to gaining food or status – it could be a ritual. We searched the area and found many more sites where trees had similar markings and in many places piles of rocks had accumulated inside hollow tree trunks – reminiscent of the piles of rocks archaeologists have uncovered in human history.

Videos poured in. Other groups working in our project began searching for trees with tell-tale markings. We found the same mysterious behavior in small pockets of Guinea Bissau, Liberia and Côte d’Ivoire but nothing east of this, despite searching across the entire chimp range from the western coasts of Guinea all the way to Tanzania.

I spent many months in the field, along with many other researchers, trying to figure out what these chimps are up to. So far we have two main theories.
The behavior could be part of a male display, where the loud bang made when a rock hits a hollow tree adds to the impressive nature of a display. This could be especially likely in areas where there are not many trees with large roots that chimps would normally drum on with their powerful hands and feet. If some trees produce an impressive bang, this could accompany or replace feet drumming in a display and trees with particularly good acoustics could become popular spots for revisits.

On the other hand, it could be more symbolic than that – and more reminiscent of our own past. Marking pathways and territories with signposts such as piles of rocks is an important step in human history. Figuring out where chimps’ territories are in relation to rock throwing sites could give us insights into whether this is the case here.

Even more intriguing than this, maybe we found the first evidence of chimpanzees creating a kind of shrine that could indicate sacred trees. Indigenous West African people have stone collections at “sacred” trees and such man-made stone collections are commonly observed across the world and look eerily similar to what we have discovered here. 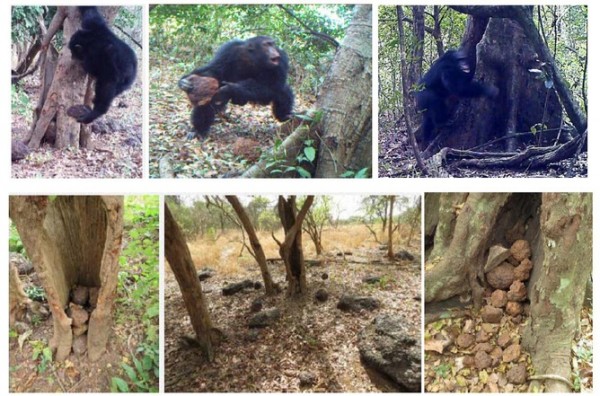 To unravel the mysteries of our closest living relatives, we must make space for them in the wild. In the Ivory Coast alone, chimpanzee populations have decreased by more than 90% in the past 17 years.

A devastating combination of increasing human numbers, habitat destruction, poaching and infectious disease severely endangers chimpanzees. Leading scientists warn us that, if nothing changes, chimps and other great apes will have only 30 years left in the wild. In the unprotected forests of Guinea, where we first discovered this enigmatic behavior, rapid deforestation is rendering the area close to uninhabitable for the chimps that once lived and thrived there. Allowing chimpanzees in the wild to continue spiraling towards extinction will not only be a critical loss to biodiversity, but a tragic loss to our own heritage, too.

You can support chimps with your time, by instantly becoming a citizen scientist and spying on them at www.chimpandsee.org, and with your wallet by donating to the Wild Chimpanzee Foundation. Who knows what we might find next that could forever change our understanding of our closest relatives.