A powerful earthquake struck Saturday morning (local time) off Japan’s east coast, according to the U.S. Geological Survey (USGS). The USGS is now placing the magnitude of the quake at 7.1, down from an earlier estimate of 7.3. No Pacific-wide tsunami warning was issued, but a 3-foot (3-meter) tsunami warning from Japan’s Meteorological Agency included a stretch of Japan’s northeastern coast, including the crippled Fukushima nuclear site. Later, Japanese television reported that the tsunami height was smaller, reaching only 1 foot (30 centimeters) at the plant.

The Fukushima nuclear plant became crippled during a similar situation, although the offshore quake of March 11, 2011 was much stronger at magnitude 9.

Reuters is reporting that there have been no immediate reports of damage to the Fukushima plant:

The operator of Japan’s wrecked Fukushima nuclear plant said on Saturday there was no damage or spike in radiation levels at the station after a large earthquake struck in the ocean east of Japan, triggering a small tsunami.

There were no immediate reports of damage on land from the quake, classified as magnitude 7.1 by the Japan Meteorological Agency, which struck about 370 km (230 miles) out to sea. 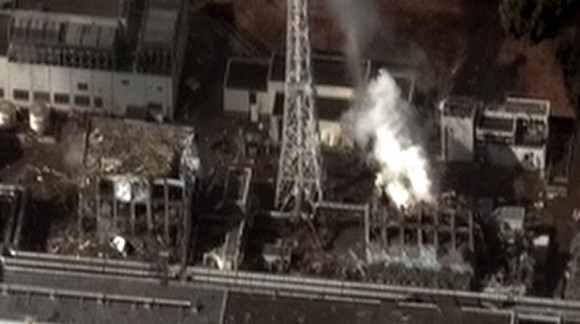 The Fukushima nuclear power plant after the March 11, 2011 Tohoku earthquake and tsunami. Three of the reactors at the plant overheated, causing meltdowns that eventually led to explosions, which released large amounts of radioactive material into the air. Image via Digital Globe via Wikimedia Commons.

The tremor was felt in Tokyo, some 300 miles away.

Bottom line: A very strong earthquake has occurred offshore in Japan. A local tsunami warning included the Fukushima nuclear plant, but plant managers are saying at this time there was no damage.