Nearly 120 million people in the U.S, could be affected by severe weather today. Strong tornadoes, damaging winds over 70 mph, and large hail are possible.

The Storm Prediction Center has issued a high risk (highest category that is rarely issued) for eastern Illinois, most of Indiana, southern Michigan, and parts of western Ohio. The high risk includes the cities of Chicago and Indianapolis with nearly 19 million people living in this risk area. A significant severe weather outbreak is likely, with damaging winds and strong tornadoes being the main threats. Because today is a Sunday, people may not be aware of the developing situation. Now is the time to be ready before the storms develop later this afternoon and into the evening hours. 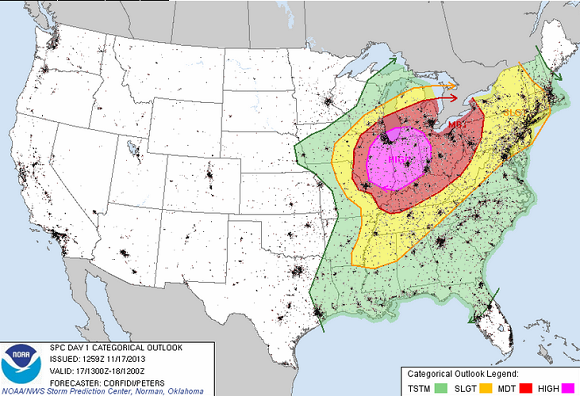 Image shows the probability of one inch diameter hail or larger within 25 miles of a point. Image Credit: SPC

If you are in any of the risk areas, you should be aware that severe weather is possible. A very strong cold front with an intense area of low pressure will swing into the Ohio River Valley and produce plenty of wind shear that will help enhance thunderstorm development. With such a dynamic storm system in place, a squall line of intense thunderstorms capable of producing 70-80 miles per hour (mph) winds is likely later this evening. Before this line develops, we could see discrete storms develop ahead of the system which will likely be more prone to produce tornadoes. Some of these supercells could produce large and violent tornadoes too. Please be fully aware that these storms will probably be moving fast. You will not be able to get out of harm’s way once the storm arrives. Now is the time to make plans.

The Storm Prediction Center has already issued a PDS Tornado Watch for parts of eastern Missouri, eastern Iowa, most of Illinois, northwest Indiana, and into southern parts of Wisconsin. The watch is valid from 8:40 AM CST (Sunday, November 17, 2013) until 4 PM CST. A PDS Tornado Watch means it is a particularly dangerous situation. PDS watches are rare, so you should be very alert for changing weather throughout the day.

If you are anywhere inside the red box, you need to be on special alert! This is a PDS Tornado watch, meaning it is a potentially dangerous situation! Image Credit: SPC

From the the SPC regarding this watch:

THE NWS STORM PREDICTION CENTER HAS ISSUED A

* EFFECTIVE THIS SUNDAY MORNING AND AFTERNOON FROM 840 AM UNTIL
400 PM CST.

…THIS IS A PARTICULARLY DANGEROUS SITUATION…

THE TORNADO WATCH AREA IS APPROXIMATELY ALONG AND 100 STATUTE
MILES EAST AND WEST OF A LINE FROM 25 MILES SOUTH SOUTHEAST OF
SCOTT AFB ILLINOIS TO 40 MILES NORTHEAST OF MADISON WISCONSIN.
FOR A COMPLETE DEPICTION OF THE WATCH SEE THE ASSOCIATED WATCH
OUTLINE UPDATE (WOUS64 KWNS WOU1).

REMEMBER…A TORNADO WATCH MEANS CONDITIONS ARE FAVORABLE FOR
TORNADOES AND SEVERE THUNDERSTORMS IN AND CLOSE TO THE WATCH
AREA. PERSONS IN THESE AREAS SHOULD BE ON THE LOOKOUT FOR
THREATENING WEATHER CONDITIONS AND LISTEN FOR LATER STATEMENTS
AND POSSIBLE WARNINGS.

DISCUSSION…ONE OR MORE BROKEN BANDS OF SUPERCELLS ARE EXPECTED TO
DEVELOP THIS MORNING AND RAPIDLY SPREAD EAST/NORTHEAST ACROSS THE
WATCH AREA TODAY. GIVEN THE COMBINATION OF MODERATE INSTABILITY AND
VERY STRONG VERTICAL SHEAR…CONDITIONS WILL BE FAVORABLE FOR LONG
TRACKED…SIGNIFICANT TORNADOES. LARGE HAIL AND CORRIDORS OF WIND
DAMAGE WILL ALSO BE LIKELY.

What should you do?

If you live in the moderate or high risk areas, be fully aware that you have a heightened risk to see damaging weather in your neighborhood. If you live in a house that is not safe, you should really consider staying at a friends or relatives house that might have a basement or is constructed better for your safety. You should likely avoid being in rooms where trees are nearby in case damaging winds knock them over. You should wear a bicycle helmet if a tornado warning is issued in your area as they can save lives from falling debris. 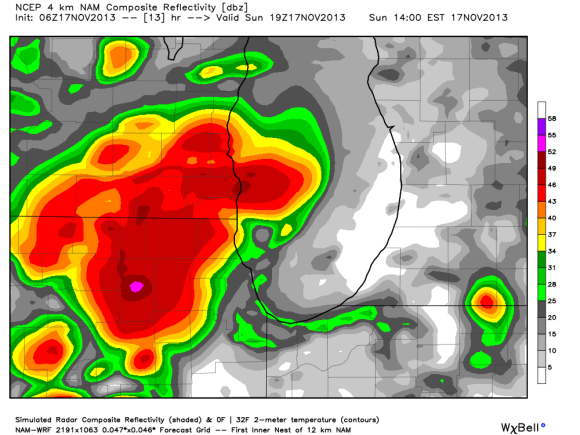 It is Sunday, which means many Americans are tuning in to watch their favorite NFL football teams. Unfortunately, the Chicago Bears are hosting the Baltimore Ravens at 1 p.m. EST, which is the same time severe weather will push into the region. Chicago is highlighted in the high risk areas. Storms are expected to develop in the early afternoon hours across parts of Missouri, Iowa, and into Illinois. The NAM model (image above) clearly shows these storms pushing into Chicago during the same time the football game is being played. If you are going to this game, you need to know what to do. High winds and tornadoes are the main threat. Others games that I am also concerned about is Cleveland at Cincinnati. The NFL should strongly consider delaying or canceling these games today. The weather is simply too dangerous for sporting events.

Bottom line: Nearly 120 million people in the United States could be affected by severe weather on Sunday, November 17, 2013. Strong tornadoes, damaging winds over 70 mph, and large hail are possible. These storms will be moving quickly and the tornadoes that do form could be rain wrapped, meaning it will be hard to see them. Please have a NOAA Weather Radio on you and tell all of your friends that live in these affected areas to be weather ready. We have big NFL football games being played during the same hours these storms are expected to fire up. Safety is far more important than watching football. Be safe!