Major Hurricane Odile struck the Baja Peninsula and left extensive damage and flooding across the area. Photos of the damage and firsthand reports, here.

The active Eastern Pacific hurricane season continues to churn up powerful storms. On September 15, 2014 at 12:45 a.m. EDT (445 UTC), major Hurricane Odile slammed into Mexico’s Baja Peninsula. It made landfall in Cabo San Lucas, a popular tourist destination, with a population of roughly 70,000 people. The storm made landfall as a Category 3 storm with sustained winds of 125 miles per hour (mph) or 110 knots. Odile was the first known storm to hit Cabo San Lucas as such a strong intensity. Odile ties with Hurricane Olivia (1967) as the strongest hurricane to make landfall in the satellite era in the state of Baja California Sur. Heavy rain, flooding, and damaging winds were the main threat as it pushed ashore. Fortunately, the storm was undergoing an eyewall replacement cycle, which typically means a gradual weakening until a new eye forms. However, despite the cycle occurring, the National Hurricane Center did not see much in weakening as it crashed ashore. There is no doubt we’ll see some extensive damage out of that area. Flooding will be the biggest concern as it continues to push to the north. 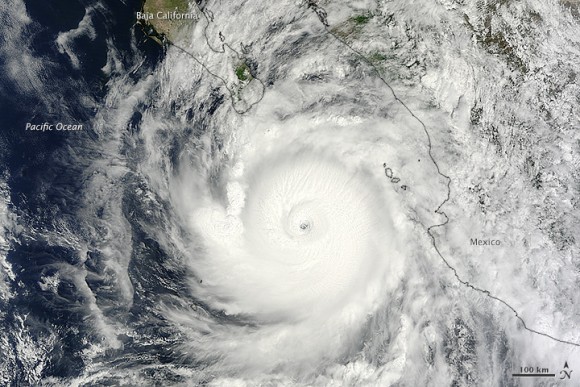 Hurricane Odile produced damaging winds that toppled over trees and power lines. Windows from cars and buildings shattered from the howling winds. Los Cabos airport received extensive damage, and it is unknown for how long it will be closed. Cabo San Lucas is a popular location for travelers, and several hotels received significant damage. Based off images online, it looks like a good bit of the damage was actually from damaging winds that gusted over 100 mph. As of now, there have been no reports of deaths related to this storm. 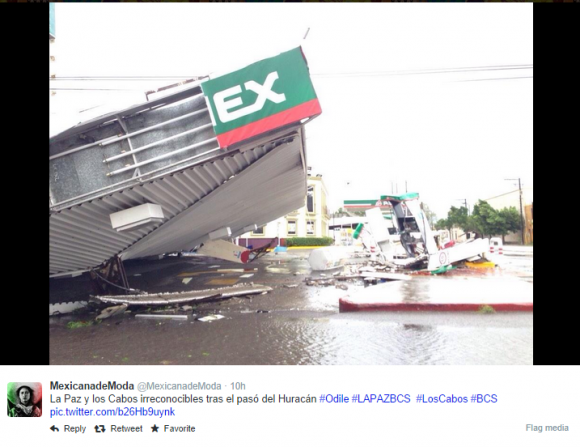 Damage in parts of Los Cabos. Image via Twitter via @MexicanadeModa 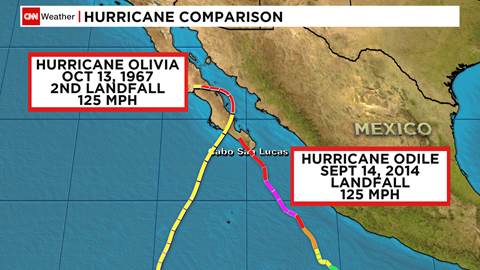 Hurricane Olivia is one of the few storms that matched the strength of Odile. Image via CNN Weather 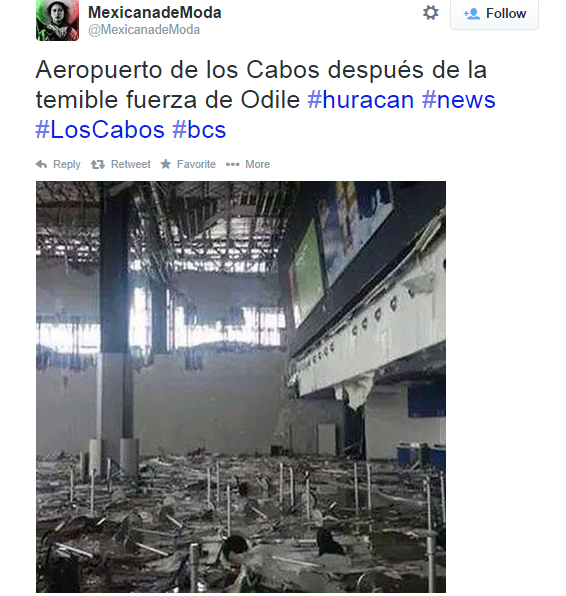 Extensive damage in the Cabo San Lucas Airport. Image via Twitter via @MexicanadeModa

iCyclone, a hurricane chasing group led by Josh Morgerman, was in Cabo San Lucas as the storm made landfall. They were able to document the series of events as the conditions deteriorated. Through Twitter and Facebook, Morgerman was able to describe his experience as the storm battered them, when it began to calm as the eye was passing over them, and the violent conditions that occurred as the second half of the storm pushed through. 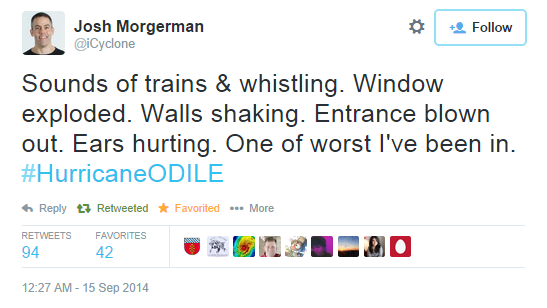 On Facebook, Josh Morgerman went into great detail on his experiences as the storm battered Cabo San Lucas:

Midnight. CODE RED. At 11:46 pm, the backside of the eyewall hit — no buildup — just all of a sudden the howling and banging started up again. The hotel manager joked that it sounded like gunshots. Then at maybe midnight… BOOM!!!!! The entire glass wall of the lobby EXPLODED– with glass, pieces of building, everything flying to the other end of the lobby. Like an explosion in an action movie. A hotel worker and I ducked under the reception counter — I physically grabbed his head and pushed it under the counter. Glass was everywhere — my leg gashed — blood. We crawled into the office — me, the worker, and the manager — but the ceiling started to lift up. After five minutes of debate — breathing hard like three trapped animals — we made a run for it — went running like HELL across the lobby — which is now basically just OUTSIDE — and made it to the stairwell and an interior hallway. Two nice women dressed my wound. I don’t know where my cameradude, Steven, is. I need to find him. People are scared. 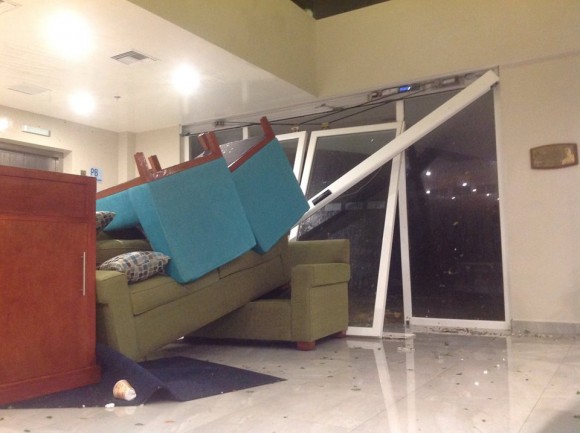 Damage to the hotel in Cabo San Lucas. Image via iCyclone via Facebook

1 am. I found Steve — we were tearfully reunited. I say tearfully because I was so happy to find him alive and OK in the chaos I got emotional. After roaming the flooded, dark hallways alone, I found him sheltered in a bathroom next to the lobby with two other guests. The lobby itself is a heap of wreckage. Steve was in the cloud of flying glass as that wall exploded. Like us, he had to run like hell — and like me, he was bloodied. Steve saw me and my partners scampering like rats across the lobby earlier– when we made our escape– but I didn’t hear his calling over the roar of the wind. What you see here is my leg — dressed in a towel — Steve’s wound dressed in duct tape, and a shoe he fashioned out of duct tape (because he lost his). We’re in an interior hall now. We’re OK. I think the wind is quieting down. I think. Parts of the hotel are smashed beyond recognition.

Possible rainfall totals over the next five days. Image via Weather Prediction Center

Hurricane Odile is expected to weaken as it pushes further inland, cutting itself off from open waters and a favorable environment for sustaining itself. The storm is expected to affect parts of the Southwest United States where it could produce heavy rain and flooding. The Weather Prediction Center is forecasting rainfall totals of over three inches possible in parts of Arizona and New Mexico. The remnants of Odile will actually be absorbed into a large trough that will dig into the Central and Eastern United States by the end of the week. 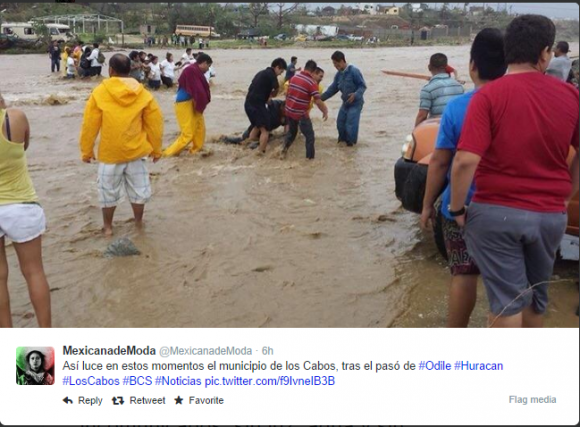 Bottom line: Major Hurricane Odile made landfall late Sunday evening (PDT) on September 14, 2014 as a Category 3 storm and sent damaging winds and heavy rain into parts of Cabo San Lucas. Windows were damaged, power was out to thousands of people, and the Los Cabos airport saw extensive damage. Clean water is becoming scarce, and communication is poor. We probably don’t understand how bad it is at this moment due to poor communication out of the region. Typically it takes time to realize the true extent of damage and chaos after a devastating storm as communication is lacking. It is one of the most powerful storms to ever hit the region. Prayers go out to the people affected in that region.