Years of data on storms and sea surface temps show a correlation between a warm North Atlantic Ocean – more destructive hurricanes – and a fire-prone Amazon. 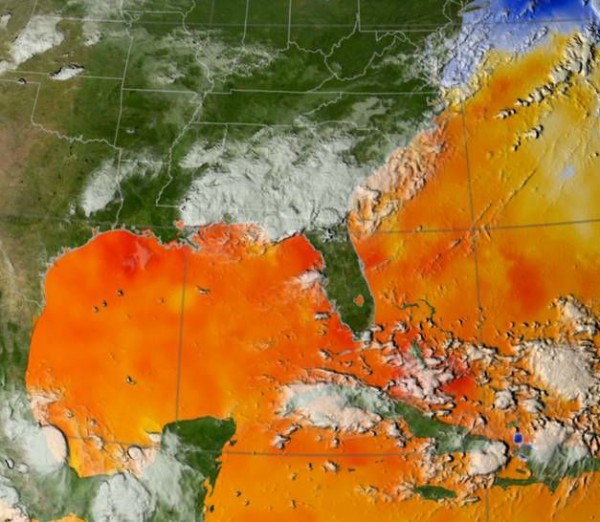 NASA announced on August 24, 2015 that researchers have uncovered a remarkably strong link between high wildfire risk in the Amazon basin and devastating North Atlantic hurricanes. They say that, in addition to the well-understood east-west influence of El Niño on the Amazon, there is also a north-south control on fire activity that is set by the state of the tropical North Atlantic Ocean.

According to these researchers – from the University of California, Irvine and NASA – in years of high numbers of hurricanes and high fire risk, warm waters in the North Atlantic help hurricanes develop and gather strength and speed on their way to North American shores. They also tend to pull a large belt of tropical rainfall – known as the Intertropical Convergence Zone – to the north, the researchers said, drawing moisture away from the southern Amazon.

As a consequence, the researcher explained, ground water is not fully replenished by the end of rainy season, so coming into the next dry spell, when there is less water stored away in the soils, the plants can’t evaporate and transpire as much water out through their stems and leaves into the atmosphere. The atmosphere gets drier and drier, creating conditions where fires can spread rapidly three to six months later. Ground-clearing fires set by farmers for agriculture or new deforestation can easily jump from fields to dense forests under these conditions.

The climate scientists’ findings appeared in the journal Geophysical Research Letters on August 12, 2015, near the 10th anniversary of Hurricane Katrina’s calamitous August 25, 2005 landfall at New Orleans and the Gulf Coast. James Randerson is an Earth system scientist at University of California, Irvine and senior author on the paper. Randerson said:

Hurricane Katrina is, indeed, part of this story. The ocean conditions that led to a severe hurricane season in 2005 also reduced atmospheric moisture flow to South America, contributing to a once in a century dry spell in the Amazon. The timing of these events is perfectly consistent with our research findings.

The team pored over years of historical storm and sea surface temperature data from the National Oceanic and Atmospheric Administration and fire data gathered by NASA satellites. The results showed a striking pattern, a progression over the course of several months from a warm condition in the tropical North Atlantic to a dry and fire-prone southern Amazon, and more destructive hurricane landfalls in North and Central America.

According to Randerson, the importance of this study is that it may help meteorologists develop better seasonal outlooks for drought and fire risk in the Amazon, leveraging large investments by NOAA and other agencies in understanding hurricanes. Randerson said:

The fires we see in the U.S. West are generally lightning-ignited, whereas they are mostly human-ignited in the Amazon, but climate change can have really large effects on the fire situation in both regions. Keeping fire out of the Amazon basin is critical from a carbon cycle perspective. There’s a huge amount of carbon stored in tropical forests. We really want to keep the forests intact.

Bottom line: A study in Geophysical Research Letters on August 12, 2015 suggests that there is a strong link between high wildfire risk in the Amazon basin and hurricanes that ravage North Atlantic shorelines.