Lifeform of the week: Woodpeckers

These birds don’t need a hammer or a helmet to do some serious woodworking.

After a rare night of comfortable camping sleep, you are prematurely awakened by a repetitive drumming sound. Not loud enough to be a jackhammer, too rhythmic to be other campers assembling their tent – what could be the cause? In more parts of the world than not, the culprit is likely a woodpecker, a bird that makes a living drilling holes with its beak, primarily in wood. How do these feathered lightweights carve out dents large enough to nest in without the aid of power tools and with no apparent damage to their bird brains? It turns out it’s all in their heads.

In addition to their penchant for battering branches, woodpeckers also share distinctive plumage. Many of these birds (particularly the males) wear striking red or yellow feathers on their heads and chests. Common names of different woodpecker species – Red-headed, Red-crowned, Red-breasted, Yellow-bellied, Yellow-eared, and so on – derive from this characteristic.

Other physical traits that set woodpeckers apart from other birds help them cling to trees while they do their drilling. Most birds have feet with three toes facing forward and a forth facing backward, but woodpeckers’ feet exhibit a zygodactyly arrangement – two forward- and two backward-facing toes. This configuration is useful for species that do more climbing of branches than perching. Additional support is provided by the woodpeckers’ tails, which are especially stiff and can be braced against the climbing surface.

Woodpeckers have a broad distribution. They can be found throughout the world, with the exception of Antarctica, Madagascar, Australia, and certain oceanic islands. 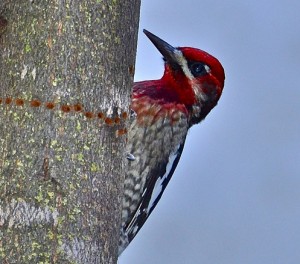 A sapsucker and its handiwork. Image Credit: Linda Tanner.

One of the fruits of these birds’ persistent hammering at trees is food. It’s not the wood they’re after, but rather the wood-boring insects and grubs concealed behind the bark. While much of this insect excavation occurs on dead trees, some woodpecker species also chip away at living trees. Sapsuckers, as their name implies, like to drill into live trees and drink the sticky sap inside (though they eat bugs as well). In general, woodpeckers don’t specialize in a single food source, but adjust their eating habits based on what’s in season.

Nesting is another reason for the birds’ chipping away at trees. Drilling larger holes yields a fine place to lay their eggs (and, conveniently, the shavings generated by this wood-working can serve as padding for the nest).* 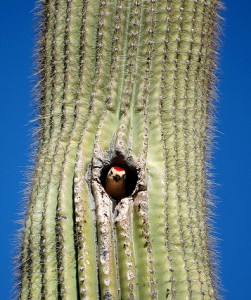 The sound of the pecking is also a form of communication. Woodpeckers drum to attract mates as well as remind others of territorial boundaries.

Not all species employ their beaks exclusively for pecking trees. Desert-dwelling species such as the Gila Woodpecker get by in their barren environment by nesting in cacti.

Every year numerous helmet-clad football players in high schools, colleges and the major football leagues sustain head injuries despite these precautions, sometimes causing permanent damage. And yet woodpeckers spend the average day repeatedly slamming their beaks into trees at speeds of six to seven meters per second (about 15 mph), seemingly without even getting a headache. The average woodpecker drums on its chosen surface about 12,000 times a day. That’s a lot of head banging. 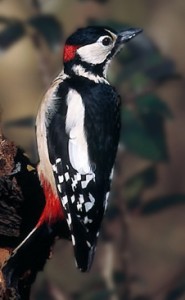 What makes these birds so impervious to cranial trauma? According to an October 2011 article published in the journal PLoS One, their advantage is not one single adaptation, but a set of physical traits that collectively offer sufficient protection. Among these are a spongy plate-like bone structure in the skull, a beak whose lower bone is longer than its upper and a uniquely elongated hyoid bone. The hyoid bone, which in human anatomy resides at the upper portion of the neck near the chin, is extended forward in birds and forms a support for the tongue. In woodpeckers the bone has a greater scope, threading through the bird’s right nostril, then forking into two parts that wrap around the skull. The authors note that this configuration may work like a “safety belt” for the brain. 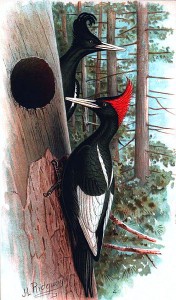 As with yetis and unicorns, there is some debate over whether the legendary Imperial Woodpecker exists. Well, technically the issue is whether it still exists. Depending on whom you ask, the bird is either completely extinct or just critically endangered. If any have survived, they would be the largest existing woodpeckers – reportedly measuring up to two feet in length. The species garnered headlines in late October of 2011, when the Cornell Lab of Ornithology made available for public viewing for the first time the only film footage ever taken of the mysterious bird. The footage was shot by amateur ornithologist (and professional dentist) Dr. William Rhein in 1956 in the Durango region of Mexico, and is considered the last confirmed sighting of the species.† Imperial Woodpeckers were once relatively common in the high-altitude pine forests of Mexico’s Sierra Madre Occidental, but their numbers fell as industrial logging chipped away at their habitat. Your chances of seeing one in the wild now are somewhere between improbable and impossible. But you can see the digitized celluloid version of the enormous bird here (video).

* A few weeks back, I mentioned that owls nest in pre-made cavities rather than building their own nests. Well, it happens that some owl species (including the Elf Owl and the Flammulated Owl) like to take up residence in holes drilled by woodpeckers.

† While other sightings have been reported after that date, none managed to generate photographic evidence.