An iceberg – about the size of the U.S. state of Delaware – split off from Antarctica’s Larsen C ice shelf sometime between July 10 and 12. 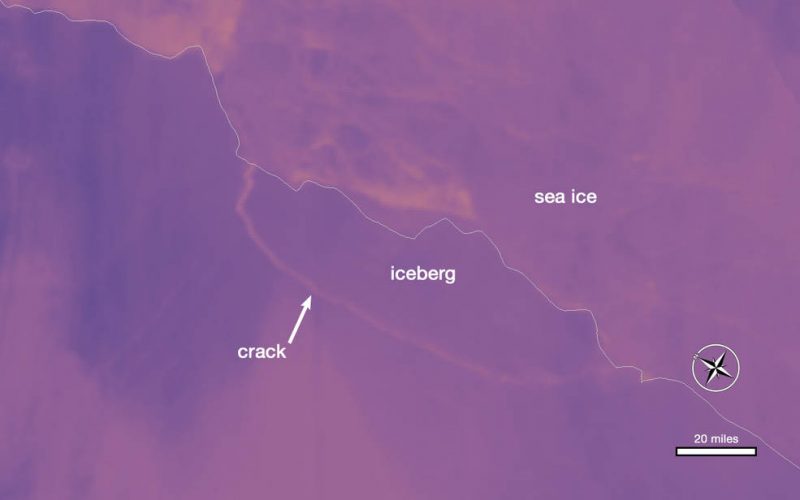 Thermal wavelength image of a large iceberg, which has calved off the Larsen C ice shelf. Darker colors are colder, and brighter colors are warmer, so the rift between the iceberg and the ice shelf appears as a thin line of slightly warmer area. Image from July 12, 2017, from the MODIS instrument on NASA’s Aqua satellite. Image via NASA/ NASA Worldview.

In recent days, several satellites in Earth-orbit and a British Antarctic research project all have witnessed the birth of a huge iceberg – about the size of the U.S. state of Delaware – which split off from Antarctica’s Larsen C ice shelf sometime between July 10 and July 12. Project Midas, an Antarctic research project based in the United Kingdom, was the first to report the breakage. NASA’s Aqua satellite captured images, such as the image above, and the joint NASA/NOAA Suomi-NPP satellite also confirmed it.

The new iceberg is no surprise. Scientists had been aware of and monitoring a growing crack in the Larsen C ice sheet for many years.

Animation of the growth of the crack in the Larsen C ice shelf, from 2006 to 2017, as recorded by NASA/ USGS Landsat satellites.

Larsen C is a floating platform of glacial ice on the east side of the Antarctic Peninsula. It’s the fourth largest ice shelf ringing Earth’s southernmost continent. For decades until 2014, a crack had been slowly growing into the ice shelf; then, suddently, it started to spread more rapidly northwards. The result is the new iceberg.

Now that the close to 2,240 square-mile (5,800 square kilometers) chunk of ice has broken away, the Larsen C shelf area has shrunk by approximately 10 percent. Kelly Brunt (@kbrunt on Twitter), a glaciologist with NASA’s Goddard Space Flight Center in Greenbelt, Maryland, said in a statement from NASA:

The interesting thing is what happens next, how the remaining ice shelf responds. Will the ice shelf weaken? Or possibly collapse, like its neighbors Larsen A and B? Will the glaciers behind the ice shelf accelerate and have a direct contribution to sea level rise? Or is this just a normal calving event?

Read more from NASA about the new iceberg 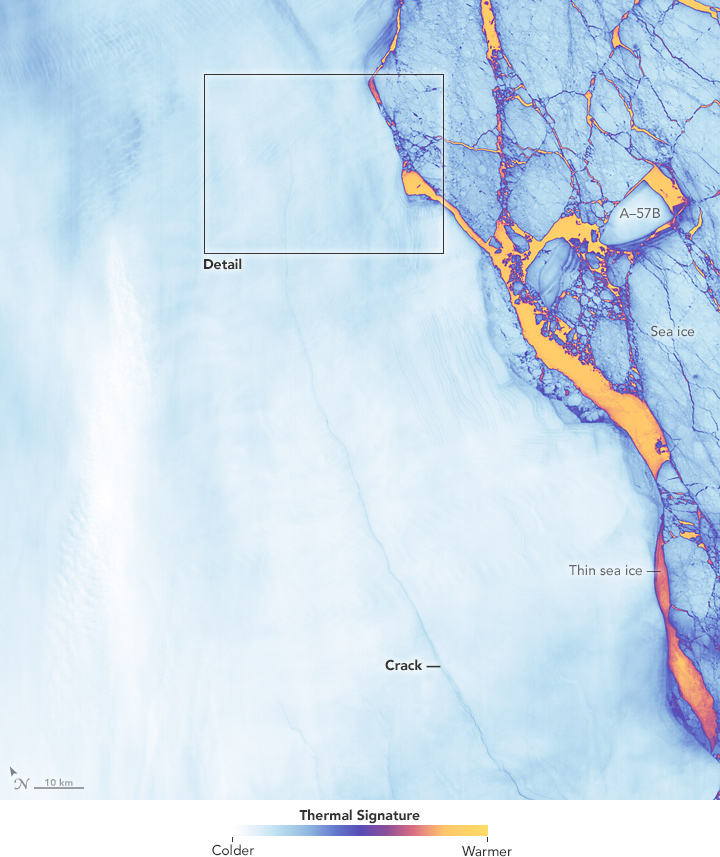 Throughout the sunlit months of late 2016 and early 2017, scientists watched closely as a crack grew across the Larsen C ice shelf on the Antarctic Peninsula. On June 17, 2017, the Thermal Infrared Sensor (TIRS) on Landsat 8 captured a false-color image of the crack and the surrounding ice shelf. It shows the relative warmth or coolness of the landscape. Orange depicts where the surface is the warmest, most notably the areas of open ocean and of water topped by thin sea ice. Light blues and whites are the coldest areas, spanning most of the ice shelf and some areas of sea ice. Dark blue and purple areas are in the mid-range. Image via NASA Earth Observatory.

By the way, it was NASA, probably, that first compared the iceberg’s size to the U.S. state of Delaware; the iceberg measures 2,240 square miles, and Delaware has 1,954 square miles. Many U.S. news organizations have published that comparison also (including EarthSky), but different global news sources compared it to different parts of the globe. The New York Times ran an amusing story about them this morning, which included the comparisons and tweet below:

The Associated Press went with the same description offered by the researchers: a volume about twice that of Lake Erie.

I'll standardize it for the press: The iceberg that broke from Antarctica today was roughly the size of 29 million cats.

Bottom line: An iceberg – about the size of the U.S. state of Delaware – split off from Antarctica’s Larsen C ice shelf sometime between July 10 and 12.