UPDATE OCTOBER 2, 2015. Joaquin – now a Category 4 hurricane – has been slowly pounding the Bahamas and is now moving out to sea. Meanwhile, local National Weather Service offices now believe that flooding caused by Hurricane Joaquin this weekend could be “historical” in parts of the U.S. Southeast and Mid-Atlantic. Flash flood watches have already been issued for parts of Northeast Georgia, South Carolina, North Carolina, and northwards into the Mid-Atlantic including Washington D.C. through Sunday night. Meanwhile, the hurricane will also likely impact broad swaths of the U.S. Northeast, including New York City and New Jersey. Heavy rain and flooding should start Friday and last through the weekend, possibly into early next week.

Along the coast, expect rip currents, beach erosion, and coastal flooding. Gusty winds thanks to tightening pressures will be able to knock over trees and power lines. The biggest impacts are expected across South Carolina and North Carolina through the weekend. NOAA’s Weather Prediction Center (WPC) is forecasting at least 10-15 inches of rain with isolated areas receiving nearly 20 inches. Rain this quickly in a short period of time will likely result in flash flooding.

"Thousand-year rainstorm" to hit the Carolinas this weekend. What you need to know: https://t.co/07uj6yjScc pic.twitter.com/ZP544WzAlv

The good news is that Hurricane Joaquin will likely stay offshore, with landfall in the U.S. looking increasingly unlikely.

Over the past week, we have already seen several inches of rain in parts of the Southeast, Mid-Atlantic, and into the Northeast from separate storms. With saturated grounds, it won’t take much rain for flooding to develop. Several areas have already received over three inches of rain in the past seven days. Also, winds are likely to increase as the jet stream becomes negatively tilted and tries to interact with Joaquin.

The combination of saturated soils and wind will also likely create a threat from falling trees and power lines. 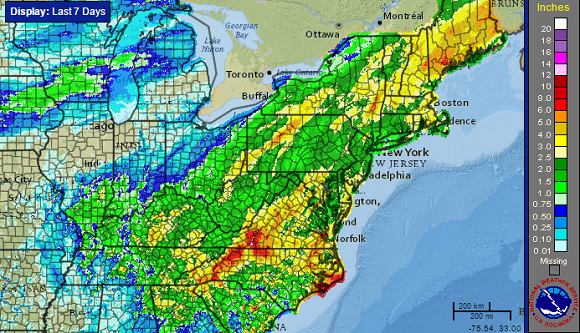 Rainfall totals across the East Coast over the past seven days. Image via NOAA

Joaquin has been moving slowly over the Bahamas, as a Category 4 storm with sustained winds of 130 mph. No doubt in my mind that parts of the Bahamas have been heavily damaged. Imagine how horrifying it would be to experience hurricane force conditions over 12 to 24 hours. And it’s not over yet. The National Hurricane Center advisory this morning (October 2, 5 a.m. EDT) said:

…HURRICANE CONDITIONS TO CONTINUE OVER THE CENTRAL BAHAMAS TODAY…

Joaquin is expected to push to the north later today and eventually push to the northeast away from the United States. While some models still hint at a United States landfall, the majority of the models have trended much further east and towards Bermuda. If this solution occurs, then Bermuda will likely have to get ready for some kind of impact from this storm by late this weekend and into early next week.

Hurricane Joaquin by itself is not responsible for the heavy rain threat. We can thank the upper level low that will spin away across the Southeast for that. It will help bring moisture in from the Atlantic. As the low spins away and is cut-off, it will likely remain stationary. It means that moisture will continue to push from west to east off the Atlantic and train over the same spots Friday into Saturday.

Several models show this fetch of rain developing somewhere across South Carolina. The influence of the cut-off low could drag some of the moisture from Joaquin into the U.S. Southeast. 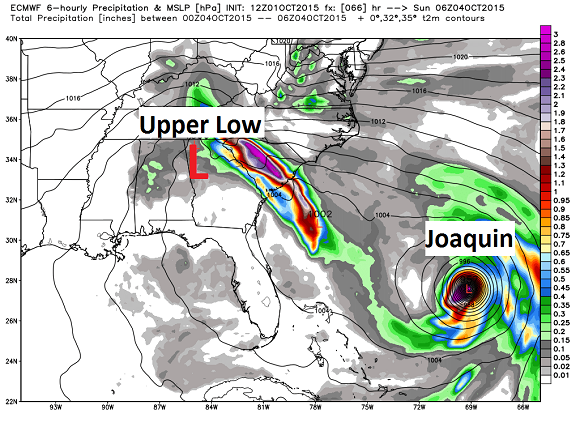 Brad Panovich, NBC Chief Meteorologist in Charlotte, North Carolina describes in his blog that this could be a potentially extreme weather event for South Carolina and North Carolina. When moisture all converges into a particular spot, it becomes worrisome. The influence of the Appalachian Mountains could also enhance rainfall as it acts as a lifting mechanism for more rain development. Panovich posted 3-day rainfall records Greenville, Asheville, and Charlotte. Several of the model projections that I have seen could rival or break the old records. 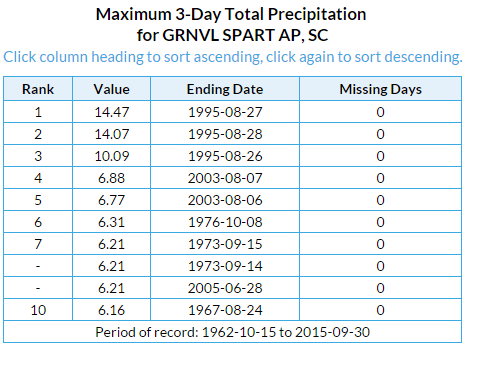 The National Weather Service out of Greenville/Spartanburg wrote in its weather discussion:

THE INGREDIENTS ARE IN PLACE FOR A RAINFALL EVENT OF HISTORIC PROPORTIONS ACROSS THE AREA. IN COMPARISON…WITH FAY IN 2008 WE HAD WIDESPREAD 6 OR SO INCHES WITH HIGHER AMOUNTS…IN 1995 WE HAD UP
TO 20 INCHES WITH JERRY.

The National Weather Service in Charleston, South Carolina warns that this storm could be historic with life threatening flash flooding possible:

FRIDAY THROUGH SUNDAY…FOR THE UPCOMING LATE WEEK AND WEEKEND FORECAST CONFIDENCE IS GROWING FOR A POTENTIALLY MAJOR AND HISTORIC HEAVY RAINFALL EVENT. THERE IS STILL SOME UNCERTAINTY REGARDING EXACTLY WHERE THE BAND OF HEAVIEST RAINFALL WILL SET UP…BUT RESIDENTS ACROSS THE FORECAST AREA…ESPECIALLY SOUTHEAST SOUTH CAROLINA…SHOULD PREPARE FOR EXTREMELY HEAVY RAINFALL AND POSSIBLY WIDESPREAD MAJOR FLOODING. 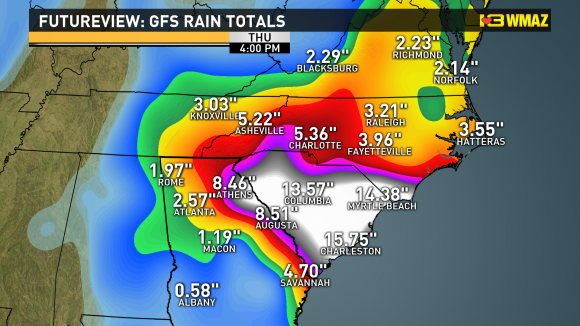 The image below is the official rainfall forecast through next Wednesday across parts of the Southeast and Mid-Atlantic. They are forecasting nearly 20 inches of rain near the Appalachian mountains. 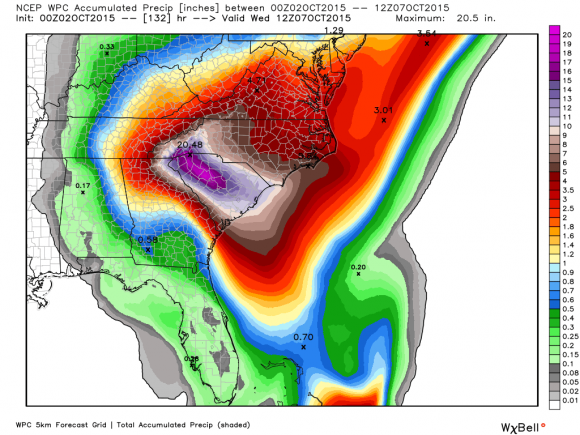 Forecast rainfall totals for the next seven days from NOAA. Image Credit: Weatherbell

This is a big college football weekend across the affected area. Clemson is hosting Notre Dame for a big game Saturday night at 8 p.m. EDT. Will the show go on? How about the big match-up between the Georgia Bulldogs and the Alabama Crimson Tide? If the band of rain pushes further west, Athens could see heavy rain during the football game which is set to kickoff at 3:30 p.m. EDT on CBS. These are two highly anticipated games for this weekend. The Clemson game concerns me the most in regards to fans travelling to and from the game. Flooding is a major concern. Remember that you should never drive through flooded roads. You never know how deep they could be or if the road is washed out under them. Turn around, don’t drown! If you plan on attending these games, grab the ponchos and rain gear. It’ll be chilly, breezy, and very wet.

ORIGINAL ARTICLE – POSTED OCTOBER 1, 2015. Yesterday, Joaquin became the third hurricane (10th named storm) of the 2015 Atlantic hurricane season. As of 5 a.m. EDT (9 UTC) today (October 1, 2015), Hurricane Joaquin is producing winds near 120 mph (195 km/h), with higher gusts, as it batters the central Bahamas. The National Hurricane Center is forecasting Joaquin to grow into a Category 4 storm with sustained winds of 140 mph. No one knows yet exactly where this storm will go. Determining where and how much rain will fall is the biggest question in this forecast. Even if Joaquin does not impact the United States directly, the overall weather pattern is set to produce extreme rainfall rates and flooding.

The uncertainty stems from a trough of low pressure that is pushing into the U.S. Southeast. Over the next couple of days, an upper-level low will break apart from the trough and spin across this region. As it does so, it will likely help grab Joaquin to push further west into the Mid-Atlantia/Carolinas. However, the European model continues to show the storm to push out into the Atlantic Ocean close to Bermuda.

Which model will be victorious this time? Regardless of where Joaquin will travel, heavy rain will remain a huge issue all along the U.S. East Coast this weekend. With the combination of an upper-level low, a stalled front, and plenty of moisture across the area, rain will occur regardless as long as Joaquin is in the mix.

As of September 30, we had already seen significant rains across the U.S. East Coast thanks to a cold front pushing into the region. While several parts of the Northeast are in a drought, this first round of rain has already allowed the soils to become saturated.

Now, we wait for even more rainfall to develop. Saturated grounds with more rain on top of it will likely result in flooding.

With so much uncertainty, it’s important to note that all areas from South Carolina northwards into the U.S. Northeast are all in line to see heavy rain, flooding, and gusty winds. With heavy rain likely, soils will become saturated. It will not take a lot of wind to knock over trees and power lines. Along the coast, rip currents and beach erosion will be a threat.

You still have plenty of time to prepare before this event takes place this weekend. Do you have a safety kit ready? Do you have extra food and water around in case the power goes out? Remember to turn down your freezer and refrigerator to the coldest settings possible. If you lose electricity, your perishable foods will last longer.

NOAA is taking this storm seriously. All National Weather Service offices east of the Mississippi River are launching weather balloons four times a day versus twice a day. It allows us to better sample the atmosphere and hopefully get better solutions from weather models on what will happen. The National Hurricane Center has put some valuable information concerning the forecast for Joaquin. In their discussion on September 30, they wrote:

KEY MESSAGES AS OF SEPTEMBER 30:

1. Preparations to protect life and property within the warning areas in the Bahamas should be rushed to completion.

2. A significant adjustment to the forecast has been made this afternoon, and this shows an increased threat to the mid-Atlantic states and the Carolinas. However, confidence in the details of the forecast after 72 hours remains low, since we have one normally excellent model that keeps Joaquin far away from the United States east coast. The range of possible outcomes is still large, and includes the possibility of a major hurricane landfall in the Carolinas.

3. Every effort is being made to provide the forecast models with as much data as possible. The NOAA G-IV jet has begun a series of missions in the storm environment, and the National Weather Service is launching extra balloon soundings.

4. Because landfall, if it occurs, is still more than three days away, it is too early to talk about specific wind, rain, or surge impacts from Joaquin in the United States. Even if Joaquin stays well out to sea, strong onshore winds will create minor to moderate coastal flooding along the coasts of the mid-Atlantic and northeastern states through the weekend.

5. A hurricane watch for a portion of the U.S. coast could be required as early as Thursday evening.

6. Many areas of the eastern U.S. are currently experiencing heavy rains and gusty winds associated with a frontal system. This inclement weather is expected to continue over the next few days, which could complicate preparations for Joaquin should it head toward the coast, and greatly exacerbate the impacts from the hurricane. Heavy rains are likely to continue over these areas even if the center of Joaquin stays out to sea. 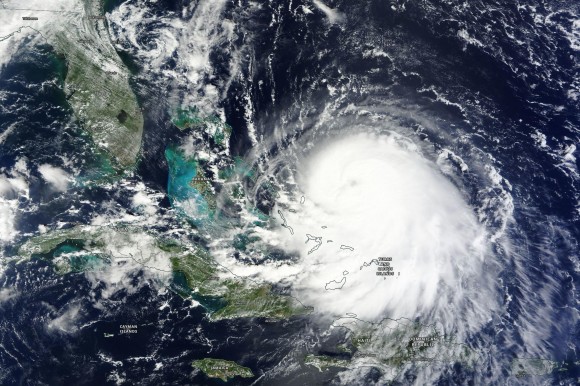 Bottom line: As of October 2, 2015, a significant flooding event appears increasingly likely in parts of the U.S. Southeast and Mid-Atlantic, due to Hurricane Joaquin. The hurricane is severely battering the Bahamas; however, it appears it will not make landfall in the U.S.