It’s below the magma chamber they knew about before and contains enough hot, partly molten rock to fill the Grand Canyon 11 times over.

University of Utah seismologists have discovered a reservoir of hot, partly molten rock 12 to 28 miles beneath the Yellowstone supervolcano that is 4.4 times larger than the shallower, long-known magma chamber.

Yellowstone is among the world’s largest supervolcanoes, with frequent earthquakes and Earth’s most vigorous continental geothermal system.

What do you know about the Yellowstone supervolcano?

The hot rock in the newly-discovered, deeper magma reservoir would fill the 1,000-cubic-mile Grand Canyon 11.2 times, while the previously known magma chamber would fill the Grand Canyon 2.5 times, says postdoctoral researcher Jamie Farrell, a co-author of the study published online April 23, 2015 in the journal Science.

The researchers emphasize that Yellowstone’s plumbing system is no larger – nor closer to erupting – than before, only that they now have used advanced techniques to make a complete image of the system that carries hot and partly molten rock upward from the top of the Yellowstone hotspot plume – about 40 miles beneath the surface – to the magma reservoir and the magma chamber above it. Farrell said:

The magma chamber and reservoir are not getting any bigger than they have been, it’s just that we can see them better now using new techniques. 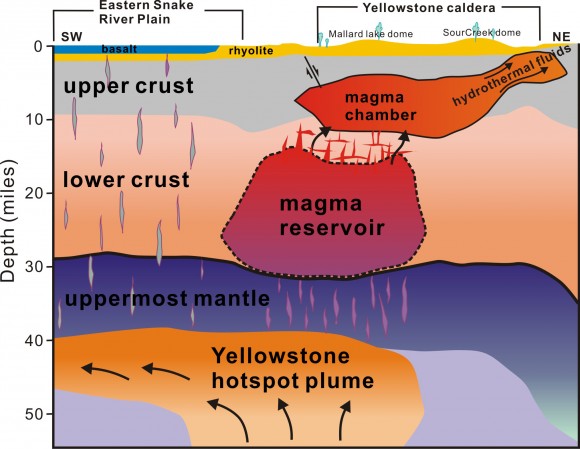 The plumbing system that supplies hot and partly molten rock from the Yellowstone hotspot to the Yellowstone supervolcano. This cross-section illustration cutting southwest-northeast under Yelowstone depicts the view revealed by seismic imaging. Image credit: Hsin-Hua Huang, University of Utah

The researchers point out that the previously known upper magma chamber was the immediate source of three cataclysmic eruptions of the Yellowstone caldera 2 million, 1.2 million and 640,000 years ago, and that isn’t changed by discovery of the underlying magma reservoir that supplies the magma chamber.

Study co-author Robert B. Smith is a research and emeritus professor of geology and geophysics at the University of Utah. Smith said:

The actual hazard is the same, but now we have a much better understanding of the complete crustal magma system. 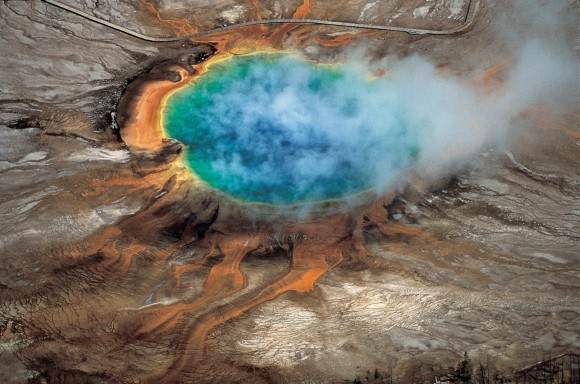 The gorgeous colors of Yellowstone National Park’s Grand Prismatic hot spring are among the park’s myriad hydrothermal features created by the fact that Yellowstone is a supervolcano – the largest type of volcano on Earth. Photo credit: “Windows into the Earth,” Robert B. Smith and Lee J. Siegel

The three ancient Yellowstone supervolcano eruptions were only the latest in a series of more than 140 that happened as the North American plate of Earth’s crust and upper mantle moved southwest over the Yellowstone hotspot, starting 17 million years ago at the Oregon-Idaho-Nevada border. The hotspot eruptions progressed northeast before reaching Yellowstone 2 million years ago.

Hsin-Hua Huang, a postdoctoral researcher in geology and geophysics, is the paper’s first author. Huang said:

For the first time, we have imaged the continuous volcanic plumbing system under Yellowstone. That includes the upper crustal magma chamber we have seen previously plus a lower crustal magma reservoir that has never been imaged before and that connects the upper chamber to the Yellowstone hotspot plume below.

As with past studies that made images of Yellowstone’s volcanic plumbing, the new study used seismic imaging, which is somewhat like a medical CT scan but uses earthquake waves instead of X-rays to distinguish rock of various densities. Quake waves go faster through cold rock, and slower through hot and molten rock.

For the new study, Huang developed a technique to combine two kinds of seismic information: Data from local quakes detected in Utah, Idaho, the Teton Range and Yellowstone by the University of Utah Seismograph Stations and data from more distant quakes detected by the National Science Foundation-funded EarthScope array of seismometers, which was used to map the underground structure of the lower 48 states.

Bottom line: University of Utah seismologists have discovered a reservoir of hot, partly molten rock 12 to 28 miles beneath the Yellowstone supervolcano that is 4.4 times larger than the shallower, long-known magma chamber. The hot rock in the newly discovered magma reservoir would fill the 1,000-cubic-mile Grand Canyon 11.2 times, say the researchers. The study was published online April 23, 2015 in the journal Science.

Read more from the University of Utah