Most of Earth’s oxygen comes from tiny ocean plants – called phytoplankton – that live near the water’s surface and drift with the currents. 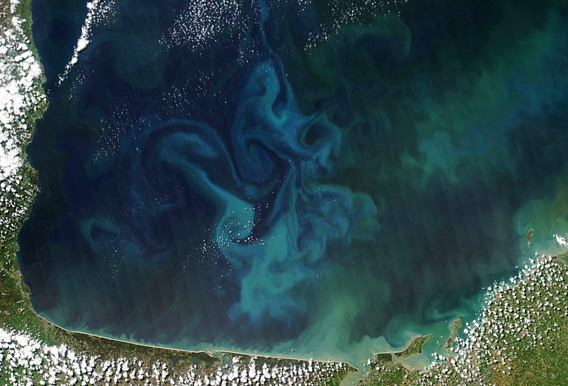 In April, 2013, NASA’s Aqua satellite captured this true-color image of the dynamic growth of a springtime phytoplankton bloom in the Bay of Biscay, off the coast of France. Read more about this image here.

Scientists agree that there’s oxygen from ocean plants in every breath we take. Most of this oxygen comes from tiny ocean plants – called phytoplankton – that live near the water’s surface and drift with the currents. Like all plants, they photosynthesize – that is, they use sunlight and carbon dioxide to make food. A byproduct of photosynthesis is oxygen.

Scientists believe that phytoplankton contribute between 50 to 85 percent of the oxygen in Earth’s atmosphere. They aren’t sure because it’s a tough thing to calculate. In the lab, scientists can determine how much oxygen is produced by a single phytoplankton cell. The hard part is figuring out the total number of these microscopic plants throughout Earth’s oceans. Phytoplankton wax and wane with the seasons. Phytoplankton blooms happen in spring when there’s more available light and nutrients. 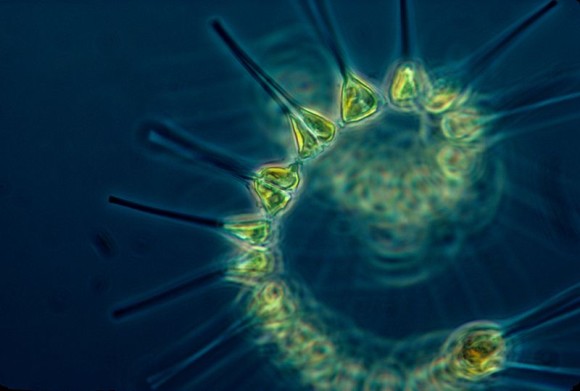 Phytoplankton – the foundation of the oceanic food chain. Scientists estimate that phytoplankton contribute between 50 to 85 percent of the oxygen in Earth’s atmosphere. Image via NOAA

And the density of phytoplankton varies. They sometimes float just at the surface. At other times and places they can be a hundred meters – about 100 yards – thick.