June through August 2014 is the warmest period recorded since record keeping began in 1880, NOAA says. Also, the warmest August since 1880.

The results are in for NOAA, and they show that the combined average temperature for global land and ocean surfaces for August 2014 was a record high, beating out the old record set back in 1998. The June through August global land and ocean surface temperatures were 0.71°C (1.28°F) higher than the 20th century average, making it the warmest such period since record keeping began in 1880. Have you heard the argument that the past 15 years we haven’t seen much warming? Those using that argument are – knowingly or unknowingly – dating it back to the extremely warm year of 1998, when an unusually strong El Niño formed. While we haven’t seen as big of a spike in heating as in 1998, the globe continues to warm and records continue to be broken. Just because parts of the Eastern United States saw relatively cool temperatures does not mean the entire Earth was seeing cooler temperatures. This record was broken after NASA, NOAA, and the Japan Meteorological Agency found that August 2014 was the warmest August ever recorded.

June through August 2014 temperature departures across the globe. It is the warmest June-August since record keeping began in 1880. Image via NOAA/NCDC

August 2014 officially becomes the warmest August ever recorded since 1880, breaking the old record set back in 1998. As mentioned above, 1998 was one of the warmest years ever recorded thanks to the additional heat in the Eastern Pacific brought on by a strong El Niño.

August 2014 temperature departures across the globe. It is the warmest August since record keeping began in 1880. Image via NOAA/NCDC

While it might have been a cool August for you, that was not the case for everyone across the globe. Some of the warmest locations in August 2014 occurred in western Asia, western Australia, and into southern parts of South America. Meanwhile, other spots across the globe experienced cooler than average temperatures including the eastern United States, western Europe, and central Australia.

Remember … climate measures on a global scale take into account whole continents and oceans, not just particular towns and cities.

According to the NCDC, 2014 is on track to become the warmest year ever recorded:

The first eight months of 2014 (January–August) were the third-warmest such period on record across the world’s land and ocean surfaces, with an average temperature that was 0.68°C (1.22°F) above the 20th century average of 57.3°F (14.0°C). If 2014 maintains this temperature departure from average for the remainder of the year, it will be the warmest year on record. 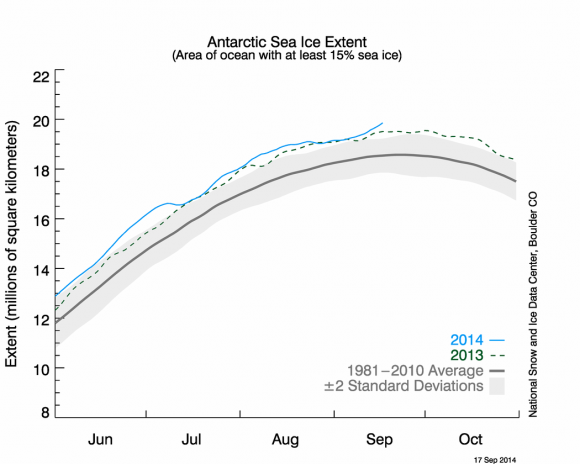 Antarctica’s sea ice extent was the largest ever recorded during the satellite era in 2014. Image via NOAA/NCDC

Bottom line: August 2014 was globally the warmest August ever recorded since record keeping began in 1880. It makes the June through August period the warmest such period on record. All of this information was released by NOAA through the National Climatic Data Center (NCDC). Meanwhile, sea ice extent globally is above-average for the month of August, most in part due to the record sea ice extent that has occurred in Antarctica. If temperatures continue to stay warm globally on land and ocean surfaces, 2014 could be close to becoming the warmest year ever recorded.