What made this giant spinning ice circle?

Crop circles step aside! A giant ice disk has been found on the Presumpscot River in Maine. The fascinating phenomenon is attracting thousands of onlookers, including ducks. 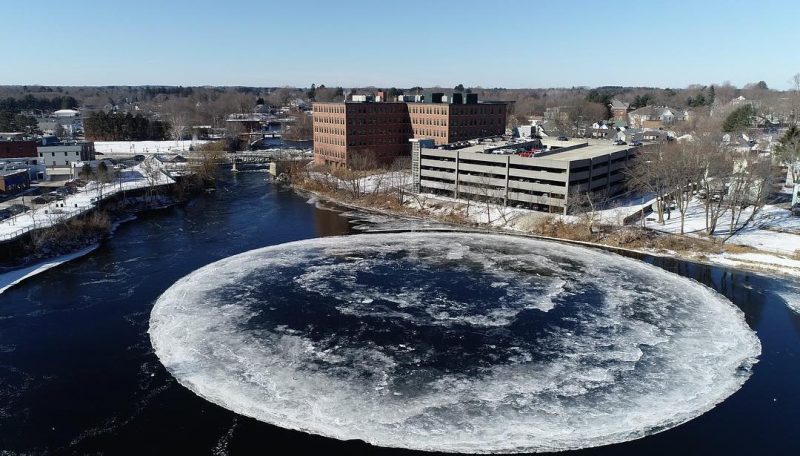 The giant ice disk on Presumpscot River in Westbrook, Maine. Image via Tina Radel/City of Westbrook.

You have probably heard of crop circles, but did you know there are ice circles too? Every so often, ice circles – or actually ice disks – are reported. They seem quite bizarre, although they are known to form naturally – no aliens needed.

Now, a new one has been found on the Presumpscot River in Westbrook, Maine. The “spinning” (actually slowly rotating) disk is huge – about 300 feet (100 meters) in size – making it one of the largest, if not the largest, one on record. The phenomenon was first reported on January 16 and has attracted thousands of onlookers. As one witness exclaimed:

It’s the moon in the river. Pretty cool!

According to city councilor Gary Rairdon:

I have not seen anything like this. I’ve lived probably 52 years of my life in Westbrook. It’s almost like Mother Nature’s merry-go-round. 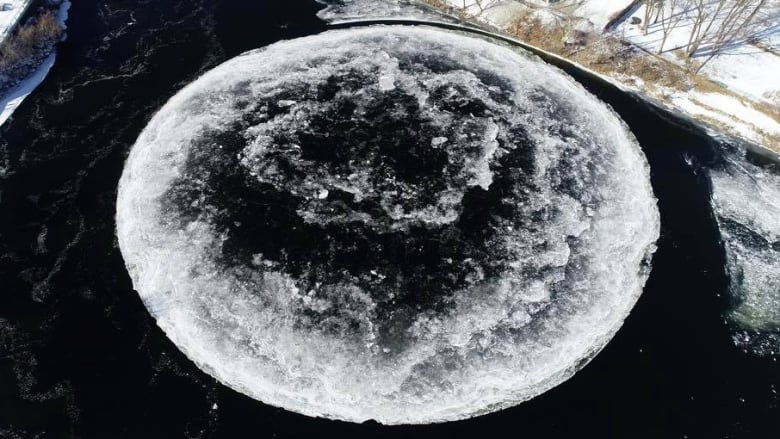 A closer view of the giant ice disk on Presumpscot River in Westbrook, Maine. Image via Tina Radel/City of Westbrook.

Below is a time-lapse video showing the rotation of the ice disk (via Doug Bertlesman):

The first photos of the ice disk were taken by a drone and now have attracted world-wide interest and curiosity. The rough surface of the disk does sort of make it look like the moon, as an aesthetic bonus.

As Mark Battle, an associate physics professor at the nearby Bowdoin College, told As It Happens (CBC) host Carol Off:

It’s a beautiful, spectacular thing. It’s just a beautiful aesthetic phenomenon. It’s not unprecedented, but it does seem to be unusually large. There was a modest crowd and a steady flux of people coming and going, taking pictures and just enjoying the whole thing. It had a nice community feel to it.

But how did this ice disk – and others like it – form?

It’s actually a rather well-known natural phenomenon, usually found in spots where there is a circular current in a river or stream that creates a whirlpool effect. Random eddies in water tend to follow a circular route. In winter, ice crystals in this slower-moving water can gradually coalesce to form a circular “mat” of ice. The current keeps the ice disk in place as it slowly rotates. As the disk turns, it bumps up against the shoreline or other chunks of ice and is essentially “lathed down” until it is round. The result is an ice disk that can be surprisingly circular and smooth-edged.

As Ryan Breton, a meteorologist at News Center in Maine, added: 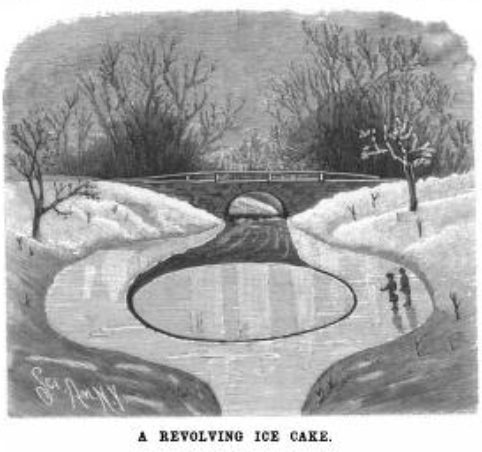 Illustration of a historical account of an ice disk – on the Mianus River near Bedford, N.Y. in 1895. Image via Scientific American.

The ice disk has even become popular with the local ducks, said Rob Mitchell, who owns a nearby office building:

There were ducks sitting on it. The ducks were rotating on this big Lazy Susan. It was a big duck-go-round.

Similar ice disks have been seen before, although typically smaller than this new one in Maine. Most are usually around 30 feet or so in diameter, as compared to this 300-foot monster. There is even an article in an 1895 Scientific American that quotes a reader who described “a revolving ice cake” on the Mianus River near Bedford, N.Y.

Bottom line: The Maine ice disk is an exquisite example of how nature can produce phenomena that at first glance almost seem other-worldly – and can leave the imagination spinning.