Scientists have discovered a person-sized sea scorpion that lived 467 million years ago. 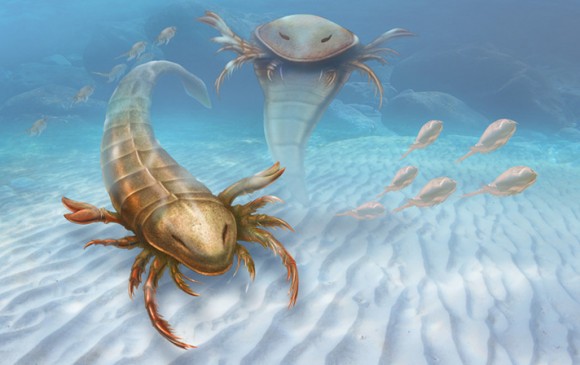 Scientists have discovered what they say is the oldest described eurypterid — a person-sized sea scorpion that lived 467 million years ago.

Eurypterids are a group of aquatic arthropods that are ancestors of modern spiders, lobsters, and ticks.

Pentecopterus, so named because of its sleek features that resemble a penteconter, one of the first Greek galley ships, had a long head shield, a narrow body, and large, grasping limbs for trapping prey. Pentecopterus could grow to nearly six feet, the researchers say.

James Lamsdell is a postdoctoral associate at Yale University and lead author of the study, which appears in the September 1 online edition of BMC Evolutionary Biology. Lamsdell said:

Pentecopterus is large and predatory, and eurypterids must have been important predators in these early Palaeozoic ecosystems.

Geologists with the Iowa Geological Survey at the University of Iowa discovered the fossil bed in a meteorite crater by the Upper Iowa River in northeastern Iowa. Fossils were then unearthed and collected by temporarily damming the river in 2010.

The fossil-rich site – called the Winneshiek site – yielded both adult and juvenile Pentecopterus specimens, giving the researchers a wealth of data about the animal’s development. The specimens were also exceptionally well preserved. Lamsdell said:

This shows that eurypterids evolved some 10 million years earlier than we thought, and the relationship of the new animal to other eurypterids shows that they must have been very diverse during this early time of their evolution, even though they are very rare in the fossil record.

Huaibao Liu of the Iowa Geological Survey and the University of Iowa, who led the fossil dig and is a coauthor of the paper, spoke about the findings at the Winnesheik site.

What’s amazing is the Winneshiek fauna comprise many new taxa, including Pentecopterus, which lived in a shallow marine environment, likely in brackish water with low salinity that was inhospitable to typical marine taxa.

The undisturbed, oxygen-poor bottom waters within the meteorite crater led to the fossils’ remarkable preservation. So this discovery opens a new picture of the Ordovician community that is significantly different from normal marine faunas.

Bottom line: A study in the September 1, 2015 online edition of BMC Evolutionary Biology describes a person-sized sea scorpion that lived 467 million years ago. Researchers say Pentecopterus is the oldest described eurypterid — a group of aquatic arthropods that are ancestors of modern spiders, lobsters, and ticks.