Red tides and a blue-green algae outbreak are fouling hundreds of miles of coast, killing fish and driving tourists from beaches. Some causes are natural, but human actions also play a role. 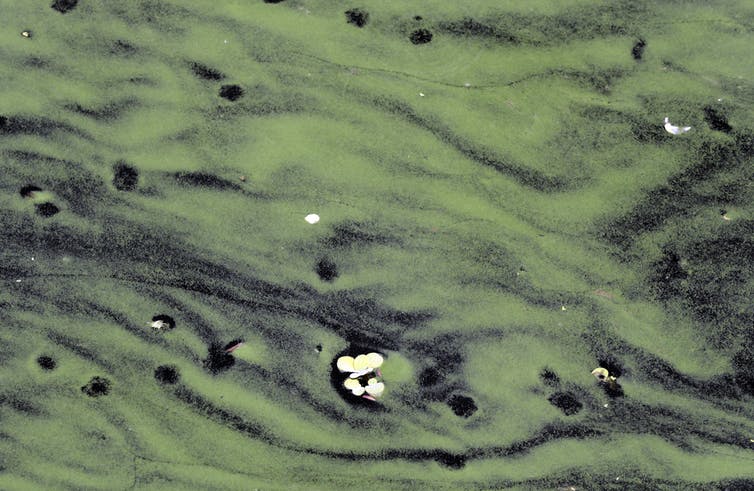 Algae covers the surface of the Caloosahatchee River at the W.P. Franklin Lock and Dam, July 12, 2018, in Alva, Florida. Photo via AP Photo/Lynne Sladky.

By Karl Havens, University of Florida

Editor’s note: Two large-scale algae outbreaks in Florida are killing fish and threatening public health. Along the southwest coast, one of the longest-lasting red tide outbreaks in the state’s history is affecting more than 100 miles of beaches. Meanwhile, discharges of polluted fresh water from Lake Okeechobee and polluted local runoff water from the St. Lucie and Caloosahatchee watersheds have caused blooms of blue-green algae in downstream estuaries on both coasts. Karl Havens, a professor at the University of Florida and director of the Florida Sea Grant Program, explains what’s driving this two-pronged disaster.

What’s the difference between red tide and blue-green algae?

Both are photosynthetic microscopic organisms that live in water. Blue-green algae are properly called cyanobacteria. Some species of cyanobacteria occur in the ocean, but blooms – extremely high levels that create green surface scums of algae – happen mainly in lakes and rivers, where salinity is low.

Red tides are caused by a type of algae called a dinoflagellate, which also is ubiquitous in lakes, rivers, estuaries and the oceans. But the particular species that causes red tide blooms, which can literally make water look blood red, occur only in saltwater. 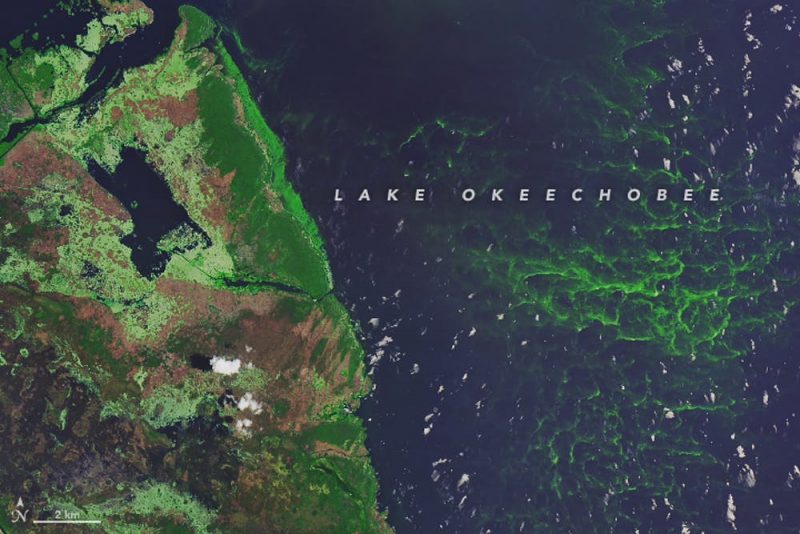 What causes these blooms?

Blooms occur where lakes, rivers or near-shore waters have high concentrations of nutrients – in particular, nitrogen and phosphorus. Some lakes and rivers have naturally high nutrient concentrations. However, in Lake Okeechobee and the St. Lucie and Caloosahatchee estuaries, man-made nutrient pollution from their watersheds is causing the blooms. Very high levels of nitrogen and phosphorus are washing into the water from agricultural lands, leaky septic systems and fertilizer runoff.

Red tides form offshore, and it is not clear whether or to what extent they have become more frequent. When ocean currents carry a red tide to the shore it can intensify, especially where there are abundant nutrients to fuel algae growth. This year, after heavy spring rains and because of discharges of water from Lake Okeechobee, river runoff in southwest Florida brought a large amount of nutrients into near-shore waters of the Gulf of Mexico, which fueled the large red tide. 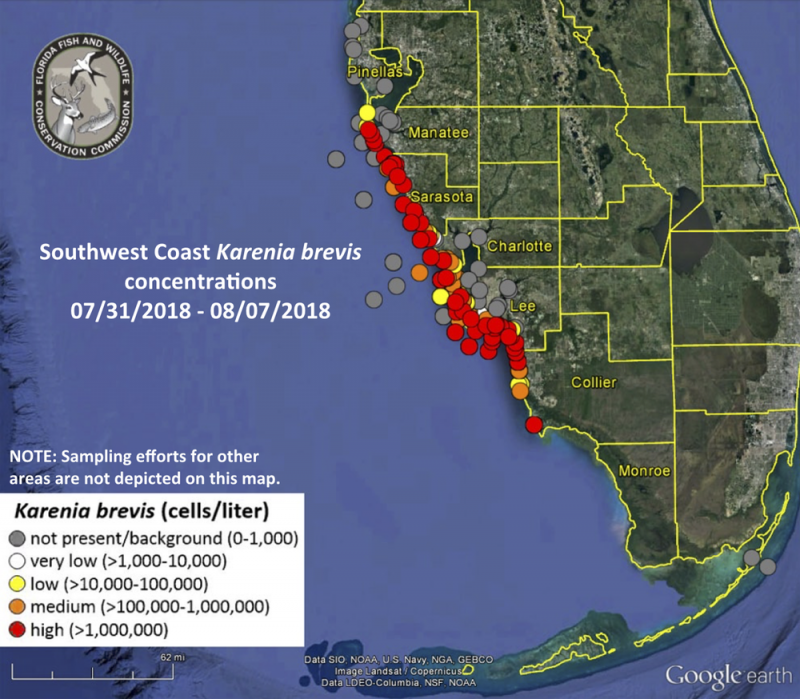 How dangerous are red tides for humans and the environment?

The red tide has killed thousands of fish and other aquatic life, and state agencies have issued public health advisories in connection with both blooms.

The public health advisories about red tide are related to respiratory irritation, which is a particular concern for people with asthma or other respiratory issues. But almost anyone, including me, who has walked a beach where there is a red tide will quickly experience watering eyes, a runny nose and a scratchy throat. The algae that cause the red tide release a toxic chemical into the water that is easily transported into the air where waves break on the shore.

Some people are allergic to cyanobacteria blooms and can have contact dermatitis (skin rash) on exposure. Several of my colleagues have developed rashes after submerging their hands to collect water samples. It is not advisable to purposely contact water with a cyanobacteria bloom. And if farm animals or pets drink water with an intense bloom, they can become seriously ill or die.

How can states prepare for these events?

The onset of algae blooms is unpredictable. We know high levels of nutrients allow a lake or shoreline to have blooms. We even can predict with some certainty that a bloom is likely in a particular summer – for example, if in the preceding spring heavy rainfall and runoff from the land delivered large amounts of nitrogen and phosphorus into the water.

But we can’t predict exactly when a bloom will begin and end, because that depends on things we can’t project. Why did the cyanobacteria bloom start in Lake Okeechobee this summer? Perhaps because there were several successive hot sunny days with little cloud cover and little wind. For some lakes in Florida and many others across the nation, we have loaded the surrounding land with so much phosphorus and nitrogen from agricultural and urban runoff that all it takes is the right weather to trigger a bloom: A rainy spring and then a few perfect sunny days in summer.

We cannot control the weather, but we can control nutrient pollution, both by reducing it at its sources and by capturing and treating water running off of large land areas. Florida has many such projects under way as part of the greater Everglades restoration efforts, but they will take decades to complete. 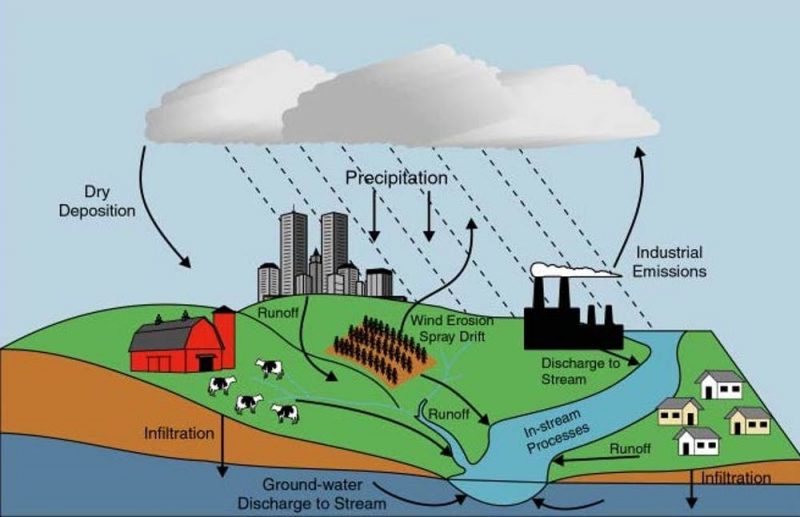 One key aspect of rehabilitating polluted lakes, rivers and estuaries is knowing whether actions are having a positive effect. This requires long-term environmental monitoring programs, which unfortunately have been scaled back in Florida and many other states due to budget cuts.

Carefully designed monitoring could help us understand factors affecting the kind of blooms that occur and what triggers them to start and stop at particular times, and provide guidance on nutrient control strategies. We are not monitoring at that level now in Florida.

Is climate change influencing the size or frequency of these outbreaks?

Scientists have clearly shown that there is a positive and synergistic relationship between water temperature, nutrients and algal blooms. In a warmer future, with the same level of nutrient pollution, blooms will become harder if not impossible to control. This means that it is urgent to control nutrient inputs to lakes, rivers and estuaries now.

Unfortunately, today the federal government is relaxing environmental regulations in the name of fostering increased development and job creation. But conservation and economic growth are not incompatible. In Florida, a healthy economy depends strongly on a healthy environment, including clean surface waters without these harmful blooms.