Tropical Storm Alberto developed in the western Atlantic, off the South Carolina coast, yesterday. It’ll probably head out to sea.

The first named storm for the 2012 Atlantic hurricane season has formed across the western Atlantic Ocean. Tropical Storm Alberto developed during the afternoon hours of Saturday, May 19, 2012. The 5 p.m. EDT advisory reported a tropical storm with sustained winds of 45 miles per hour and a barometric pressure of 1007 millibars. Two hours later, a special weather advisory was issued around 7 p.m. EDT reporting that a ship recorded a much stronger storms with winds sustained at 60 mph and a barometric pressure of 995 mb. As of now, Alberto is slightly weaker and will likely fluctuate in intensity since the storm is so small and outside forces can greatly impact the system. Alberto should not be a direct threat to land, and will eventually push northeastward out to sea.

Forecast track from the National Hurricane Center on May 20, 2012 at 5 AM EDT. Image Credit: NHC 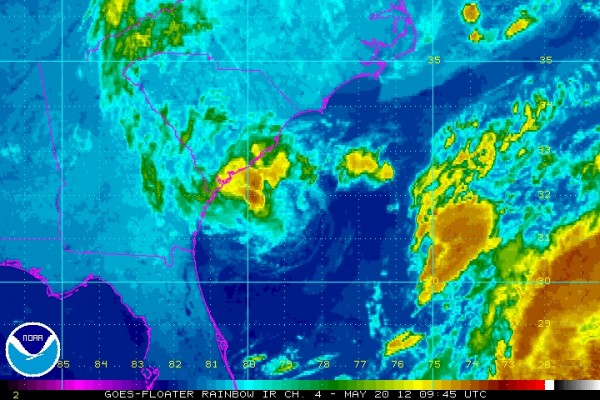 Tropical Storm Alberto should not directly impact land across the eastern coast of the United States. It will likely hover across the South Carolina and North Carolina coastline for the next 48 to 72 hours before it encounters a trough in the eastern United States that will eventually steer the system out into the open waters of the Atlantic Ocean. Tropical storm watches have been issued from the Savannah River to South Santee River, South Carolina. For a tropical system to be rated as a tropical storm, it must have sustained winds of 39 mph or greater. Once a storm reaches sustained winds of 74 mph or greater, the storm is classified as a hurricane. Fortunately, Alberto appears to show very little change in structure or intensity for the past 12-15 hours. Alberto is currently over the warm Gulf loop current (aka the Gulf Stream) that forms in the Gulf of Mexico, moves around Florida, and pushes northeast along the eastern coast of the Atlantic Ocean. Since tropical systems use warmer ocean waters as a source for strengthening, this area should stay monitored. However, there are other outside forces that impending the strength of the system. For instance, there is plenty of dry air to the north of the system. Dry air can interact with a tropical cyclone and prevent it from strengthening can actually allow weakening. Also, wind shear around 20 to 30 knots are evident south of the storm, which is also another factor that weakens tropical cyclones. With that said, the National Hurricane Center forecasts very little change in the strength of Alberto. It is important to note that Alberto is a very small tropical storm, and small systems such as this can fluctuate in intensity fairly fast. There is only a 5-10% probability that Alberto will reach hurricane strength in the next 48 to 72 hours. In my opinion, Alberto does not look very organized at this time, and I highly doubt it will reach hurricane intensity.

The biggest concerns along the coasts of Georgia, South Carolina, and North Carolina will be strong rip currents and rough ocean waters. Everyone is urged to avoid the waters this weekend as Alberto spins in this area for the next 48-72 hours. Squalls from the tropical storm will likely impact parts of the South Carolina coast. Tropical Storm winds are possible this evening, which is why the Tropical Storm Watch has been issued along the coast. As of now, it appears as if all of the heavy precipitation will occur offshore.

Tropical Storm Alberto is a name that many people remember in the southeast, particularly Georgia. Back in 1994, Alberto formed as a weak tropical storm that slowly pushed northward into Alabama and Florida from the Gulf of Mexico. As if moved northward, it eventually stalled and produced heavy rains across Alabama and Georgia. Flooding was a huge problem across these areas, and parts of southern and Central Georgia received rainfall totals around 10 to even 25 inches. The storm ended up costing 500 million dollars in damaged and killed 28 Georgians. Typically when storms produce that much damage and loss of life, the National Hurricane Center retires the system. Unfortunately, this storm was never retired. Alberto 2012 will be nothing like Alberto 1994. The 2012 Alberto will likely remain off shore and eventually be steered out to sea.

Bottom line: Tropical Storm Alberto will likely stay off the coast of South Carolina and only cause rip currents across the eastern coast of the United States. The storm is very disorganized at this time, and I highly doubt it will strengthen into a hurricane. As of now, the intensity forecast is for the system to maintain its strength, slow down in movement, and eventually be picked up by a trough sometime Tuesday that will push the entire storm out to sea. Rainfall rates will be likely low as most of the rainfall will occur offshore. Dry air to the north and wind shear to the south will likely keep this system from truly organizing, even though it is currently over the warm Gulf Stream. All residents should monitor this storm as it continues to spin offshore. EarthSky will keep you up to date on this storm if anything changes. For now, no immediate threats or worries along the Georgia, South Carolina, or North Carolina coasts. If anything, avoid the waters! Rip currents are the biggest threats!