A new report titled “State of the Arctic Coast 2010” documents how Arctic coastlines are retreating by approximately 1 to 2 meters per year due to climate warming and erosion. Warmer temperatures in the Arctic have greatly reduced the extent of sea ice and melted permafrost. Together, these changes on land and sea are creating more frequent and severe storm waves that are battering an increasingly bare coastline.

An international team of more than 30 scientists from 10 countries worked on the 178-page State of the Arctic Coast 2010” report, through the Helmholtz-Zentrum Geesthacht Center for Materials and Coastal Research. It aims to provide a comprehensive picture of the current status of and anticipated changes to valuable coastal regions in the Arctic. Sponsors include include the International Arctic Science Committee (IASC), Land-Ocean Interactions in the Coastal Zone (LOICZ), the International Permafrost Association (IPA) and the Arctic Monitoring and Assessment Programme (AMAP).

In a press release, Dr. Hugues Lantuit from the Alfred Wegener Institute for Polar and Marine Research stated:

When systematic data acquisition began in 2000, detailed information was available for barely 0.5 percent of the Arctic coasts.

Now, scientists have investigated over 25 percent of Arctic coastal areas, which equates to approximately 100,000 kilometers of coastline (over 62,000 miles).

Arctic coasts are rich in biodiversity and provide important ecosystem services such as flood control and the production of food, water, timber, and fuel. Further, Arctic coasts are home to indigenous people in many diverse communities. Most residents in the Arctic live on the coast.

Eroding Arctic coastlines may negatively affect the ecology as well as human communities. Notably, many sea birds that predominately breed in coastal areas stand to lose breeding habitat, ice-dependent Arctic cod populations will likely continue to decline, and more indigenous villages will have to relocate to higher ground. 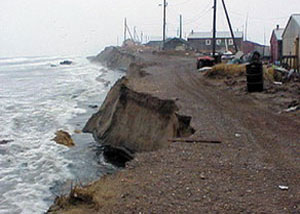 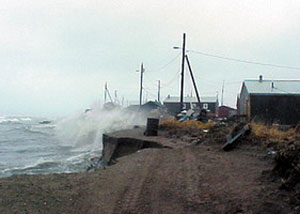 Future Arctic research is urgently needed to study the distribution and stability of gas hydrates. Gas hydrates are ice-like crystals of water with methane and other low molecular weight gases that form within sediments at low temperatures and high pressures. Melting permafrost along coastlines has the potential to release hydrate-bound methane into the atmosphere where it could act as a potent greenhouse gas and accelerate climate warming.

The full “State of the Arctic Coast 2010” report is available at https://www.arcticcoasts.org/.

In summary, “State of the Arctic Coast 2010” represents an important step toward identifying issues relating to the meters-per-year erosion of the Arctic coastline. Global warming has caused sea ice and permafrost to melt. As a result of these changes to the shoreline, storm waves have become higher and more powerful. This climate change-driven erosion destroys wildlife habitat and forces coast-dwelling people to move their villages. The authors hope to continue to update their collaborative coastal assessment of the Arctic in the future.

Freshwater content of the Arctic Ocean increased since 1990s

Thank you! Your submission has been received!
Oops! Something went wrong while submitting the form.
END_OF_DOCUMENT_TOKEN_TO_BE_REPLACED