Three very strong earthquakes in the ocean near New Zealand took place in less than 8 hours on Friday, local time. Tsunami warnings went out across the Pacific, including Hawaii, but have now been lifted. 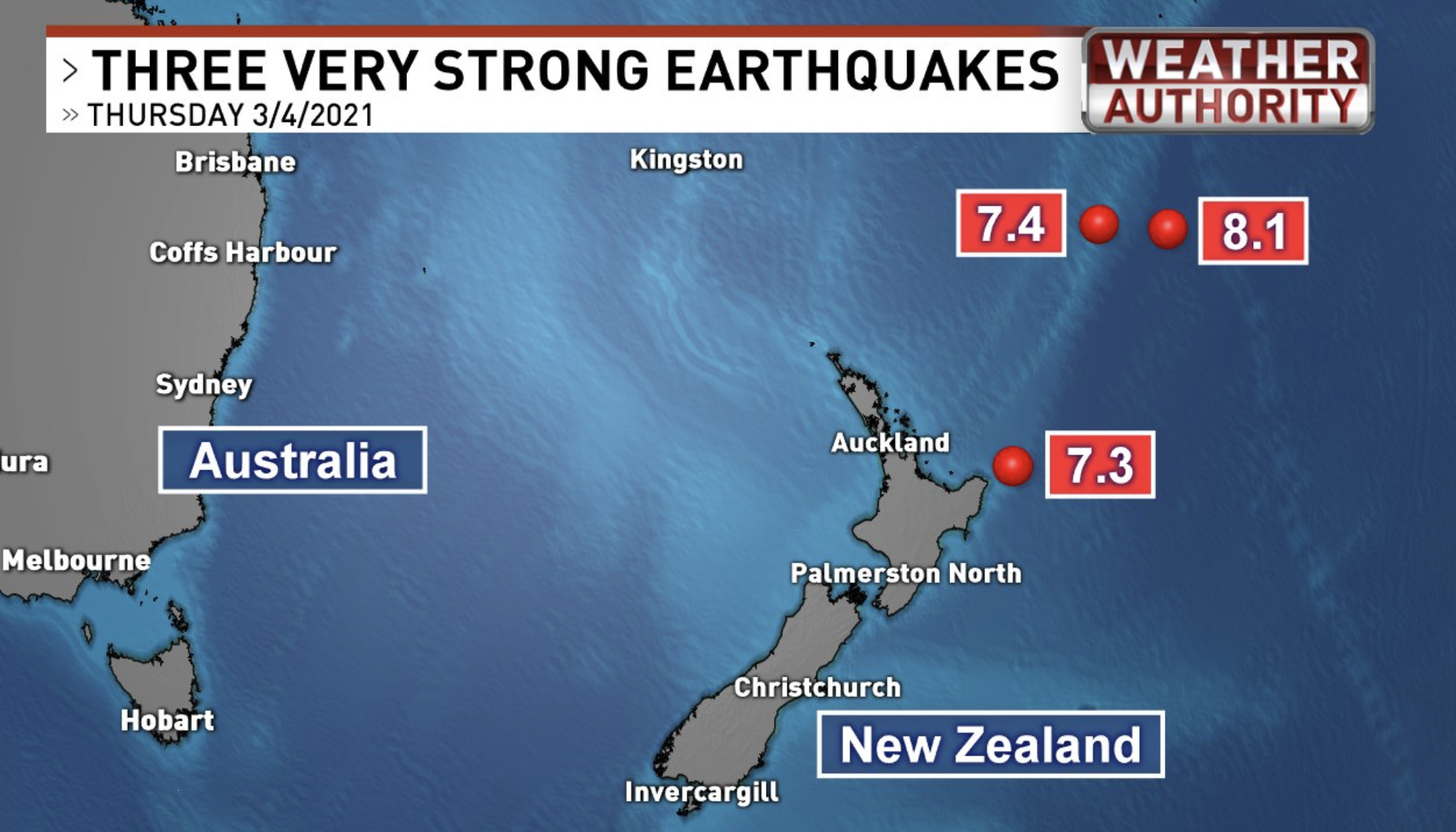 The U.S. Geological Survey (USGS) reported three strong earthquakes near the North Island of New Zealand yesterday – all within less than 8 hours – all with ocean epicenters near one another. The most recent and largest quake took place at around 8 a.m. local time on Friday, March 5, 2021 (March 4 at 19:28 UTC; translate UTC to your time). It was an 8.1 magnitude earthquake whose epicenter lay in the ocean, about 600 miles (965 km) north of New Zealand. It followed two less-strong but still powerful earthquakes – a 7.3 magnitude quake and a 7.4 magnitude quake – in New Zealand. New Zealand’s National Emergency Management Agency issued tsunami warnings, and people were urged to “walk, run or cycle” to higher ground to avoid the chance of being stuck in traffic. Many aftershocks occurred, and the evacuation warnings were not lifted until some hours later. See a firsthand report in the video below, which is from the BBC.

Coastal inundation (flooding of land areas near the shore) is no longer expected as a result of this event. We are advising people to move out of the water, do not go to the coast to watch the unusual wave activity.

The Pacific Tsunami Warning Center also issued a tsunami watch for Hawaii, which was later canceled.

The earthquakes all took place on the Kermadec Fault, which passes east of New Zealand and stretches northward. The Kermadec-Tonga subduction zone is what’s known as a convergent plate boundary. It’s a place on Earth where two land plates are colliding, with one plate being submerged under the other. This process – called subduction – provides a fertile ground for earthquakes and volcanoes. Scientists’ studies have revealed that the eastern boundary of the Tonga Plate is one of the fastest subduction zones in the world, with a rate up to 9.4 inches/year (24 cm/year). The trench formed between the Kermadec-Tonga and Pacific Plates is also home to the second-deepest trench in the world; it is more than 35,000 feet deep (about 10,800 meters). The world’s longest chain of submarine volcanoes also lies in this region. 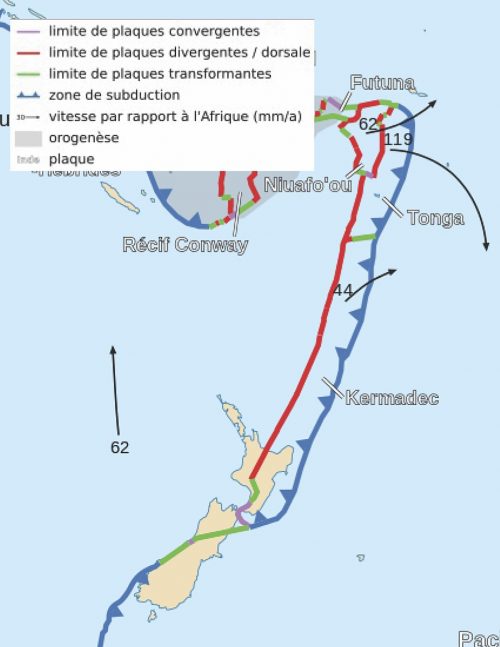 Map of the Kermadec and Tonga Plates with their movement vectors. New Zealand is the tan-colored island at the bottom of this illustration. Image via Wikimedia Commons.

The Washington Post‘s Capitol Weather Gang did its usual great job reporting on this event, including why and how the earthquakes occurred, and we recommend this article by Matthew Cappucci of the Post, who wrote:

It is extremely unusual for three severe earthquakes to occur within a 300-mile radius of a point in less than 8 hours.

The first two earthquakes occurred far enough apart that they likely were not related. It is probable that the second quake was a foreshock to the third, the stress it released triggering another larger slip nearby. A quake is a foreshock to a larger event less than 5% of the time.

Woah what a scary sight! ?

The first images are surfacing of tsunami waves crashing into Tokomaru Bay in New Zealand following this mornings strong earthquake.

Bottom line: Three very strong earthquakes shook New Zealand in less than 8 hours. Tsunami warnings were issued for parts of the Pacific including Hawaii, but have been canceled.

Go to the USGS page for the 8.1-magnitude earthquake

Go to the USGS page for the 7.4-magnitude earthquake

Go to the USGS page for the 7.3-magnitude earthquake