“This achievement is important because it shows, for the first time, that very-high-energy neutrinos can be absorbed by something — in this case, the Earth.” 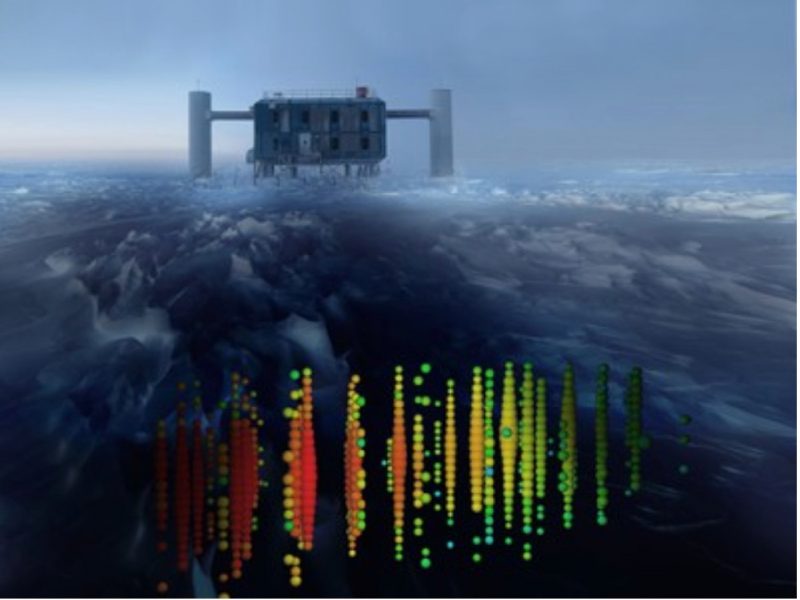 A visual representation of one of the highest-energy neutrino detections, superimposed on a view of the IceCube Lab near Earth’s South Pole. Image via IceCube Collaboration/ Penn State.

It used to be said that neutrinos were massless and would pass through anything. But in recent years, scientists have realized that these strange particles – some of which were formed in the first second of the early universe, and which travel at the speed of light – are only practically massless. And now it’s been proven experimentally, by scientists working with data at the IceCube detector at Earth’s South Pole, that very energetic neutrinos can, in fact, be blocked. Doug Cowen at Penn State University was a collaborator on the study. He said:

This achievement is important because it shows, for the first time, that very-high-energy neutrinos can be absorbed by something — in this case, the Earth.

The results of this recent experiment were published in the online edition of the peer-reviewed journal Nature on November 22, 2017. 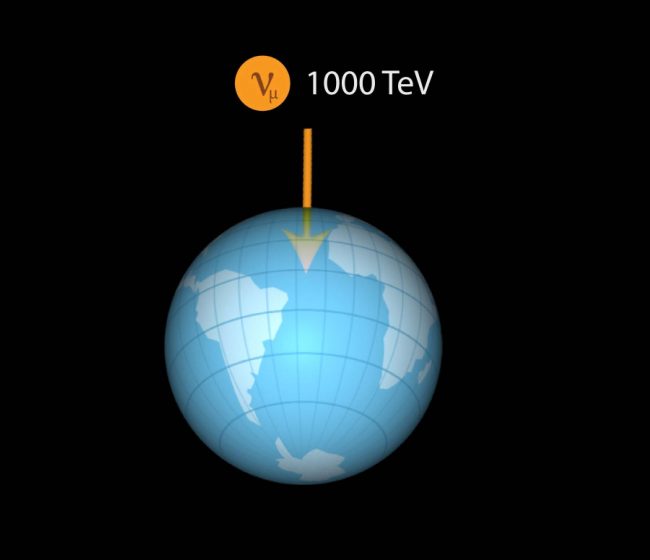 At the highest energies, neutrinos will be absorbed by Earth and will never make it to IceCube. Image via IceCube Collaboration.

The IceCube detector is an array of 5,160 basketball-sized sensors frozen deep within a cubic kilometer of very clear ice near the South Pole. The detector made the first detections of extremely-high-energy neutrinos in 2013, but a mystery remained about whether any kind of matter could truly stop a neutrino’s journey through space. Cowen said:

A statement from these scientists said:

The study … is based on one year of data from about 10,800 neutrino-related interactions, stemming from a natural supply of very energetic neutrinos from space that go through a thick and dense absorber: the Earth. The energy of the neutrinos was critical to the study, as higher energy neutrinos are more likely to interact with matter and be absorbed by the Earth.

Scientists found that there were fewer energetic neutrinos making it all the way through the Earth to the IceCube detector than from less obstructed paths, such as those coming in at near-horizontal trajectories.

The probability of neutrinos being absorbed by the Earth was consistent with expectations from the Standard Model of particle physics, which scientists use to explain the fundamental forces and particles in the universe.

Read more from the IceCube Collaboration. 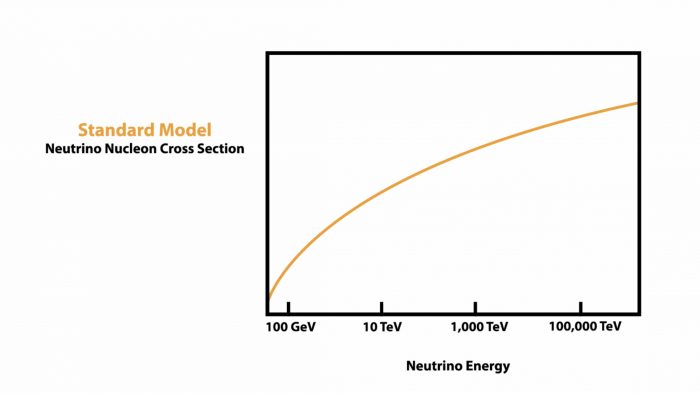 The Standard Model predicts that the probability that a neutrino interacts with matter increases with energy. Thus the recent results from IceCube agrees with the Standard Model, for energies up to 980 TeV. New physics could show up as deviations to this prediction at higher energies. Image via IceCube Collaboration.

Bottom line: It used to be said that neutrinos would “pass through anything.” An experiment near the South Pole reveals how Earth blocks them.