People in south and southwest Florida are seeing hazy skies and unusual sunsets. This is the first large dust storm from Africa to arrive in Florida in 2012.

EarthSky Facebook friends in Florida are reporting hazy skies and strange sunsets due to a cloud of dust from Africa that left the continent earlier this week and traveled across the Atlantic Ocean. The dust arrived in parts of South Florida on July 19, 2012. Its effects will be seen mostly in the southern part of the state, and possibly along the west-central and southwest Florida coast (between Tarpon Springs to the north, and Naples to the south, including the Tampa Bay Area), known to Floridians as the Suncoast, according to Florida Suncoast TV station WWSB.

This is the first large dust storm from Africa to arrive in Florida this year. The satellite imagery below shows the dust leaving Florida on July 16, 2012 and heading out to sea.

Dust from the Saharan Desert leave the African continent and heads out across the Atlantic. According to media in the southern part of Florida, and EarthSky Facebook friends, the dust has now arrived there. Animation via Meteosat-9 satellite. 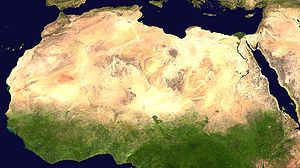 The dust came from North Africa’s Sahara Desert, the world’s third-largest desert. In satellite imagery, you can see large clouds of dust coming off the African coast heading toward Florida. It’s common for dust to blow from westward from Africa, but you need just the right meteorological conditions – a mix of thunderstorm updrafts and upper level winds, according to WWSB – to send the dust into the east to west flow of the Intertropical Convergance Zone (ITCZ), which is the area encircling the earth near the equator where winds originating in the Northern and Southern Hemispheres come together. These winds send the dust hurtling toward Florida.

Another satellite image of dust leaving Africa this week, en route to Florida skies. The dust has created hazy skies and unusual sunsets for Floridians in the southern part of the state and along the Suncoast on the southwestern part of the peninsula.

Florida sunset in Hialeah, a city in Miami-Dade County, Florida, on July 19, 2012. This image and the image at the top of this post are from EarthSky Facebook friend Taimy Iyawosita Obatala. Thank you, Taimy!

Bottom line: Dust from northern Africa’s Sahara Desert arrived in southern and southwestern Florida yesterday (July 19, 2012). Floridians are seeing hazy skies and unusual sunsets. This is the first large dust storm from Africa to arrive in Florida this year.