To look at dinosaur embryos entombed inside 200 million year old fossil eggs, scientists used powerful X-rays to create detailed images. They wanted to see how these embryos compared to those of modern-day dinosaur relatives. 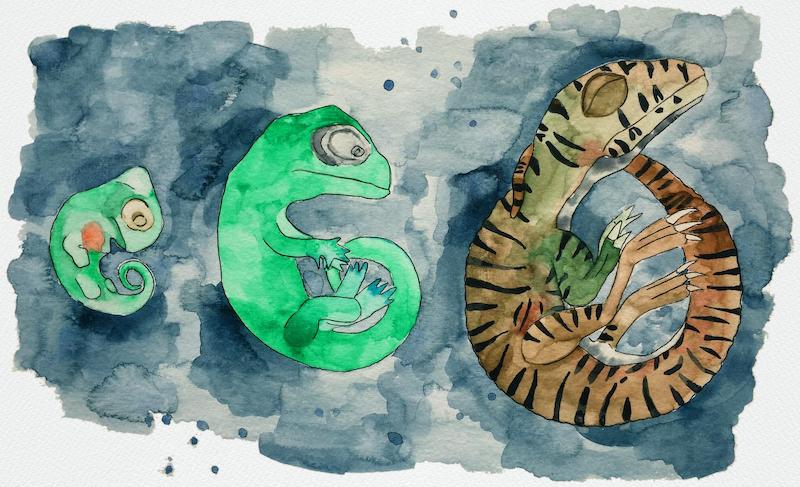 Massospondylus carinatus dinosaur embryos at different stages of the incubation period: 17%, 60%, and 100%, as depicted in this watercolor painting by Mélanie Saratori. Image via Mélanie Saratori/ EurekAlert.

Scientists used powerful X-ray beams to probe the interior of fossil dinosaur eggs, capturing highly detailed images of embryos belonging to Massospondylus carinatus, a herbivorous dinosaur that lived 200 million years ago in South Africa. Images of the skulls, which measured only about an inch (about 2 cm) in length, revealed new details suggesting these dinosaur embryos developed similarly to embryos of their living relatives, for example, chickens and geckos. The findings were published in the peer-reviewed journal Scientific Reports on April 9, 2020.

When it roamed the Earth 200 million years ago, Massospondylus carinatus grew to about 16 feet (5 meters) long. The first fossilized eggs of this creature were discovered at the Golden Gate Highlands National Park, in Free State Province, South Africa.

For several decades afterwards – because the eggs were so very small and extremely fragile – only limited study was possible. 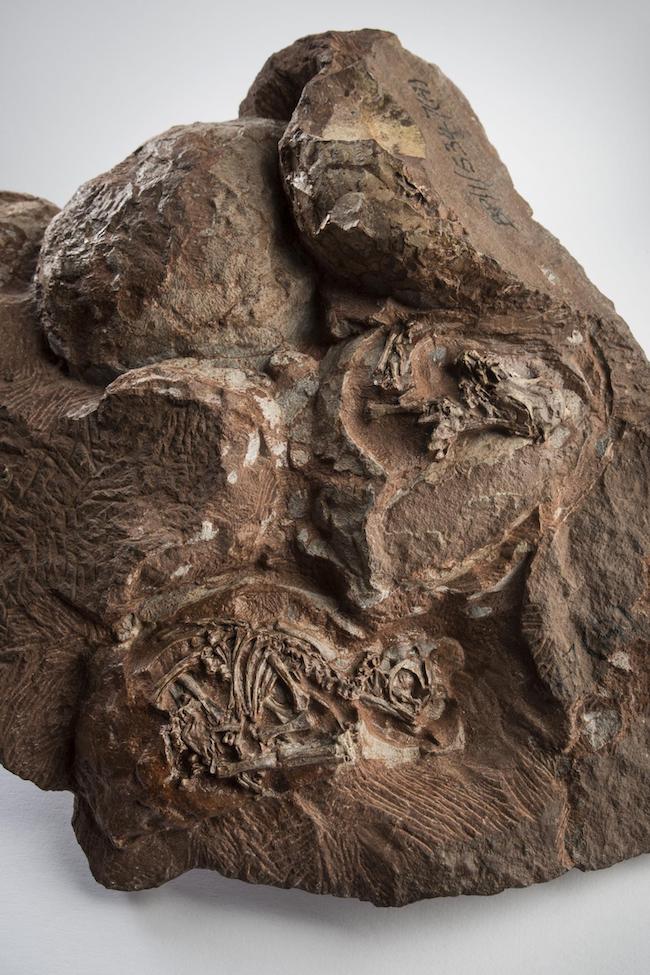 A clutch of Massospondylus carinatus fossil eggs, found in 1976 at the Golden Gate Highland National Park, South Africa. They are among the oldest-known dinosaur eggs and embryos. Image via Brett Eloff. 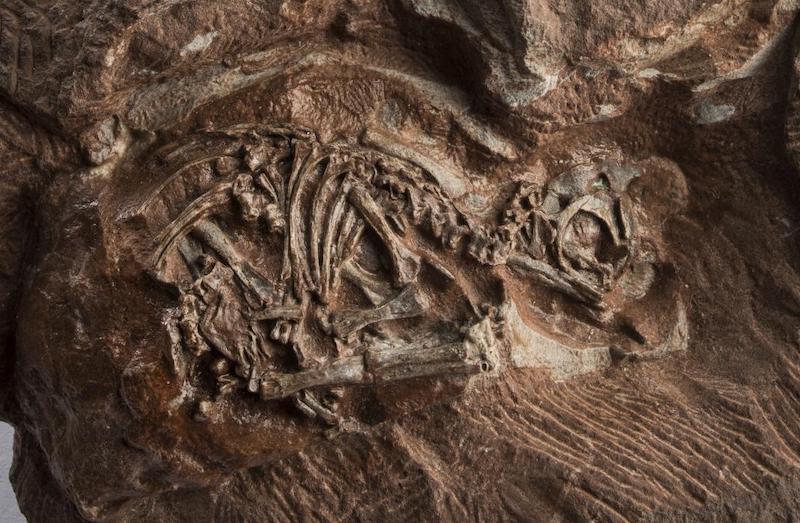 Close-up of a Massospondylus carinatus embryo skeleton from the egg clutch. Image via Brett Eloff/ EurekAlert.

Then, in 2015, scientists at the European Synchrotron Radiation Facility (ESRF) in Grenoble, France, used intensely powerful X-rays to peer inside the fossil eggs. This facility has a synchrotron, a machine that generates what’s known as hard X-rays. There, electrons are propelled to extremely high speeds – close to the speed of light – around a donut-shaped tunnel that’s 2,770 feet (844 meters) in circumference.

When the direction of speeding electrons is changed, powerful X-rays are emitted. These X-ray beams are directed to instruments that use them to study an object of interest.

Using the ESRF synchrotron, the researchers obtained very high resolution images of embryo skeletons inside the fossil eggs, to the level of detail of individual bone cells. Subsequent data processing at the University of the Witwatersrand in Johannesburg, South Africa, resulted in a detailed three-dimensional model of the skull of the Massospondylus embryos. Vincent Fernandez, a scientist at the Natural History Museum in London and a co-author of the paper, said in a statement:

No lab CT scanner in the world can generate these kinds of data. Only with a huge facility like the ESRF can we unlock the hidden potential of our most exciting fossils. This research is a great example of a global collaboration between Europe and the South African National Research Foundation.

Prior to the study, it was thought the embryos had died just before they were due to hatch. However, when the paper’s lead author, Kimi Chapelle at the University of the Witwatersrand, was studying the data, she noticed similarities in the Massospondylus embryo skulls that are also seen in embryos of animals related to dinosaurs such as chickens, turtles, crocodiles, and lizards.

I was really surprised to find that these embryos not only had teeth, but had two types of teeth. The teeth are so tiny; they range from 0.4 to 0.7 mm [2 or 3 hundredths of an inch] wide. That’s smaller than the tip of a toothpick!

It was remarkable to see the similarities between the Massospondylus embryo skulls and those of their extant relatives. Jonah Choiniere, who co-authored the study, remarked:

It’s incredible that in more than 250 million years of reptile evolution, the way the skull develops in the egg remains more or less the same. Goes to show – you don’t mess with a good thing!

The team will continue studying the rest of the embryo skeletons, to compare them with embryos of living relatives of dinosaurs. For instance, in another study, they’ve already found that the arms and legs of Massospondylus embryo skeletons revealed that the hatchlings would have walked on two legs. 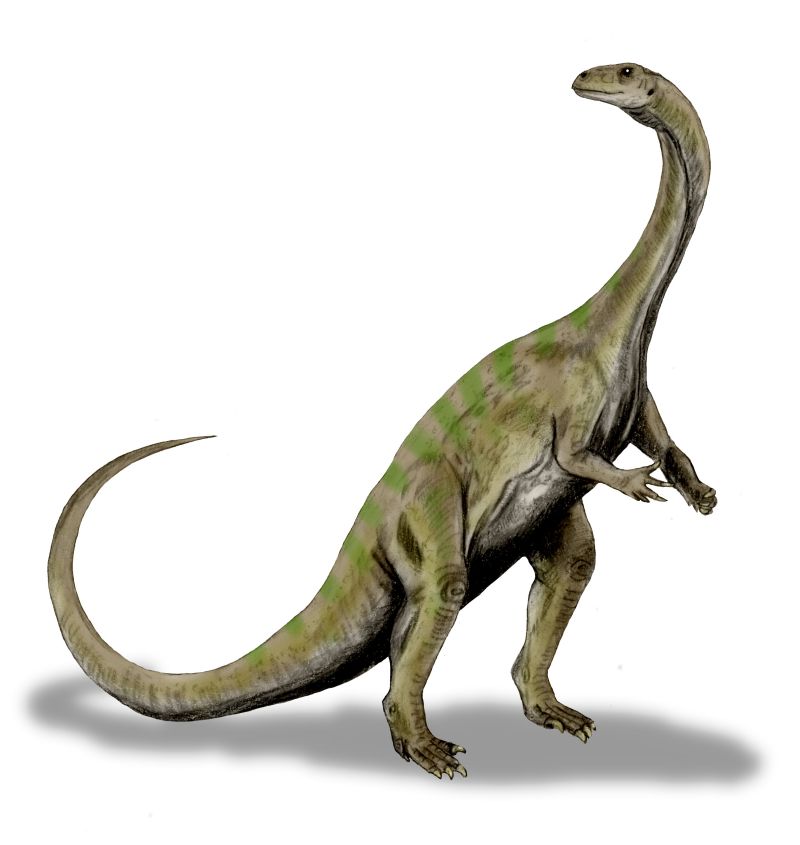 An artist’s concept of an adult Massospondylus carinatus, a prosauropod from the Early Jurassic of South Africa. Image via Nobu Tamura/ Wikimedia Commons.

Bottom line: Using powerful x-rays, scientists obtained detailed images of dinosaur embryos still encased in their fossil eggs. The eggs belonged to Massospondylus carinatus, a herbivorous dinosaur that lived 200 million years ago in South Africa. The scientists discovered that dinosaur embryos developed quite similarly to embryos of their living relatives like lizards, chickens, crocodiles, and turtles.

Via University of the Witwatersrand