Diane Macfarlane: Our biologists in the field were absolutely stunned when they pulled the camera and they reviewed the pictures they’d gotten, to find a fox! 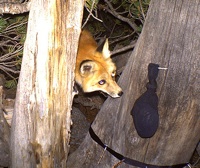 Diane Macfarlane leads the threatened, endangered, and sensitive species program for the US Forest Service Pacific Southwest region. She’s speaking of two Sierra Nevada red foxes – a kind of fox that hadn’t been seen in the Sierra Nevada mountains in over 20 years – captured in photographs by wildlife cameras in the fall of 2010. In the photographs, the biologists can see the distinctive coloring of the foxes’ fur.

The last evidence that these foxes still existed in the area was in the 1970s. But the autumn 2010 sightings confirm that there is a healthy population in the wild.

Biologists analyzed scat – feces – left behind by the foxes near the camera, and found that there was enough genetic diversity in their DNA to indicate what Macfarlane called a reasonably robust population.

Diane Macfarlane: We know from the genetics, we can predict, that there’s more than just a handful of them out there.

That means that although the species is listed as threatened in California, the Sierra Nevada red foxes are still alive and well.

Diane Macfarlane: It’s such a great feeling. This is the career high. It doesn’t get any better than finding what you thought was lost.

The photos were taken soon after the first confirmed sighting of a Sierra Nevada red fox, back in August 2010. This fox is small, with males weighing just 10 pounds on average, and measuring only two feet long from its nose to tail. They were once common among the California’s mountain ranges. But the photographs revive hope for the Sierra Nevada red foxes’ survival.

Diane Macfarlane: It was clearly a red fox on the first photo, which was an infrared camera shot. But you could see clearly the black back of the ears, the white tip of the tail. You could see the black legs and paws. Those are diagnostic of the red fox, as opposed to the grey fox, which is also in the area.

She said that there had been a report of a small population of Sierra Nevada red foxes in northern California, but this is the first conclusive evidence about the species in the south central Sierra Nevada region since the late 1970’s.

Diane Macfarlane: It’s absolutely confirmed. Not only do we have photos, we have DNA from at least two individuals. One is a male, one is a female. The genetics of the individuals – there’s enough differentiation that it leads us to conclude it’s not from a highly inbred population.

Thank you! Your submission has been received!
Oops! Something went wrong while submitting the form.
END_OF_DOCUMENT_TOKEN_TO_BE_REPLACED