Many more photos, with their descriptions, are published at Adrien Mauduit’s website. Edited version published here with permission.

When the sun is located between 0 and 18 degrees below the horizon, however, its light is more or less visible to the viewer, and it affects tremendously how we see the sky. This ‘twilight’ (after sunset) or ‘dawn’ (before sunrise) zone is divided into three sub-zones depending on the position of the sun.

– When the sun is between 0 and 6 degrees below, one calls it civil twilight or dawn. The night sky is still very bright and vibrant, landcapes can easily be seen without any problem. This is usually when our kids can still play outside and see something. Only the brightest stars and planets can be seen. High clouds (like cirrus) can take vibrant red and orange colors.

– When the sun is between 6 and 12 degrees, one calls it nautical twilight or dawn. This night sky gets considerably dimmer and one can start to spot fainter stars. Landscapes can still be distinguished, but less and less clearly.

– When the sun is between 12 and 18 degrees, one calls it astronomical twilight or dawn. The sunlight only affects a very tiny arc on the horizon, making the night sky very dark, but still in blue. The Milky Way, which was washed out, becomes visible to the unaided eye, provided one is away from heavy light pollution. Landscapes are very dark and almost impossible to make out, especially when looking directly into the twilight/dawn. 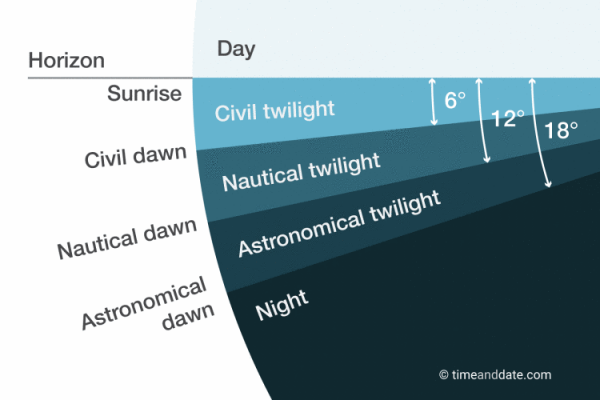 At a latitude of 56-57 degrees North, like Denmark, the sun never goes down below the astronomical twilight/dawn during late spring and summer days (late April until early August), making the nights brighter and brighter towards the summer solstice.

May is a month of transition in the southern Scandinavian country, but also a month of opportunity and hope. It’s the month where a lot of sky phenomena can occur at the same time, making an astrophotographer’s life very interesting!

In Denmark, May weather is way sunnier and clearer than the majority of the months of the year. Denmark is still under the influence of the west-bound Gulf Stream, but the hotter temperatures clear up the sky more often. It means a lot more opportunities for night-sky shooting.

The first two weeks of May still offer dark enough skies (astronomical twilight) to witness aurorae borealis, provided there is a good activity, a moonless and cloudless night. I shot some of the best aurora scenes last year at the beginning of May and assembled a short compilation in the time lapse movie, below. Look at how vibrant those solar storms were! The twilight makes them take on beautiful colors and hues.

While May is not the best month of the year for deep-sky observation in Denmark [or similar latitudes], you should definitely consider shooting wide-angle and medium-format astrophotography. Our galaxy, the Milky Way is still visible in twilight, along with the rest of the night sky. The southern portion of the night sky is way darker, enabling you to still get decent shots around midnight or 1 a.m., but you can also take awesome landscapes of the twilight. You can also gaze a some meteor showers, as well as some other possible events. Here are a few of the latest pictures I have taken this year, from around May 15 onwards. Click here to see more photos and read their descriptions.

About noctilucent clouds … Even though these night-shining clouds merely appear when the Earth is at its farthest away from the sun (June, July), some sightings are still possible by the end of May, as the mesosphere gets colder. My goal is still to take a combined picture/movie of NLC and auroras! I also put together the best shots from last year as a teaser for the upcoming NLC season.

One more reason to spend the late hours of the mild nights in Denmark!

Bottom line: Photographer and videographer Adrien Mauduit tells the story of Denmark’s “bright nights” – the nights when the sun is never far below the horizon and night is a place of continuous twilight – and he provides stunning imagery.

Twitter57Facebook1Pinterest4BufferShare
62
SHARES
Posted
May 23, 2017
in
Earth

Thank you! Your submission has been received!
Oops! Something went wrong while submitting the form.
END_OF_DOCUMENT_TOKEN_TO_BE_REPLACED