Clearest pictures ever of free-falling snowflakes

Research suggests that our iconic view of snowflakes as “perfect” isn’t true.

The National Science Foundation (NSF) released this new video about snowflakes on March 2, 2015. NSF funded a high-speed camera system – developed at the University of Utah by University of Utah engineer Cale Fallgatter and atmospheric scientist Tim Garrett – that they say has acquired the clearest pictures ever taken of free-falling snowflakes. The video, by Stephen McNally, traces the history of what most people think they know about snowflakes: that is, that a typical snowflake is a perfectly symmetrical six-sided crystal. In fact, research suggests that most snowflakes aren’t perfect.

Instead, most of the snowflakes you see in softly falling snow are aggregates of several snowflakes. Fallgatter and Garrett’s camera – which recorded the snowflakes as they fell – showed them colliding and sticking together during their fall from a cloud to Earth.

Modern cameras show that most snowflakes aren’t perfect and symmetrical. Most are aggregates – clumps of ice crystals stuck together.

The video explains that it was Wilson A. Bentley of Jericho, Vermont who was the first in the U.S. to photograph snowflakes in the 1800s. Bentley ultimately coined the phrase no two snowflakes are alike.

The thousands of photos from Bentley’s collection created our iconic view of snowflakes: each perfectly symmetrical, yet unique.

The new camera shows that snowflakes have a more intricate, imperfect beauty. 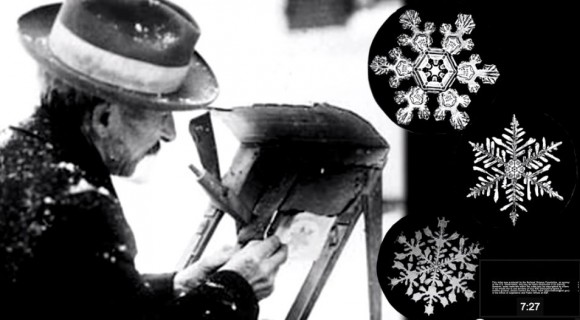 Wilson A. Bentley of Jericho, Vermont was the first in the U.S. to capture thousands of photos of snowflakes. He coined the phrase “no two snowflakes are alike.”

The technology behind the camera might now expose the potential danger of falling snow to travelers.

A less expensive, hardier version of the camera that showed snowflakes’ imperfection is being designed for use by departments of transportation to anticipate road conditions. Transportation departments nationwide use camera and sensor systems to collect and analyze data from weather stations to gauge road conditions. There may be 50 to 150 of these systems, called road weather information system stations, in any given state.

They help determine snow plow routes and preventative salting decisions, but their ability to do this well depends on the information they can collect about current conditions. And different types of precipitation can create different conditions on roadways.

The new camera system, called the Present Weather Imager, is based on Fallgatter and Garrett’s origin design. It has 1.3 megapixels, is industrial grade and priced to compete with weather stations in use by departments of transportation. The technology upon which it is based allows the system to distinguish between different types of precipitation more precisely.

Ralph Patterson, a consultant meteorologist to the camera project, said:

There are a lot of weather detection sensors that differentiate between rain and snow. But you need pretty sophisticated visibility sensors and/or present weather detectors to get snowfall rates. With this camera you get the resolution of snow crystal type and the density.

Thus the improved knowledge of snowflakes has the potential to help winter travelers stay safer.

Read more about road safety through snowflake imaging, from NSF

Bottom line: A new camera has taken the clearest pictures of snowflakes ever taken, showing that our iconic view of snowflakes as “perfect” isn’t true. Most snowflakes in free-falling snow are now known to be aggregates or clumps of snow crystals. This camera has the potential to help transportation departments forecast road conditions more accurately.