Area of low pressure across New Mexico will trigger blizzard conditions and severe weather across the central United States early this week.

A strong area of low pressure is developing across New Mexico and is expected to strengthen today (Monday, December 19, 2011) and into Tuesday. The area of low pressure will produce heavy snow across northeast New Mexico, the Texas and Oklahoma panhandles, and into western Kansas. Snowfall accumulations of over a foot are possible in many areas. Winds will be relatively strong, and blowing snow will be a huge issue. Further east of the storm, a severe weather aspect is possible across central and southeastern Texas. The main threat for these areas will include strong winds and isolated tornadoes. Overall, a very dynamic system is developing and will likely cause problems across the United States early this week.

Take a look at the developing system this morning from the National Weather Service (NWS) radar:

The biggest story from this storm will likely occur later tonight as the heavy snow forms and wind speeds increase. Blizzard warnings are in effect for northeast New Mexico, southeast Colorado, the Texas and Oklahoma panhandles, and western Kansas. Cities included in the blizzard warnings are Amarillo, Dodge City, Springfield, and Santa Rosa. The NWS defines a blizzard as a a storm which contains large amounts of snow OR blowing snow, with winds in excess of 35 mph and visibilities of less than 1/4 mile for an extended period of time (at least 3 hours). Everyone is urged to avoid travel in these areas until after the storm passes. Temperatures will likely drop into 20s as the upper level low moves into these areas. Road conditions have already deteriorated across central and northeast New Mexico.

Snowfall totals are very impressive with this storm. Here’s a couple of maps from the NWS in Albuquerque, New Mexico and Amarillo, Texas showing the expected snowfall accumulations: 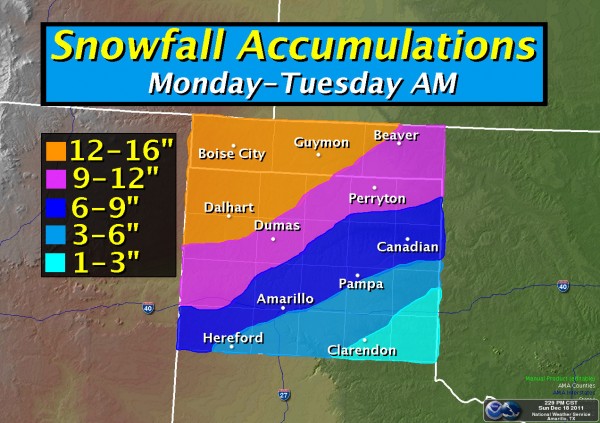 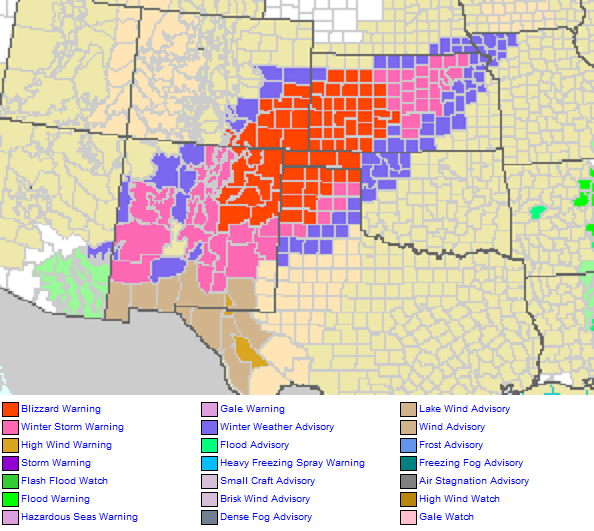 Warnings and watches for the affected areas ahead of the storm from the National Weather Service.

Here’s a nice overview created by the NWS in Albuquerque, New Mexico describing the differences between advisories, watches and warnings for wintry weather:

SPC has issued a slight risk for severe weather on December 19, 2011 for central and southeastern Texas.

The map shows a 5% probability of a tornado within 25 miles of a point near Houston, Waco, and Austin, Texas.

SPC is showing a 15% probability to see damaging thunderstorm winds or wind gusts of 50 knots or higher within 25 miles of a point.

I believe the biggest headline from this storm will be the blizzard conditions across New Mexico, the Oklahoma and Texas panhandles, southeast Colorado, and western Kansas. Many areas could receive over a foot of snow, and all motorists are urged to stay off the roads until after the storm passes. Severe weather will be possible for central and southeastern Texas this evening as the area of low pressure pushes to the northeast. The biggest threat includes isolated tornadoes and strong winds over 60 mph. I believe that any tornadoes that do develop will be relatively weak (EF-0 to EF-2 strength). The same area of storms will push east Tuesday and provide a slight risk for severe weather across eastern Mississippi and western Alabama. By late Tuesday, the storm will push further to the north and east carrying the strongest dynamics with it. With that said, severe weather should diminish across the southeast as the low weakens and the overall dynamics that influence severe weather lessen. The best news about this system is that it will provide beneficial rain to the drought-stricken areas of Texas. Many areas will see at least 0.50 inches of rain, with some areas receiving over an inch within the next two days. Stay safe, listen and follow all warnings and procedures, and please avoid travel in areas experiencing winter storm and blizzard warnings.