Scientists examined rock cores taken from the Chicxulub crater in Mexico, site of the asteroid impact that triggered dinosaur extinction, and found iridium, a telltale sign of asteroids. 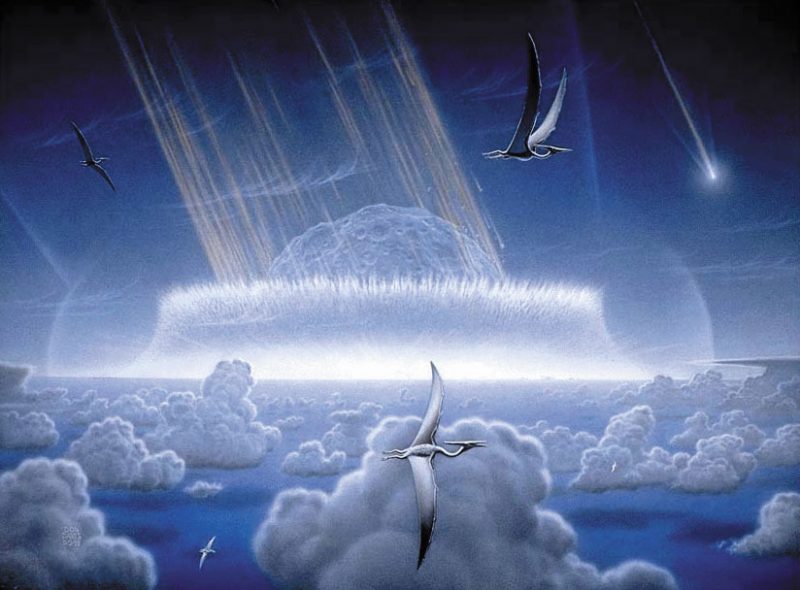 Artist’s concept of an asteroid striking Earth during the age of dinosaurs. Image via Britannica.com/ NASA/ Don Davis.

In February 2021 scientists announced the discovery of asteroid dust in the Yucatan’s famous Chicxulub crater, which has been linked for years to the dinosaurs’ extinction 66 million years ago. The scientists examined rock cores taken from the crater. They found iridium, a telltale element – rare on Earth – but abundant in certain asteroids. In the 1980s, a spike in iridium found in geologic layers across Earth led to the hypothesis that an asteroid wiped out the dinosaurs. In the 1990s, scientists found Chicxulub crater, off the Yucatan Peninsula of Mexico, and heralded it as a possible impact site. Now, scientists have found iridium in portions of Chicxulub crater itself. That discovery “seals the deal,” these researchers said.

Sean Gulick of University of Texas at Austin co-led the 2016 expedition to the Chicxulub crater with Joanna Morgan of Imperial College London. The expedition extracted nearly 3,000 feet (914 meters) of rock cores from the crater under the seafloor. Analyses of these rock cores led to the iridium discovery. Gulick said:

We are now at the level of coincidence that geologically doesn’t happen without causation. It puts to bed any doubts that the iridium anomaly [in the geologic layer] is not related to the Chicxulub crater. 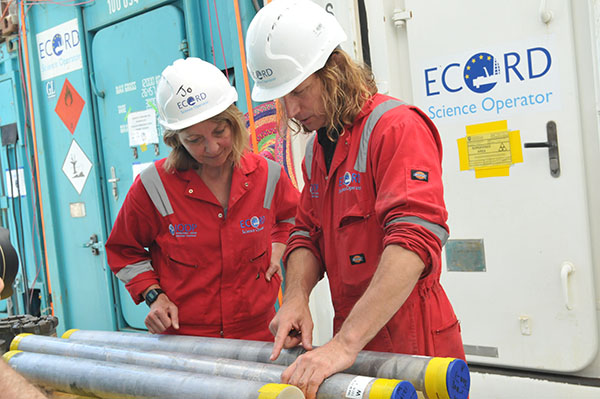 The results of the new study were published February 24 in the peer-reviewed journal Science Advances. The discovery of iridium at ground zero in the crater is in a thick enough layer that scientists could precisely date its deposition between days to two decades after the strike. Thus, the dust that was forced into the atmosphere from the impact remained there for up to two decades before falling back to Earth and coating surfaces worldwide. As Gulick said:

If you’re actually going to put a clock on extinction 66 million years ago, you could easily make an argument that it all happened within a couple of decades, which is basically how long it takes for everything to starve to death. 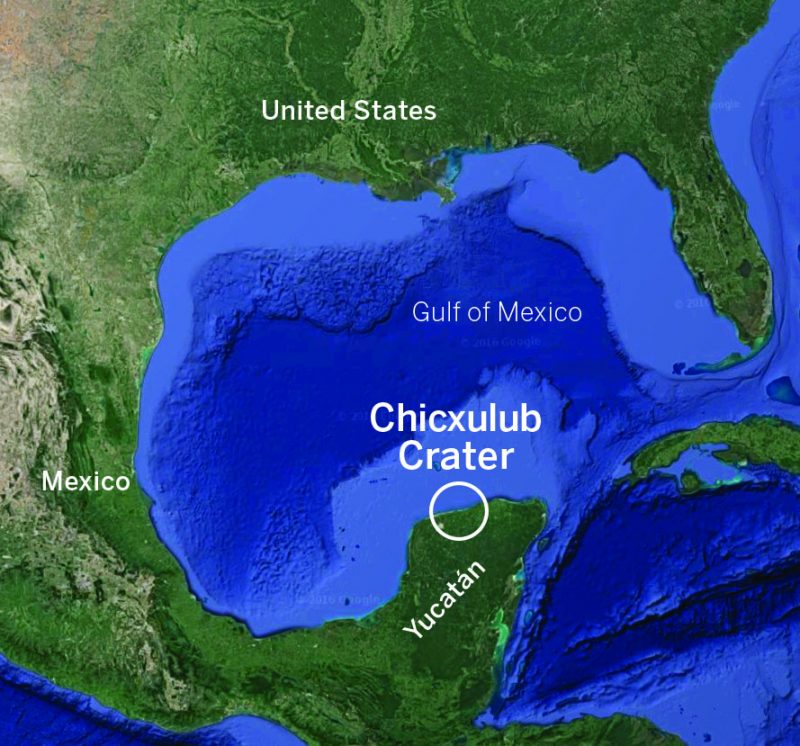 The Chicxulub crater, where an asteroid crashed millions of years ago and triggered the extinction of the dinosaurs, is located on the Yucatan Peninsula of Mexico. Image via University of Texas at Austin/ Google Maps.

Scientists have estimated that the dinosaur-killing asteroid was about seven miles (11 km) wide and left behind a crater 125 miles (200 km) wide. The dust ejected into the atmosphere from the force of the impact blocked out the sun for decades, causing the extinction of 75% of life on Earth, scientists believe.

The researchers found the greatest concentrations of iridium near the top of the crater’s peak ring. A peak ring on a crater is an interior circular area where material has splashed back to the ground around the impacting object. Peak ring craters do not have a central peak. 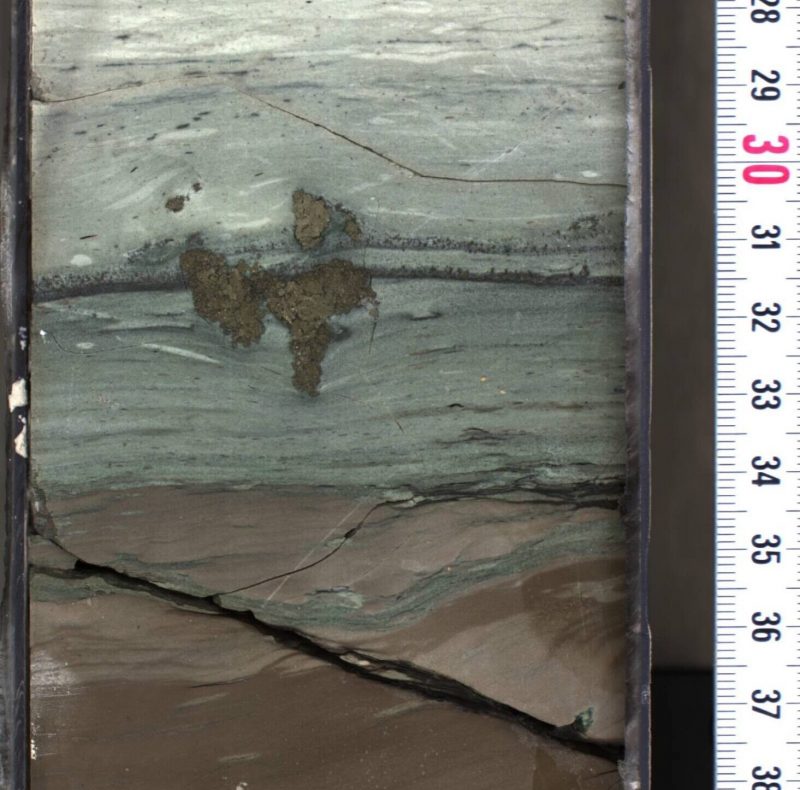 Scientists examined rock samples pulled from the crater left by the impact that wiped out the dinosaurs, such as the section of rock core shown here. Researchers found high concentrations of the element iridium – a marker for asteroid material – in the middle section of the core, which contains a mixture of ash from the impact and ocean sediment deposited over decades. The iridium is measured in parts per billion. Image via University of Texas at Austin/ International Ocean Discovery Program.

A longer view of the entire core sample. Image via University of Texas at Austin/ Constantino Panagopulos.

The scientists sent their rock-core samples to labs in four different countries in order to verify their findings. Iridium was not the only elevated element found in the section of crater they examined. The specimens contained other elements associated with asteroids that coincide with 52 locations across the globe dated to the same geologic layer. One of the “Earth bound” elements found in the layer was sulfur, which would have been launched into the atmosphere, seeding clouds with acid rain and contributing to the cooling climate.

The scientists plan to return to the crater this summer to survey the crater’s center, the target of future core sample return missions. 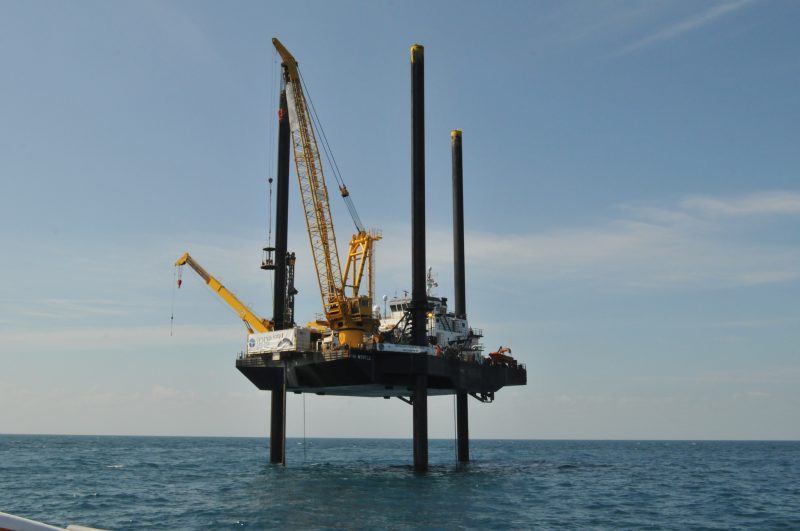 Researchers drilled cores from Chicxulub crater, which lies partly under the Gulf of Mexico. Image via University of Texas at Austin/ Constantino Panagopulos.

Bottom line: Rock cores excavated from the rim of the Yucatan’s Chicxulub crater revealed a layer of iridium, a common component of asteroids. Scientists believe this evidence confirms that Chicxulub crater is the impact site of an asteroid that disrupted global climate and led to the dinosaurs’ extinction 66 million years ago.