A glaciologist has discovered a possible 2nd impact crater buried under more than a mile of ice in northwest Greenland.

Scientists think that a newly-discovered bowl-shaped feature buried under more than a mile of ice in northwest Greenland might be another impact crater.

This follows the finding, announced in November 2018, of a 19-mile (30.5-km) wide crater beneath Hiawatha Glacier – the first meteorite impact crater ever discovered under Earth’s ice sheets.

Though the newly found impact sites in northwest Greenland are only 114 miles (183.4 km) apart, at present they do not appear to have formed at the same time.

If the second crater, which has a width of over 22 miles (35.4 km), is ultimately confirmed as the result of a meteorite impact, it will be the 22nd largest impact crater found on Earth.

Joe MacGregor is a glaciologist with NASA’s Goddard Space Flight Center in Greenbelt, Maryland, who participated in both findings. MacGregor reported the discovery of this second possible crater in Geophysical Research Letters on February 11, 2019. He told NBC News:

Once we knew from Hiawatha that there could be craters under ice sheets, it was quite easy to find the next one using an ensemble of publicly available NASA data. 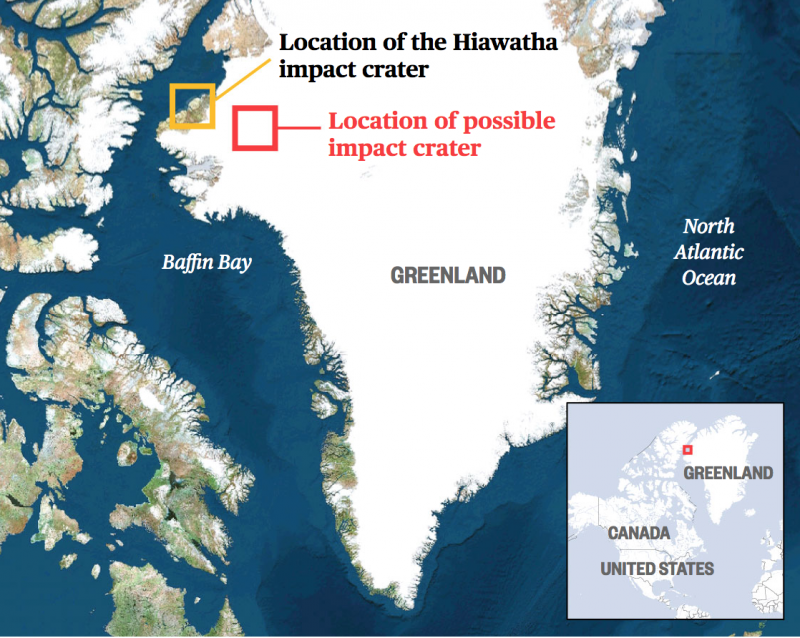 Before the discovery of the Hiawatha impact crater, scientists generally assumed that most evidence of past impacts in Greenland and Antarctica would have been wiped away by unrelenting erosion by the overlying ice.

Following the finding of that first crater, MacGregor checked topographic maps of the rock beneath Greenland’s ice for signs of other craters. Using satellite imagery of the ice surface, he noticed a circular pattern some 114 miles (183.4 km) to the southeast of Hiawatha Glacier. He said:

I began asking myself ‘Is this another impact crater? Do the underlying data support that idea?’ Helping identify one large impact crater beneath the ice was already very exciting, but now it looked like there could be two of them.

To confirm his suspicion, MacGregor studied the raw radar images that are used to map the topography of the bedrock beneath the ice. What he saw under the ice were several distinctive features of a complex impact crater: a flat, bowl-shaped depression in the bedrock that was surrounded by an elevated rim and centrally located peaks, which form when the crater floor equilibrates (bounces back up) post-impact. Though the structure isn’t as clearly circular as the Hiawatha crater, MacGregor estimated the second crater’s diameter at 22.7 miles (36.5 km). MacGregor said:

The only other circular structure that might approach this size would be a collapsed volcanic caldera. But the areas of known volcanic activity in Greenland are several hundred miles away.

By analyzing ice layers and rates of erosion, the researchers suggest that although the two newly-found impact craters in northwest Greenland are only 114 miles (183.4 km) apart, they were not formed at the same time. Read more here about how the team made this determination. MacGregor said:

On the whole, the evidence we’ve assembled indicates that this new structure is very likely an impact crater, but presently it looks unlikely to be a twin with Hiawatha.

Bottom line: A glaciologist has discovered a possible 2nd impact crater buried under more than a mile of ice in northwest Greenland.