Researchers have identified a large meteorite impact crater hiding under the Greenland ice. The enormous crater – bigger than Paris – appears to be result of meteor strike just 12,000 years ago.

An international team of researchers has discovered a large meteorite impact crater hiding beneath more than a half-mile (about 1 km) of ice in northwest Greenland. The crater – the first of any size found under the Greenland ice sheet – is one of the 25 largest impact craters on Earth, measuring roughly 1,000 feet (300 meters) deep and more than 19 miles (30 km) in diameter, bigger than Paris or the Beltway around Washington, D.C.

The crater formed less than 3 million years ago, according to the study, when an iron meteorite more than half a mile (1 km) wide smashed into northwest Greenland. The resulting depression was subsequently covered by ice.

Kurt Kjær is a professor at the Center for GeoGenetics at the Natural History Museum of Denmark and lead author of the study, published November 14, 2018, in the peer-reviewed journal Science Advances. Kjær said that the crater’s condition indicates the impact might have occurred toward the end of the last ice age, which would place the resulting crater among the youngest on the planet. Kjær said:

The crater is exceptionally well-preserved and that is surprising because glacier ice is an incredibly efficient erosive agent that would have quickly removed traces of the impact. 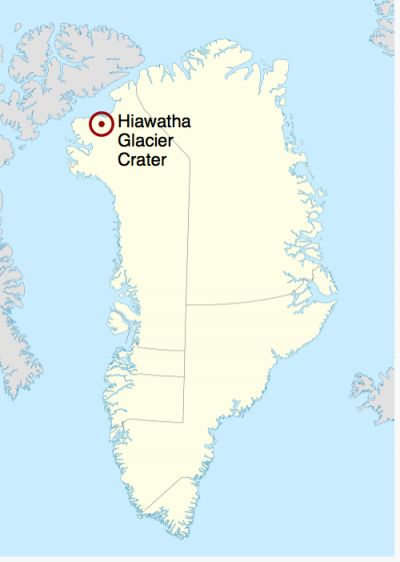 Location of Hiawatha Glacier Crater in Greenland. Image via Wikipedia. 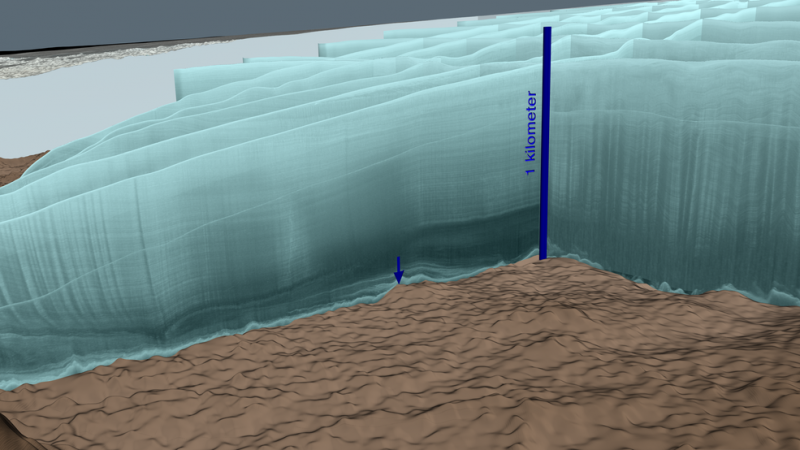 Radar data from an intensive aerial survey of the Hiawatha crater in May 2016 is shown here in aqua-colored curtains. A blue arrow points to the central peak of the crater. Image via NASA/Cindy Starr.

The researchers first spotted the crater in July 2015 while they were inspecting a new map of the topography beneath Greenland’s ice sheet. The map was made using ice-penetrating radar data primarily from NASA’s Operation IceBridge – a multi-year airborne mission to track changes in polar ice – and earlier NASA airborne missions. The scientists noticed an enormous, previously unexamined circular depression under Hiawatha Glacier, sitting at the very edge of the ice sheet in northwestern Greenland.

Using satellite imagery, the team also examined the surface of the ice in the Hiawatha Glacier region and quickly found evidence of a circular pattern on the ice surface that matched the one observed in the bed topography map. 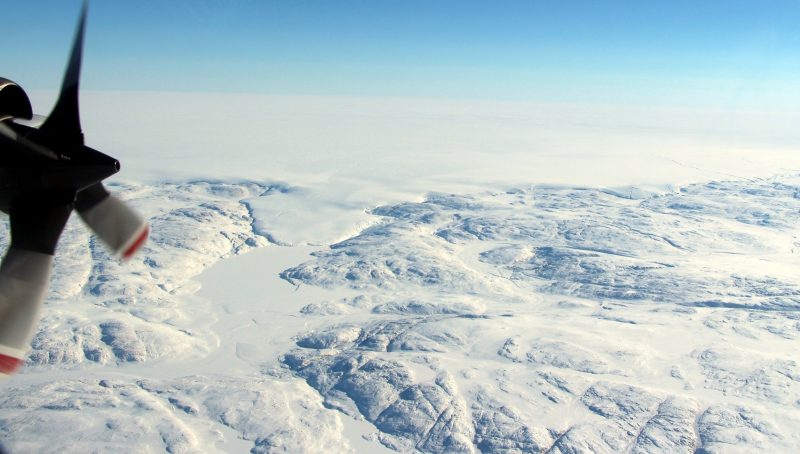 The Hiawatha impact crater is covered by the Greenland Ice Sheet, which flows just beyond the crater rim, forming a semicircular edge. Part of this edge (top of photo) and a tongue of ice that breaches the crater’s rim are shown in this photo taken during a NASA Operation IceBridge flight on April 17, 2018. Image via NASA/John Sonntag.

To confirm their suspicions, in May 2016 the team sent a research plane to fly over the Hiawatha Glacier and map the crater and the overlying ice with a state-of-the-art ice-penetrating radar. In the summers of 2016 and 2017, the research team returned to the Hiawatha Glacier to map tectonic structures in the rock near the foot of the glacier and collect samples of sediments washed out from the depression through a meltwater channel.

Nicolaj Larsen of Aarhus University in Denmark is one of the authors of the study. Larsen said in a statement:

Some of the quartz sand coming from the crater had planar deformation features indicative of a violent impact; this is conclusive evidence that the depression beneath the Hiawatha Glacier is a meteorite crater.