Posted by Shireen Gonzaga and Deborah Byrd in Earth | April 11, 2020

Anak Krakatau (Child of Krakatau) volcano began erupting last night – Friday, April 10, 2020 – according to clocks in Indonesia. The eruption is not thought to be major, although it’s the longest eruption since 2018. Webcams and satellites caught its awesome beauty.

Anak Krakatau (Child of Krakatau) volcano in the Indonesian province of Lampung erupted on Friday, April 10, 2020. This volcano is an island between the islands of Java and Sumatra in Indonesia. It emerged from a caldera left by the explosive volcanic eruption that destroyed the island of Krakatoa in 1883. The word “Anak” means “child” in Indonesian. According to a story in the Jakarta Post, Anak Krakatau was seen on April 10:

The Center for Volcanology and Geological Disaster Mitigation’s (PVMBG) magma volcanic activity report said that the first eruption lasted one minute and 12 seconds starting at 9:58 p.m., when it spewed out ash and smoke 200 meters [about 650 feet] high.

The volcanology center reported a second eruption at 10:35 p.m. that lasted for 38 minutes and 4 seconds, spewing out a 500-meter-high [1,600-foot-high] column of ash that blew to the north. 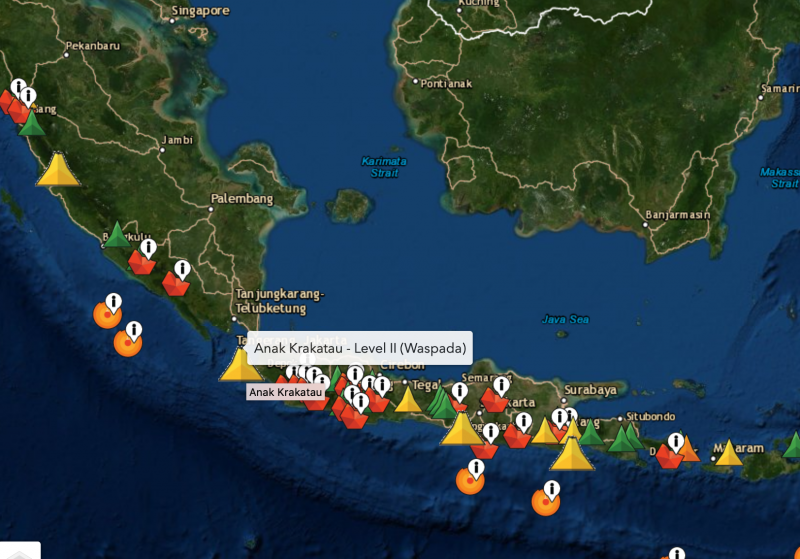 Overnight, Twitter began buzzing with updates on the volcano, which was reported by Indonesia’s Meteorology, Climatology, and Geophysical Agency (@infoBMKG on Twitter):

Geophysicist Mika McKinnon (@mikamckinnon on Twitter) provides some good background info on the eruption in the following tweet threads. Check McKinnon’s Twitter feed for updates. By the way, the image just below – which was widely circulated on Twitter – is not from last night’s eruption; that video was taken in 2018.

Krakatau erupted so fiercely in 1883 that it destroyed itself while wrecking devastation. This is Anak Krakatau, “Child of Krakatau” rebuilt by subsequent eruptions

This eruption is not unusual but it is dangerous. Stay away https://t.co/zQPutJICmr

Q: Is this video from the current eruption? How about this video? This one??

A: Does Anak Krakatau look like a nice, pointy volcano? 2018 or earlier.

Does it looks like a weird flat glowy hillside of strangeness that's kinda a volcano if you squint at it? Possibly 2020.

Volcanologist Jess Phoenix (@jessphoenix2018 on Twitter) said that the April 10, 2020, eruption of Anak Krakatau represents the most activity seen from this volcano since 2018. She also pointed out that this eruption is a perfectly normal occurrence. Check Phoenix’s Twitter feed for updates, too.

Exactly! There are 40-50 volcanoes erupting right now. We don't hear about them unless they're A) near a populated area, or B) a famous one that has erupted in recorded human history. We hear about Anak Krakatau because its predecessor, Krakatau, erupted in huge fashion in 1883. https://t.co/xtS5N5PzNc

Note to self: Do not attempt to tweet about ANAK Krakatau after wine. This is not the volcano name to leave up to autocorrect. ?

Here are ACTUAL pictures of the April 10 eruption, if you're looking for those. Yes, there is visible lava. No, this isn't a huge eruption. pic.twitter.com/7FEUDlDupR

Beautiful visual of something the public generally doesn't get to see associated with a volcanic eruption. #Krakatau #AnakKrakatau #volcano https://t.co/6lOUl2DP2U

Anak Krakatau is erupting now. The first image is from our webcam:https://t.co/O8KFco7NOx

The second photo was taken from our observatory (~43 km from the volcano). pic.twitter.com/nlHHWIyuAw

And here is more:

Krakatau is erupting nonstop for 2 hours ? I live in bogor and I can hear the noises as clear as everybody else hear. This feels like a nightmare. I hope everyone live near the eruption will be safe ?? aamiin pic.twitter.com/8hz3gr6Vuh

Bottom line: Anak Krakatau – in English, Child of Krakatau – began erupting on April 10, 2020. The eruption is not thought to be major. Webcams caught its beauty.