Large tornadoes hit parts of northern Poland this past weekend. Check out these wild videos! 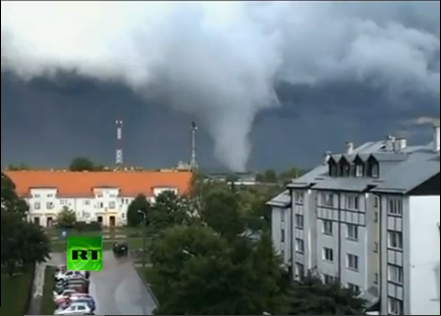 Still image from the videos posted below displaying the tornadoes that struck parts of Northern Poland on July 14, 2012. Image Credit: Russia Today (Youtube)

A strong storm system swept through parts of northern and western Poland Saturday, July 14, 2012. This system produced relatively strong tornadoes in the region across the Kujawy-Pomorze and Wielkopolska regions. According to BBC News, 400 hectares (nearly 1,000 acres) of trees have also been damaged in Bory Tucholskie forest, which is a popular tourist attraction in Poland. As of now, these storms killed one person and injured at least ten others. Over 100 homes received damage or were destroyed.

Tornadoes are rated based on the damage they produce. Weak tornadoes are rated an EF-0 to EF-1 (EF = Enhanced Fujita) and can typically knock down trees and cause minor damage to buildings. As you reach the EF-2 or EF-3 rating, damage becomes more severe with severe damage to houses. EF-4 and especially EF-5 tornadoes are extremely rare and violent as they can completely destroy well built buildings and even remove the bark off trees and pavement/concrete from the ground. The Poland tornado was probably rated around the EF-2 range, based on reports by news station TVN24 who estimated winds were roughly 200 kilometers per hour (or 124 miles per hour). 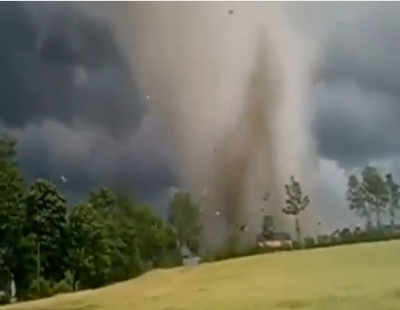 Are tornadoes in Poland rare?

Tornadoes in general are rare events, but are not uncommon for parts of Europe. The United States is the most favorable region to experience tornadoes, especially in the spring and early summer months. The storm systems that have occurred in Europe have been “dramatic” according to BBC’s Adam Easton. In the United Kingdom, wet weather has been the dominant story for the region as relentless rains continue to soak the area, including London, which is hosting the Olympic games this summer. With such an active weather pattern across Europe, seeing storm systems like the ones that pushed into Poland this weekend are not becoming such a huge surprise.

Bottom line: A series of storm systems produced tornadoes in parts of northern and western Poland on Saturday, July 14, 2012. These storms killed one person and injured at least ten people. At least 100 homes were damaged or destroyed, and many people are cleaning up after the storms pushed through parts of the Kujawy-Pomorze and Wielkopolska regions. Tornadoes are rare events in themselves, but can and do occur throughout Europe.