All eyes on Gulf of Mexico as Tropical Storm Don forms

Tropical Storm Don is aimed for Texas by Friday or Saturday. The National Hurricane Center forecasts it will become a strong tropical storm with winds around 65 mph.

90L, the name given to a tropical wave approaching the Yucatan Peninsula, is now Tropical Storm Don with winds of 40 mph, a pressure reading of 1001 mb, and moving WNW at 12 mph with his eyes set for parts of Texas by Friday or Saturday. 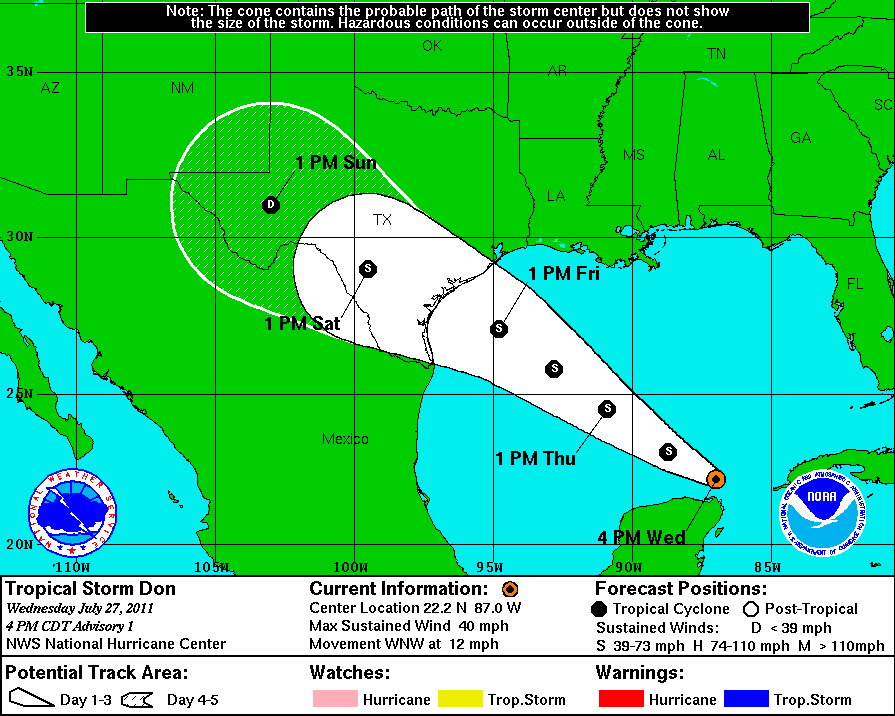 Tropical Storm Don, over the southern Gulf of Mexico,  is currently over very warm sea surface temperatures (SST) in the mid to upper 80s, which is plenty warm enough to sustain/strengthen a tropical cyclone.  Don might have to deal with some dry air that could inhibit further strengthening. I will note that this system has struggled with dry air before, but was able to moisten the atmosphere as it traveled westward. It might be able to do the same thing as it emerges in the Gulf.  Wind shear should not be a huge issue as it moves west-northwest into the Gulf of Mexico.

What is wind shear?  Imagine blowing out a flame on a candle.  The flame is like a tropical cyclone, and the air you exhale is like wind shear.  The stronger your exhale, the better odds you have at killing the flame.  Tropical systems are very similar to a flame on a candle because too much wind shear can disrupt the organization of the storm and weaken it.

It has been 1,047 days since the United States has had a land-falling hurricane.  The last storm that impacted the region was back on September 13, 2008 when Hurricane Ike made landfall around Galveston, Texas.  Now is the time to be prepared for tropical systems as August/September look to be extremely active.

Anyone along the Texas coast should keep a close eye on Tropical Storm Don.  The track of the storm relies on the ridge of high pressure that is pushing eastward into the United States.  If the high weakens and pushes further east, Tropical Storm Don could find a weakness in the ridge and push towards the Texas and Louisiana borders. At this time, I believe the path of the storm will be further south than what the models are projecting, which could impact Brownsville to Corpus Christi, Texas. 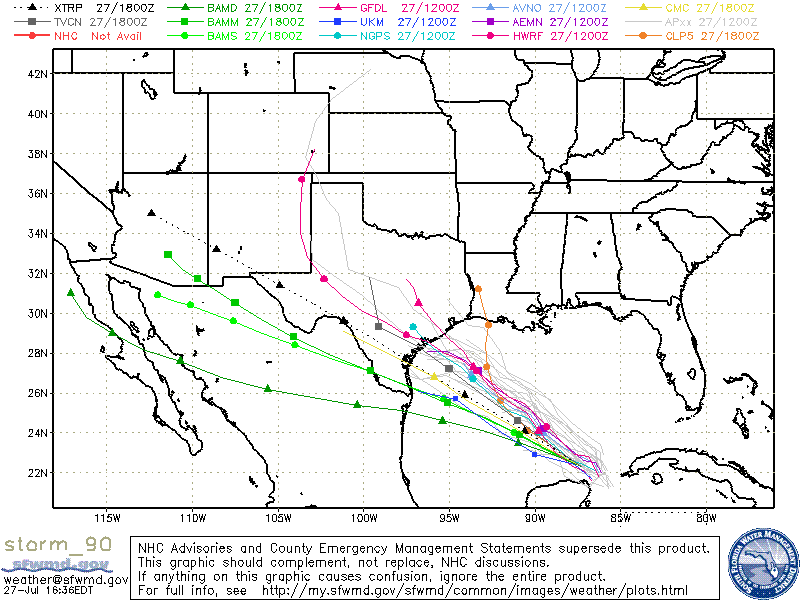 I’ll keep an eye on this system as it continues to develop.  The National Hurricane Center is forecasting this system to become a strong tropical storm with winds around 65 mph. I would not rule out the possibility for this storm to become a hurricane before it makes landfall Friday or Saturday. Intensity forecasts for small systems are really difficult. They can intensify or weaken faster than a larger cyclone. With that in mind, all interests from Brownsville, Texas to the Louisiana coasts should keep a close eye on Don as it tracks west-northwest.  Hopefully, Texas can receive some beneficial rains from Don which would help with the ongoing drought.

Mother nature is unpredictable, and we certainly hate unexpected surprises.