Alaska landslide might be largest recorded in North America

The June 11, 2012 landslide in Glacier Bay National Park might be the largest ever recorded in North America, according to a story by AP on July 12. 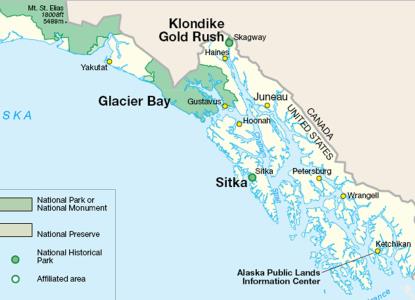 Glacier Bay National Park is located in the southeastern Alaska wilderness. It can be reached via a short flight from Juneau, Alaska. Image via National Park Service.

Landslides occur in all 50 U.S. states and territories, according to the U.S. Geological Survey. The Appalachian Mountains, the Rocky Mountains and the Pacific Coastal Ranges and some parts of Alaska and Hawaii have severe landslide problems. AP had a great story yesterday about a massive rock slide in Glacier Bay National Park earlier this summer. The event took place on June 11, 2012, but no one noticed it until a pilot happened to fly past the area a month later. According to AP’s story, some are now saying this landslide – which sent rock and ice pouring down a valley, over the top of a glacier – might be the largest ever recorded in North America.

Read more from AP of the June 11 landslide in Alaska

See a picture gallery of the Alaska landslide here

Any area composed of very weak or fractured materials resting on a steep slope can experience landslides. Other natural disasters – such as earthquakes, volcanoes and wildfires – are often triggers, but landslides can also occur without those triggers.

If you’re interested in learning more about landslides, check out this short video from National Geographic. It’s excellent … and dramatic.

Bottom line: The June 11, 2012 landslide in Glacier Bay National Park might be the largest ever recorded in North America, according to a story by AP on July 12.