It’s like a hurricane, but it’s over land. These systems are not uncommon in Australia, and, last weekend, conditions were ripe for one.

Have you ever seen a tropical cyclone – what most would call a hurricane – develop over land? Is a landcane even possible? Although it sounds strange and almost unlikely, in some cases it is possible for an area of low pressure to obtain characteristics of a tropical cyclone while over a land area. Last weekend – January 18-19, 2014 – an area of low pressure intensified across northwestern Australia. Satellites indicated growing convection around the center of low pressure and decent outflow around the entire system. Although this system, this landcane, was not named, it is still a very cool thing to see via satellite imagery.

What causes these rare systems to form or intensify on land? As you will find out, extreme weather can fuel these rare storms. 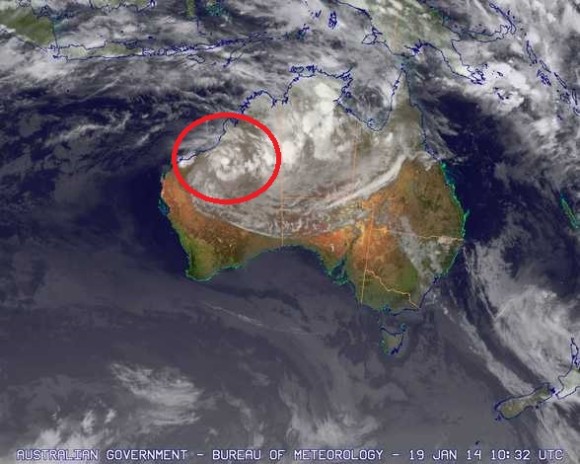 Satellite imagery on January 19, 2014. Image via Australia Bureau of Meteorology

How did it form?

There have been studies talking about the formation of “landcanes” over Australia. In a paper by Emanuel Et al (2008), a group of scientists analyzed the redevelopment of warm-core cyclones over northern Australia. In the paper, they suggest that one of the reasons storms can intensify over land is thanks to large vertical heat fluxes from a layer of very hot soil at the surface.

Usually, when this occurs, the soil has been made wet by a recent storm system. In a way, the wet ground acts like a shallow ocean that is able to transfer energy to the storm. When this happens, a warm-core cyclone can develop.

Extreme heat has hit Australia during the month of January. Temperatures have soared above 38 degrees Celsius (100 degrees Fahrenheit). Over the past several months, northwestern Australia has seen above average rainfall. According to the Australian Government Bureau of Meteorology, western Australia has seen nearly double the amount of rainfall they typically average during the months of October, November, and December.

Conditions in Australia were ripe for a landcane to form. 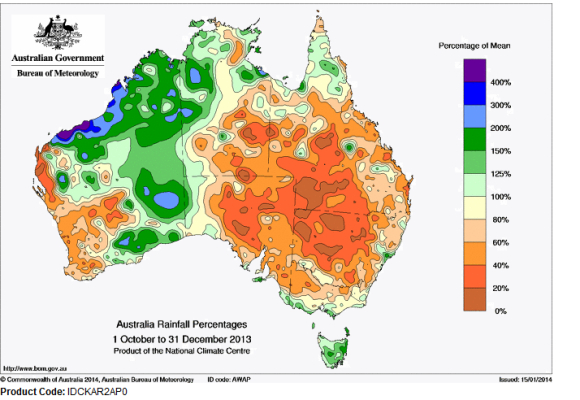 Parts of western Australia had seen nearly double the rainfall typically seen during the months of October, November, and December 2013. The wet ground probably helped steer the development of a landcane over this region on January 18, 2014. Image via Australia Bureau of Meteorology 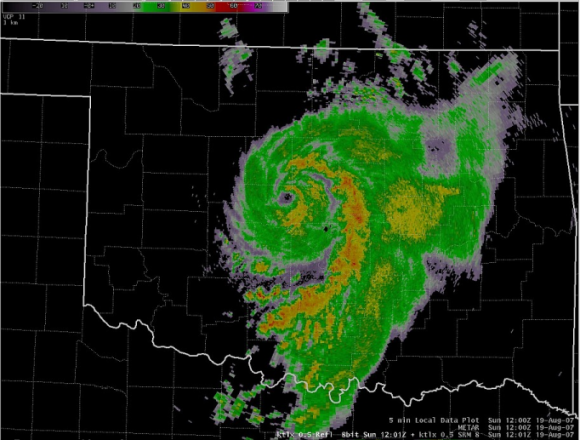 In another study by Theresa Andersen and Dr. Marshall Shepherd from the University of Georgia, research was done to understand how these systems can develop over land. One of the many examples that were looked at was Tropical Storm Erin (2007), which intensified over land while spinning over Oklahoma. Erin formed an eye over Oklahoma which was seen through radar imagery. The goal of this paper was to study why these systems intensify over land. They framed the concept as the brown ocean. The study was also the first comprehensive climatology of how frequently this happens and the most likely geographic locations. Interestingly, they found that Australia is the most likely place, particularly after prior rainfall from other storm systems.

What are the characteristics of a brown ocean? According to NASA:

Andersen and Shepherd show that a brown ocean environment consists of three observable conditions. First, the lower level of the atmosphere mimics a tropical atmosphere with minimal variation in temperature. Second, soils in the vicinity of the storms need to contain ample moisture. Finally, evaporation of the soil moisture releases latent heat, which the team found must measure at least 70 watts averaged per square meter. For comparison, the latent heat flux from the ocean averages about 200 watts per square meter. 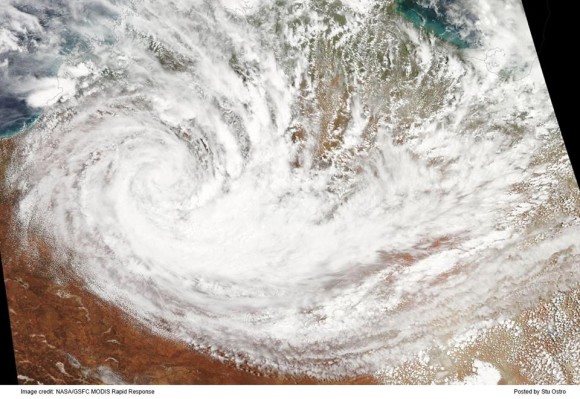 Satellite imagery on January 18, 2014 over Australia showing the landcane. Image via NASA.

Bottom line: Although it is rare to see tropical cyclones form over land, a combination of wet soils and very warm temperatures contributed to the intensification of an area of low pressure in Australia last weekend. On January 18, 2014, a landcane formed over parts of northwestern Australia.