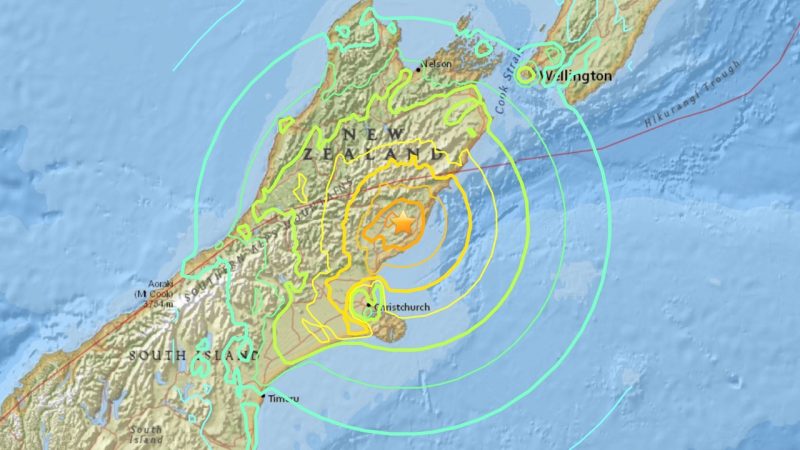 Early Sunday according to clocks in North America (just after midnight in New Zealand on Monday), the U.S. Geological Survey (USGS) reported a 7.8-magnitude earthquake, which jolted New Zealand’s South Island. The quake occurred northeast of Christchurch, New Zealand. Local Civil Defense issued a tsunami warning following the quake. The tsunami threat lasted for hours and covered the east coast of all New Zealand. Residents were urged throughout the day not to sightsee along the coast and to move to higher ground immediately. BBC and other media are now reporting two dead following the day’s events.

The Pacific Tsunami Warning Center did not issue a Pacific-wide warning.

Hundreds of tremors, including a 6.3-magnitude quake, followed the initial earthquake.

If you're searching for someone, please call the Police Southern Communications Centre on 0800-780-102

The large quake’s epicentre was near the town of Kaikoura which is now reportedly cut off by landslides. BBC said three hours ago (12:00 UTC on November 14):

A large river dammed up by a landslide also breached its banks, sending a “large wall of water” downstream.

Residents around the Clarence River – one of the largest on South Island – were being urged to move immediately to higher ground.

Authorities have spent the night and day rescuing and evacuating residents along the east coast.

Here’s what Geonet says about the initial large earthquake 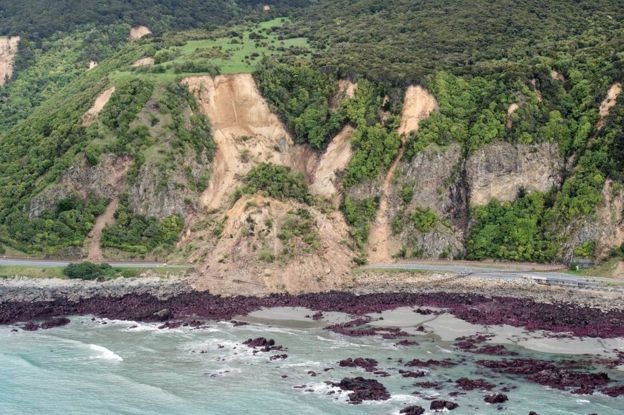 New Zealand Civil Defense posted throughout the day on Twitter, repeatedly reminding people to stay away from the coasts and over and over publishing the graphic below, as aftershocks continued.

The two deaths reported so far both occurred near the town of Kaikoura, according to New Zealand media. A 100-year-old woman and her daughter-in-law were pulled from their home – alive – in that town, after the house collapsed in the initial, 7.8-magnitude earthquake. The younger woman’s husband was still in the house and was reported dead.

Southwest of Kaikoura, there was a second reported death of woman with an existing medical condition.

Two cows and a calf have been cut off by the New Zealand earthquake after the ground around them gave way pic.twitter.com/aGiPW6WID1

Pacific Ring of Fire, where the edges of great land plates are moving with respect to each other, creating frequent earthquakes and volcanos.

Bottom line: A strong earthquake in New Zealand on November 14, 2016 has left two dead and much infrastructure damage on that country South Island.