A large swath of Texas is heaving and sinking

The oil-rich Permian Basin is having a resurgence in active drilling. Researchers report that, in one place, the ground has shifted 40 inches (about a meter) over the past two-and-a-half years. 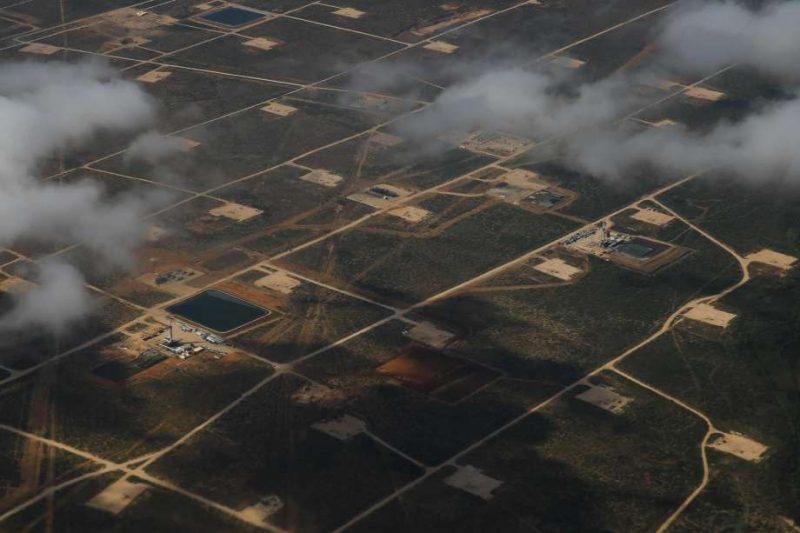 Oil rigs in the Permian Basin, outside Midland, Texas, via the Houston Chronicle.

Remember Edna Ferber’s book Giant, made into a now-classic 1956 movie with Rock Hudson and Elizabeth Taylor? The movie was shot in and around the town of Marfa, in West Texas, located in what’s called the Permian Basin, an area approximately 250 miles (400 km) wide and 300 miles (480 km) long. Somewhere in the story (spoiler alert), the character of Jett Rink, played in the movie by James Dean, strikes oil. That was fiction. But, in reality, West Texas’ Permian Basin has long been known as oil-and-gas rich, and recent years have brought a resurgence in active drilling. According to the Texas Railroad Commission, more than 7,000 oil fields now dot the Permian Basin, and recent increased use of enhanced-recovery practices (like like hydraulic fracturing, also known as fracking) has resulted in “a substantial impact on U.S. oil production.” In the meantime, a team of researchers from Southern Methodist University (SMU) in Dallas, Texas, has made a startling discovery. They’ve found that large portions of four Texas counties in the Permian Basin are both sinking and uplifting.

The counties are Winkler, Ward, Reeves and Pecos, an area nearly the size of the U.S. state of Connecticut (about 4,000 square miles, or 10,000 square km). The study area in these counties includes the Texas towns of Pecos, Monahans, Fort Stockton, Imperial, Wink and Kermit.

In one place, they said, the ground has shifted as much as 40 inches (about a meter) over the past 2.5 years. 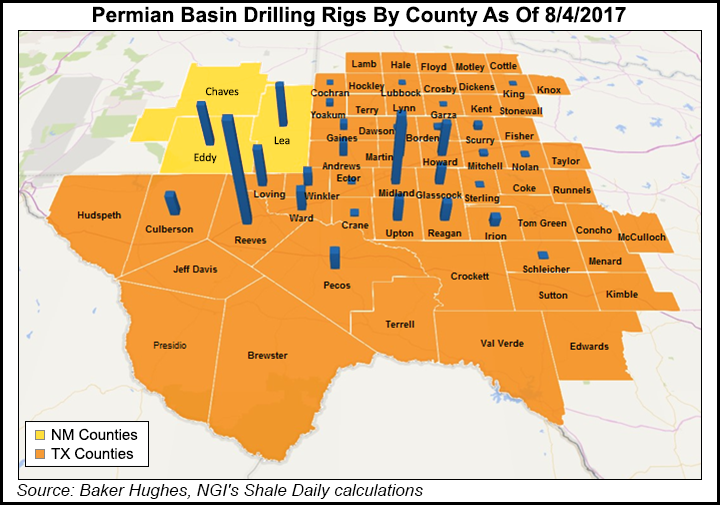 West Texas is a desert. But it’s also home to some treasured natural areas, such as the world’s largest natural springs swimming pool in Reeves County, one of the areas studied by the SMU team. Image via at Balmorhea State Park.

The [radar] imagery, coupled with oil-well production data from the Texas Railroad Commission, suggests the area’s unstable ground is associated with decades of oil activity and its effect on rocks below the surface of the Earth.

… decades of oil production activity have destabilized localities populated by small towns, roadways and a vast network of oil and gas pipelines and storage tanks.

The study was published March 16, 2018, in Nature’s peer-reviewed journal Scientific Reports. Among other things, the study suggests that two giant sinkholes near Wink, Texas might be just “the tip of the iceberg.” 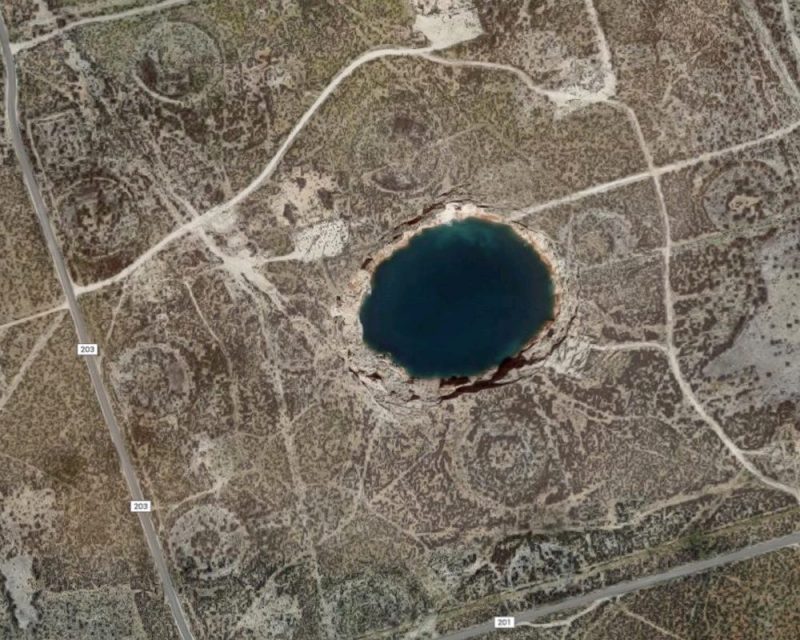 Earlier, these same SMU researchers also studied the 2 massive sinkholes between the towns of Wink and Kermit, Texas – in the Permian Basin – and found the holes are getting bigger. There’s concern the pits could converge into a single giant hole. Image via WBUR. 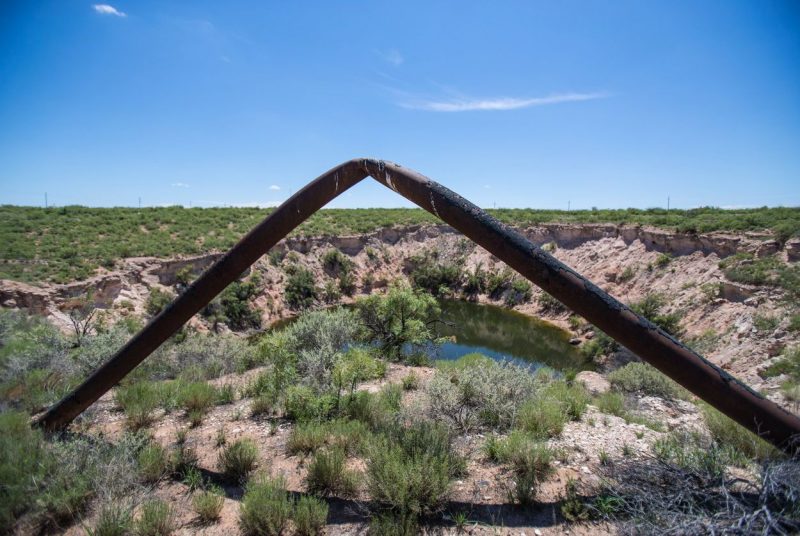 A twisted pipeline stretches near Wink Sinkhole No. 1, showing the force of the collapse of tons of dirt. Image via Rafael Aguilera/The Texas Tribune.

The ground movement we’re seeing is not normal. The ground doesn’t typically do this without some cause.

These hazards represent a danger to residents, roads, railroads, levees, dams, and oil and gas pipelines, as well as potential pollution of ground water.

The scientists worked with radar imagery acquired between November 2014 and April 2017. 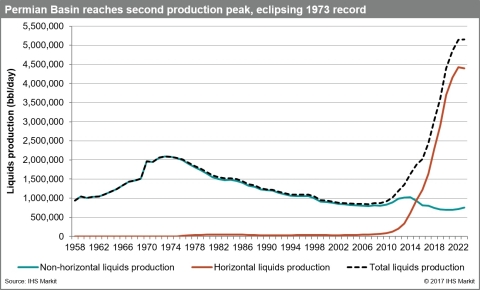 The researchers cautioned that ground movement might extend beyond what radar observed in the four-county area. They said the entire region – consisting of water-soluble salt and limestone formations, and shale formations – is highly vulnerable to human activity due to its geology. Study co-author Jinwoo Kim of SMU said:

We’re fairly certain that when we look further, and we are, that we’ll find there’s ground movement even beyond that. This region of Texas has been punctured like a pin cushion with oil wells and injection wells since the 1940s and our findings associate that activity with ground movement.

There have also been six small earthquakes recorded just south of Pecos, Texas, in recent years, suggesting the deformation of the ground generated accumulated stress and caused existing faults to slip. Kim commented:

We have seen a surge of seismic activity around Pecos in the last five to six years. Before 2012, earthquakes had not been recorded there. At the same time, our results clearly indicate that ground deformation near Pecos is occurring. Although earthquakes and surface subsidence could be coincidence, we cannot exclude the possibility that these earthquakes were induced by hydrocarbon production activities. 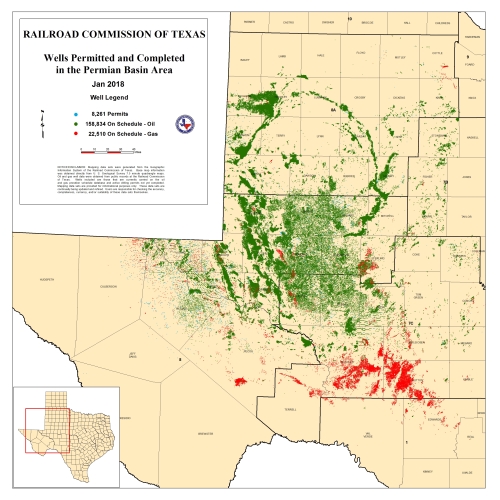 Bottom line: Researchers from Southern Methodist University in Dallas analyzed radar images from an oil-rich region in West Texas, which is having a resurgence in active drilling due to hydraulic fracturing (fracking). They’ve found that large portions of four Texas counties in the Permian Basin are both sinking and uplifting. In one place, the ground has shifted 40 inches (about a meter) over the past two-and-a-half years.